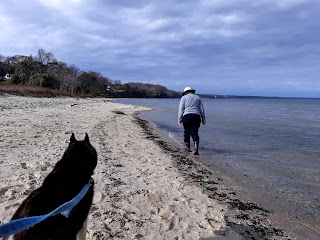 Ten years ago today, around 7 PM, I pushed the submit button on the First  Post for A View From the Beach:

This is the first post of my new toy, A View from the Beach. I intend it as something of a journal, but I hope that others may find value in its content. I may discuss science, fishing, music or politics, or I may post a picture from a walk on the beach. You are welcome to join in on the comments. For today, a picture from the beach.

Apparently, not too much has changed. Oh, We've gotten older, and I retired from being an active scientist, to become a mere commenter. Our health is pretty good, considering, although I've experienced some "interesting" complications with my eyes, which I've thoroughly documented. I Can See Clearly Now..., Ah, the Joys of Aging..., The Joys of Aging - Part Deux..., The Joys of Aging - Part Trois...,  The Joys of Aging: Part Quatre . . . and So Here It Is . . .. My eyes have been more or less stable since then, and although I have huge floaters in my left eye, the right eye is very good, and I consistently test around 20/20 with my glasses.

Along the way, I have lost both of my parents, not particularly unexpectedly, and acquired three grandchildren, Graham, Miles and Gabrielle (aka Gabby).

Georgia and I still live in the same house near the shores of Chesapeake Bay, and we still walk the beach with a Siberian Husky named Skye, albeit a different husky.

You can see at least two times that fairly sudden drops in the hits occurred. I assume this is due to changes in Google search algorithm.
I haven't quite achieved Althouse's standard of at least one post a day; a few times travelling, and one internet outage prevented that, but on the long term, I manage 3-4 a day. I try to have a post on the Chesapeake Bay nearly every day, which may be just pictures from a walk at the beach, or a post on news which interests me from the Chesapeake Bay news service. In the past several years, especially since retirement, I have had one major political post each day, usually in the AM. These started with Obamacare Schadenfreude, then Clinton.com, Reasons Trump was Elected, Russiagate and recently Election 2020.

My most popular posts, are of course, the "Rule 5" (everybody loves a pretty girl) posts, which I try to have one every morning for the morning eye opener. although, I may get multiples if the news offers a juicy opportunity. This has been assisted by Wombat-socho at the The Other McCain, who posts a list of Rule 5 posts weekly. The singly most popular post of all time, head and shoulders above all the rest for some weird reason, is this Zombie post, even though it isn't as racy as many others.

I considered ending this at 10 years. It does consume a lot of time that I could be fishing or playing with Gabby. But I've decided to continue, at least for now.

Email ThisBlogThis!Share to TwitterShare to FacebookShare to Pinterest
Labels: blogging, Georgia, Me, Skye