Election 2020: Is The Kraken Floundering?

On behalf of several Republican Presidential Electors, Powell — joined as Plaintiffs’ counsel by famed Atlanta trial attorney Lin Wood — filed a 104-page complaint that begins with the allegations that the Dominion voting system sold to Georgia was originally designed for, and used by, Hugo Chavez to ensure that he never lost an election as President of Venezuela. The complaint alleges that various uncontrolled and open parts of the software architecture are designed so that real-time activity logs can be modified to delete activity involving vote switching and/or addition/subtraction from the accumulated vote totals in such a way that the activity would not appear on the activity logs as part of an audit.

She alleges that video from the State Farm Arena in Fulton County, where vote counting activity involving mail-in ballots took place, documents that a false claim of a water main break was used to evacuate the area of all election workers and observers involved in the counting of ballots for a period of two hours, but that a small number of election workers remained behind working at the computer terminal on vote tallying without any supervision or observation by outsiders for nearly three hours.

Breitbart, Sidney Powell Files Lawsuits Challenging Election Results in Georgia, Michigan. Matt Vespa at Town Hall, Here's the Part of Sidney Powell’s Lawsuit That Could Impact the Outcome of the Election. The number of votes likely cast be people from out of state, which can be documented, and is sufficient cover the margin between Biden and Trump.

“To me, the easiest way to reach that goal is something much simpler alleged in the complaint at paragraph 121: That thousands of specific, identifiable voters, cast ballots after they moved out of state as evidenced in their registration in a national database, and may even have cast votes in their new states also which can easily be checked against the other state’s records,” she added. 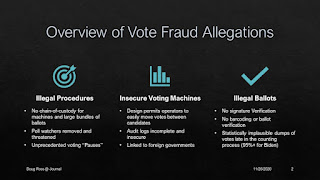 Sundance at CTH, Doug Ross Journal Creates Infographics of Sidney Powell Georgia Lawsuit…  "Our good friend Doug Ross has created a series of great INFOGRAPHICS that outline the stunning evidence, discoveries and allegations within the recent lawsuit filed by Sidney Powell" and Andrea Widberg at AmThink, Help is on the way for understanding Sidney Powell’s Georgia complaint

Capt. Ed at Hot Air, Krakens Released: Powell Publishes Lawsuits In GA, MI Alleging Massive Fraud. He doesn't think too much of them. And George Conway found spelling errors in the 100 page filing! Sidney Powell Files Election Suits In “DISTRCOICT” Court, and a stickler for proper language, Althouse chimes in with First impressions maahttter. Let he (or she) who has never left a typo in their final product cast the first stone. It won't be me.

A number of users across Twitter have reported being unable to share links to lawyer Sidney Powell’s lawsuit relating to voter fraud in the 2020 Presidential election. When attempting to share the link to the document, users receive a notification stating that the link has been identified as “potentially harmful.”

And evidence of the fraud continues to surface, The Spectator, The Intimidation and Unfair Enforcement of Detroit's Election, Leah Barkoukis at Town Hall, GOP Poll Watcher and Fraud Expert Gives Explosive Testimony About What He Observed Happen in Delaware County

Gregory Stenstrom, a Navy veteran and forensic computer scientist, testified Wednesday before the State Senate Majority Policy Committee hearing in Gettysburg, Pennsylvania, about an election process in Delaware County he described as being “forensically destructive.”

“In all cases the chain of custody was broken,” the GOP poll watcher said. “It was broken for the mail in ballots, the drop box ballots, the election day USB card flash drives." 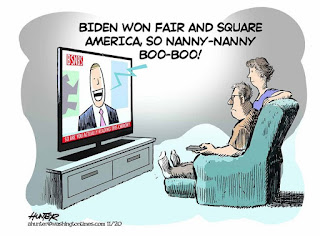 The addresses listed on the rolls included information that didn't make sense for the locations, but appeared on paper to look like residential ones, the newspaper also reported.

Some of the locations were UPS and FedEx locations.

Nearly all those "who disguised a postal facility as their residential address" used an absentee ballot to vote, Braynard said.

Georgia election law states that “the residence of any person shall be held to be in that place in which such person's habitation is fixed, without any present intention of removing therefrom."

It also states that anybody who knowingly gives false information when registering as an elector can be charged with a felony and put in prison for up to 10 years or fined up to $100,000.

The Bookworm Room, Busting all the Democrats’ lies about election “security” "Everyone should watch Russell Ramsland’s 45-minute presentation about the ease with which computer voting systems allow election interference."  David Solway at Am Think,What the Election Will Come Down To
The Stream, Letting the Democrats Steal This Election Is Real Appeasement “You were given the choice between war and dishonour. You chose dishonour, and you will have war.” ― Winston Churchill, to Neville Chamberlain."

Political betting markets still give Trump a >10% chance, both nationally and in several states where *results have been certified*. As I've said before, it's a bit alarming there are so many delusional people out there that the market equilibrium is this detached from reality. pic.twitter.com/SiKXccMvE8

Insty, Given Nate Silver’s track record, maybe he shouldn’t be throwing shade here. Also, THAT WAS DIFFERENT, BECAUSE SHUT UP:

Obama says mail-in ballots can only be trusted if the signatures are verified. Go figure! pic.twitter.com/by0WZiVlJr

“We do not agree with offering congratulations in advance,” President Obradord told reporters on Wednesday. “What’s the best thing? For us to wait.”