On paper, the day dawns with the Presidential race still unsettled, but the prospects for Trump winning a clear victory somewhat diminished. All the states still uncertain yesterday (AK, NV, AZ, GA, NC and PA), but additional counts from "mail in ballots" in have brought Georgia into the Biden leaning side by an extremely thin margin, about 1000 votes. Similarly, the Trump lead in Pennsylvania has narrowed to 19,000 from an original 600,000 vote margin. To win a clear victory, Trump needs all his "leaners" (AK, NC and PA) and Georgia plus something else. Trump is still looking first at Arizona for that something else (Wow! Even CNN & MSNBC Admit That Trump Appears to Be on Track to Win Arizona) but the margin looks rather beefy to me, unless Maricopa County is a Trump gold mine.

I would like to point out that in every contested state except NC, the Libertarian candidate, Jo Jorgenson has more votes than the margin between Trump and Biden! Republicans need to look at that result as a sign that they need to court the Libertarian movement, which I feel is a better fit with Republicans than Democrats, although to be honest, Trump is not the best spokesman there, despite his fantastic work on deregulation. 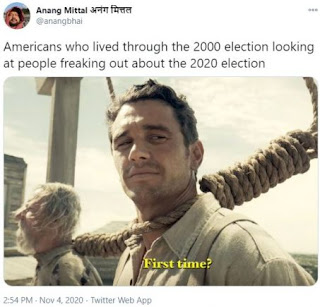 
Why is it that rural counties with comparatively few resources can manage to count all their votes on Election Night, while America’s major cities still haven’t finalized their totals by Thursday?

Democrats should be asked that question, because it says an awful lot about what’s wrong with the Democratic Party, which governs all the places where they haven’t finished counting votes yet — Detroit, Atlanta, Philadelphia, Milwaukee, etc. If there were no other issue to divide the American people, the gross incompetence of Democrat-controlled governments would be sufficient to justify GOP opposition. . . .


Yes, you would think that with machines to count ballots, results should be near instantaneous, but there seems to be be some psychohistorical principle that the more people involved in a process to slower, more cumbersome and prone to error and cheating it becomes. FEE, Government Can't Count Ballots. How Can It Possibly Manage a Pandemic or Our Health Care?, Da Blaze, Georgia secretary of state said this morning there were under 25K uncounted ballots remaining. Now his office claims there are over 60K. "Hmm". Stephen Kruiser, PJ Media,  Dems Have Turned U.S. Elections Into a Third World Embarrassment. Like pretty much everything else they control. 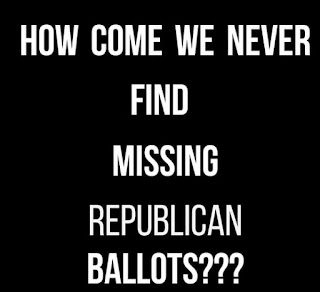 Ah yes, cheating. Is it or is it not going on? If it's not going on, the vote counters in Detroit, Philadelphia and Atlanta are going to a lot of trouble for nothing. Larwyn’s Linx: 23,277 Ballots “Found” In Pennsylvania, All Mysteriously For Biden, 23,277 Ballots “Found” In Pennsylvania, All Mysteriously For Biden, Michigan, Wisconsin Elections Officials Refuse To Explain Sudden Biden Vote Influx:, Michigan Found Over 100,000 Ballots and Every Single One Has Joe Biden's Name on It, This Election is Being Stolen and President Trump Must Fight Hard to Prevent That From Happening: 90% voter turnout in Wisconsin explained as seven Milwaukee districts report higher than 100%. Plus plenty more links at the Wombat's In The Mailbox: 11.05.20 and JJ Seftons The Morning Report - 11/6/20 at Aces.

Tilting at Windmills, There's A Reason People Suspect Fraud - Especially when you look at some of what's been reported in Georgia alone,

Fulton County told our observers last night to go home because they were closing up and then continued to count ballots in secret.

Before I became a novelist I was an accountant. In auditing you look for red flags. That’s weird bits in the data that suggest something shifty is going on. You flag those weird things so you can delve into them further. One flag doesn’t necessarily mean there’s fraud. Weird things happen. A few flags mean stupidity or dishonesty. But a giant pile of red flags means that there’s bad shit going on and people should be in jail. . . .

The MacIver Institute found that nearly 200,000 voters marked themselves as indefinitely confined ahead of Wisconsin’s presidential primary and an additional 49,769 did so in the six months since. So 250K people in WI required no Voter ID. Unbelievable!! 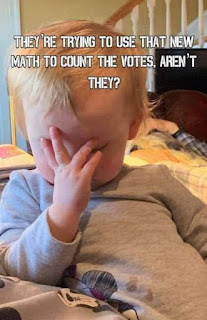 Andy McCarthy at NR, No, Every Vote Does Not Count "Voting Rules & Election Day: Democrats Deliberately Undermine Them". Roger Kimball at Da Spec, The 2020 election could be a bigger scandal than Russiagate, Battle Swarm Blog, What Can You Do About A Stolen Election?
Trump actually dared accuse the Democrats of cheating! Post Millennial, President Trump claims he has proof that Democrats are attempting to steal the election. Althouse has the text. I think it's valuable to read the transcript and judge Trump's words on their merit, not just to remember how you felt as you heard this... Read it, and without hearing Trumps voice, it doesn't sound that bad.
And some miscellaneous elections stuff. Steven Hayward at Power Line asks Dude—Where’s My Landslide?, referring to the "Blue Wave" widely predicted by polling outfits and the media. Frank Luntz atop Da Hill, Polling profession 'done' after election misses: 'Devastating to my industry'. Good. AllahPundit at Hot Air whines Wait, Do Republicans Actually Have A Chance Of Winning The House?. Yes, but a very small one. House votes are hard to cheat on because they're done at a more local level. 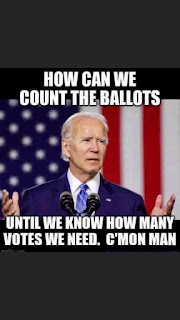 Would Biden even want to be president knowing he’ll have to negotiate with Mitch McConnell — and Kevin McCarthy? If those remaining districts flip red and the GOP gets to 218, he might as well walk out today and say, “Trump’s right, I cheated. He won. I’m going to go play golf.”

But wait! According to the NYPo, ‘Faithless electors’ present scenario that could keep Trump in White House. Not gonna happen