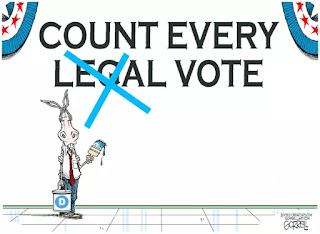 Let's start off with the story of the Erie (PA), Post Office whistleblower. From yesterday we know he signed an affidavit saying he overheard conversations concerning the backdating the postmarks of mail-in ballots, and had been interviewed by a postal Inspector General. Later that day, the WaPoo published a story Audio recording shows Pa. postal worker recanting ballot-tampering claim according to their anonymous source, clearly the postal IG team. WaEx, Take the Washington Post’s report on the ‘recanting’ election fraud whistleblower with all the grains of salt. Via the Wombat's In The Mailbox: 11.12.20 (Morning Edition), Jeff Dunetz at Da Lid is a little stronger, The Washington Post Lied: The Postal Whistleblower DID NOT Recant. Sundance at CTH, Post Office Whistleblower Denies Recanting Statement Witnessing Ballot Fraud – Demands Washington Post Retract False Claims… and Project Veritas Releases Full, Unedited, Audio of USPS Whistleblower Coercive Interrogation… and Ace, The Whistleblower Wore a Wire: James O'Keefe Releases Full Video of Postal Inspector's Threatening of Election-Fraud Whistleblower and finally, Project Veritas itself, Marine Veteran & USPS Whistleblower Richard Hopkins Stands By Original Account: I Did Not Recant; Hopkins Describes More Than Three Hours Kept in Room Without Lawyer or Union Rep With Post Office Agents: ‘Grilling the Hell Out of Me…I Just Got Played’. The full interview is at more than one of those links, including the last, but I think it's pretty clear that the upper echelons of the PO went nuts when this guy came forward, and sent the IG to take care of the problem. He thought he had enough to shake the story, but the Marine vet won't back down.

Today it is necessary to consult multiple sources to deteremine the basic facts. The day of single-sourced information is over.https://t.co/4PQ9TIRX7i

So, other than that, Mrs. Lincoln, how is the situation in Pennsylvania? Sundance, Data Conflict – Tens of Thousand of Pennsylvania Ballots Returned Earlier than Sent… A lot of funny stuff happening with dates, trying to get inside Justice Alito's line. From Da Week, Biden's Pennsylvania lead is now big enough to avoid an automatic recount. No bottom to the barrel of "found" ballots, however, WFMZ, Pennsylvania rank and file lawmakers demand legislative audit before certifying election results. Front Page, Dem Op Convicted of Election Law Violations Helped Dems in PA. Has to have been a stupid one to get caught the first time.

And Georgia? JD Davidson at Da Fed, Despite State GOP Claims To The Contrary, Georgia Is Ripe For Election Fraud.  PM, Georgia to conduct HAND RECOUNT of votes. That should be fun. Capt. Ed at Hot Air in red headline, Breaking: Georgia SecState Orders A Full Hand Recount In Presidential Race; Update: Audit And Recanvass Too, and NYT columnist Tom Friedmann urges out of staters to commit voter fraud in the upcoming Senatorial runoffs. WaFreeBee, New York Times Columnist Urges Democrats to Commit Voter Fraud in Georgia. And they call us paranoid.  From Pirate's Cove, Is This Something? Guiliana Claims Whistleblowers Are Coming Forward From Dominion. This one's a bit of tinfoil hatter, would they cheat that obviously? If so the hand recount will actually work:

This is an excellent analysis of how "the glitch" worked by @va_shiva and team.

Via Hot Air NYT insists No, Dominion Voting Machines Didn’t Cause Widespread Voting Problems. And we know the NYT would never lie to help the democrats, am I right

Brianna Kraemer at JTN, Kayleigh McEnany says lawsuits will likely make it to the Supreme Court in weeks to come. Capt. Ed, WaPo: Trump’s Fraud Claims Are Getting Tossed Out Of Court. Sundance,  Kayleigh McEnany Provides Examples of Ballot Fraud in Wayne County Michigan… video at link. But Jeff Charles at Red State, Members Of Corporate Press Play Dumb And Demand ‘Evidence’ After Being Told Of Affidavits And Incident Reports Alleging Voter Fraud. Too many examples to list.Matt Vespa at Town Hall, Hail Mary: Here's the Number of Biden Ballots That Need to Be Invalidated In Order to Get the House Involved  John Sexton at Hot Air VIP, Karl Rove: The Election Results Won’t Be Overturned.Which may be true, but it absolutely can't happen if Trump doesn't try.

The most corrupt institutions and individuals in America have declared that the election was free of fraud, and that's good enough for me. What's wrong with the rest of you?


Oregon’s elections director was abruptly fired in a text message by the secretary of state after he pointed out serious issues with the state’s aging and vulnerable technology for running elections.

Elections Director Stephen Trout learned in a text message Thursday night - as his department and county elections officials were still counting votes from the Nov. 3 election - that he was out.

A County Legislature seat in MI flipped last week from a 104 vote loss for the GOP to an 1,127 win.

Why is @SenToomey rushing this? Gore dragged 37 days, and FOUR justices were willing to extend it.

Jason Pierce at Da Fed, Democrats Know Mail-In Voting Means Mass Fraud, And Pushed It Anyway. No, that's why they pushed it.
At Ace's The Morning Rant

Here are three things the media really don't want you to realize:


1. Joe Biden is not the president.

2. Joe Biden is not the president-elect.

3. All we have right now are media projections.

Because they're pushing the "JOE BIDEN IS PRESIDENT NOW SO SHUT UP!!" narrative hard, I mean really hard right now. So hard, in fact, that we're rapidly getting into "methinks they doth protest to much" territory, as if they're really afraid of something. My impression is that they fear the Biden victory which they fervently hoped for, and thought they had received, is slowly but inexorably slipping away.

A Thread, At this point it looks like we're headed towards a fairly predictable timeline of events. Here is where we've come from and here is where we I see this headed:

There is no voter fraud: msn.com/en-us/news/pol…

There is no widespread fraud:

Those are just glitches:

Hand sanitiser build-up causes Iowa ballot machine to go offline for one hourHand sanitiser has clogged a ballot scanner at one US polling station and a printing error has caused counting delays in another part of the country, but the nation's Department of Homeland Security s…https://www.abc.net.au/news/2020-11-04/us-presidential-election-technical-issues-minor-voting-delays/12846630

There are frauds but they won't change the outcome:

Even if fraud happened SCOTUS won't be able to do anything:

This is where we currently are. So where is all this likely headed?

Future headlines to look for:

The Supreme Court is illegitimate because Trump picked the justices!

Barrett, Kavanaugh, Gorsuch and Thomas must recuse themselves! Any and all must recuse!

Republicans are cheating the system. They must in good faith accept that Biden is President. It’s patriotic to avoid riots and possible civil war.

You overturned the elections. How could you change the will of the people? We need intervention and mobilization, NOW!

Conclusion: Ive used a variety of legacy media outlets to source this. They're all complicit and are responsible for fueling what may be coming. It is entirely irresponsible and clear that since 2016 have refused any self reflection or responsibility. Expect the same and more. 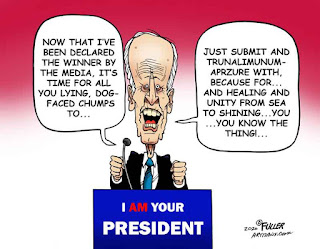