Defense Attorneys Sidney Powell, Lin Wood and others have filed a lawsuit in Georgia demanding that the results of the 2020 election be set aside because of “massive election fraud” and foreign influence in the election. The lawsuit claims that 96,600 mail-in ballots “were fraudulently cast” and that “136,098 ballots were illegally counted as a result of improper manipulation of the Dominion software.”

Powell, a high-profile attorney who represents former Trump National Security Advisor General Michael Flynn, asks that the governor be enjoined from certifying the election. The 104-page lawsuit claims that Gov. Brian Kemp, Sec. of State Brad Raffensperger, and the chair and members of the Georgia State Elections Board failed to police the alleged fraud, including “multiple violations of Georgia laws, including O.C.G.A. §§ 21-2-30(d), 21-2-31, 21-2- 33.1 and §21-2-522, and multiple Constitutional violations, as shown by fact witnesses to specific incidents, multiple expert witnesses and the sheer mathematical impossibilities found in the Georgia 2020 General Election.”

The lawsuit, co-filed with attorney Lin Wood and an Atlanta attorney, asks a judge to set aside the results of the election in a permanent injunction; enjoin elections officials from certifying the election; demands that all voting machines be subjected to forensic assessment; and asks that election officials produce 36 hours of surveillance video of “all rooms used in the voting process at State Farm Arena in Fulton County, GA from 12:00am to 3:00am until 6:00pm on November.”

The lawsuit, filed on Wednesday, also alleges that Georgia’s sloppy mail-in balloting was responsible for thousands of shady, illegal votes.


Plaintiff’s expert also finds that voters received tens of thousands of ballots that they never requested. (See Exh. 1, Dr. Briggs’ Report). Specifically, Dr. Briggs found that in the state of Georgia, based on a statistically significant sample, the expected amount of persons that received an absentee ballot that they did not request ranges from 16,938 to 22,771. This range exceeds the margin of loss of President Trump by 12,670 votes by at least 4,268 unlawful requests and by as many as 10,101 unlawful requests.

She alleges that voters were denied their due process because the fraud diluted their votes and treated the mail-in ballots differently in different counties, which is similar to what Trump attorneys have alleged in the Pennsylvania election case.

The lawsuit alleges that “rogue actors” were able to manipulate the voting software.


Russell Ramsland confirms that data breaches in the Dominion software permitted rogue actors to penetrate and manipulate the software during the recent general election. He further concludes that at least 96,600 mail-in ballots were illegally counted as they were not cast by legal voters.

“To the extent that there remains any further action to perfect the certification of the results of the 2020 General Election for the offices of President and Vice President of the United States of America, respondents are preliminarily enjoined from doing so, pending an evidentiary hearing to be held on Friday,” read the injunction from Judge Patricia McCullough. . . .You can read the entire order here.

Pennsylvania Attorney General Josh Shapiro, a Democrat, has promised to appeal the decision but also claims the order has no bearing on the results, as the election was already certified and electors chosen.

State Rep. Mike Kelly, a Republican, is responsible for the lawsuit that sought the injunction, which was prompted by the certification of the results on Tuesday. “It appears that respondents’ actions may have been accelerated in response to the application for emergency relief … in an effort to preclude any remedial action by this court faster than this court was able to evaluate the application for emergency relief and the answers to it,” the plaintiffs wrote in their emergency request to halt the certification.

Paul Bedard at WaEx, Huge court win lets Trump present ballot evidence, could overturn Nevada result, Sundance, Nevada Judge Sets December 3rd As Date To Hear Election Fraud Evidence… also, Rudy Giuliani Recaps Election Fraud Lawsuits With Lou Dobbs: Pennsylvania “Mailed out 1.8 Million Mail-In Ballots, Got Back 2.5 Million”…
FWIW, I've seen that number disputed.
Newt Gingrich at ET, The Thieves Who Stole Our Election Got Sloppy. JB Shurk at Da Fed, 5 More Ways Joe Biden Magically Outperformed Election Norms. Ace responds, The Federalist: Joe Biden's Unprecedented, Statistically Unlikely, History-Defying Magical Election "Victory" "They just straight up executed a coup. . . .And of course they'll now cover it up -- and harass, beat, and imprison anyone who notices. . . .Treason never prospers, for if it prospers, none dare call it treason." Roger L. Simon at ET, The Smartmatic Story: From Venezuela With No Love.
If anything upsets the WaPoo more than the President challenging and losing, it's the President challenging and winning, You don’t have a ‘right’ to a lawyer when you’re trying to steal an election and Trump’s assault on the election could leave a lasting mark on American democracy. Dan McLaughlin at NR, Oh, Now Democrats Care About Legitimacy

Suddenly, Democratic partisans are in high dudgeon at Donald Trump and his legal team spreading irresponsible and self-defeating stolen-election conspiracy theories. For example, the Washington Post’s Greg Sargent complains that Trump’s approach is “designed to place a cloud of illegitimacy over Biden’s presidency.” Julie Pace and Steven Sloan of the Associated Press fret that “Republicans risk leaving millions of Americans with the false impression that the results of the 2020 race are illegitimate. . . . Biden will almost certainly be viewed as an illegitimate president by some voters, potentially denying him that period of goodwill that typically greets a new president.” They quote Obama adviser Valerie Jarrett: “Their intent is to delegitimize this election and thereby delegitimize President-elect Biden’s presidency. It is damaging to the democracy. Once again they’re putting their short-term political interests ahead of the interests of the country.”

Well, well, well, how the worm has turned. Are Democrats and their media partisans actually against undermining the legitimacy of American elections and weaponizing that to weaken the presidency? Some of us were not born yesterday. As has often been the case, the real problem with Trump’s rhetoric is that it comes straight out of the Democratic playbook for undermining the legitimacy of an American election.

Alright, one more. This might've been the most celebrated New York Times op-ed of December 2016, when the Electoral College subversion scheme was really gaining elite momentum. Anyone who tries to tell you this stuff didn't happen is lying pic.twitter.com/ouzJW08r0F

Politico whines,  The Inside Story of Michigan’s Fake Voter Fraud Scandal and Trump carries on a fight everyone else is abandoning "The campaign has gone quiet — no briefings about legal fights, few tweets, a dwindling crew. But Trump is still clinging to the White House." He's still President until Jan. 20, at a minimum.   Time to try accuse some Democrats for violations of the Logan Act! Beth Baumann at Town Hall, State Legislators In Three Swing States Were Caught Off Guard By the Trump Camp's Latest Announcement

The Trump campaign on Tuesday announced that legislatures in key swing states – Pennsylvania, Arizona and Michigan – would hold hearings on alleged voter fraud. Legislators in those states, however, say nothing is scheduled to take place. 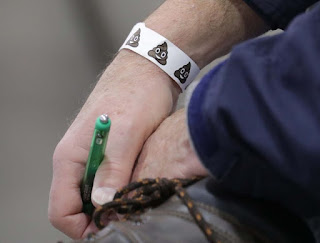 And something light? From Milwaukee, On day five of election recounts in Milwaukee, all observers were given poop emoji wristbands from Wisconsin Center staff

"I always thought it was chocolate ice cream, personally," Christenson said when asked about the poop emoji wristbands. "Wisconsin Center is our vendor. They handle the logistics. They are probably just pulling what they have in stock, because this is the first opportunity they've had to be open in quite some time due to this pandemic. So again, it's a non-issue. Everybody got one."