A Fair Breeze and Following Seas

I got this a few days ago on a Facebook group that a few renegade fishermen and I follow, from Capt. Ed Robinson, a former charter guide, turned author, who I knew mostly from the internet but had fished with on a few occasions:

We always think we'll have more time, but this is ridiculous, (and the truth). I got sick a few weeks ago - now I'm a dead man. Cancer has devastated my internal organs - Liver, colon, lungs, bones, etc.

I can't be made well enough for treatment or surgery.
I might not make it through the night or I might make it a few more weeks, tops. Hospice is on the way.

I have not had the time for a self-pity party, but the lovely Miss Kim could certainly use some prayers. (maybe buying some of my books would be helpful.

Thanks to all who have touched my life one way or another. Most of the time I have plenty of words. Tonight I'm coming up short.

Followed only a couple days later by news of Ed's passing. 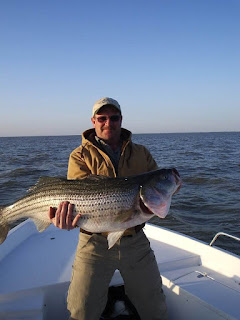 Ed was a working guy (and a charter guide) in Maryland. After a terrible accident to Miss Kim, followed by a healthy settlement, Ed threw away his job, bought a boat called the Leap of Faith and wrote a book by the same name and moved to Florida. In Florida, he began to write books about person with a similar life trajectory named Breeze. He ended up with 8 books about Breeze, so I guess he was a pretty successful author. I read 3 of the first, but it's not really my genre, so I haven't followed them all.

It the meantime, after surviving, with much distress, several hurricane encounters in Florida, Ed and Kim bought a house in the mountains of North Carolina, where he continued to write.

A link to Ed's site is located on my right wall, Capt. Ed's Boat, so if you're interested and want to read a crime novel or two about live-aboard boating set, and help out Miss Kim at the same time, that's a way to do it. Or, of course, there's a GoFundMe site with the misleading name Help Ed and Kim beat Ed’s cancer.