Election 2020: Enough Fraud to Go Around

Despite media assurances that 1) there is no fraud, 2) Well maybe a little, but not enough to matter and 3) Nya nya nya, you can't catch us, President Trump is starting to win some. At PJ Media, Matt Margolis writes of Huge Legal Victory for President Trump in Pennsylvania, while at Am Think, Andrea Widburg says President Trump achieved a small, but significant victory in Pennsylvania, AllahPundit sadly admits Pennsylvania Court: Secretary Of State Lacked Authority To Extend Deadline For Proof Of ID By Mail Voters and Ace, Pennsylvania Court Countermands PA Secretary of State's Lawless Decree Extending the Deadline to "Cure" Defective Ballots. Nobody seems to know quite how many ballots are at stake (maybe 10k, maybe more), but since the mail in ballots went heavily for Biden, this will certain hurt his count. Probably not enough to turn the elections though. Maybe this one can help, Trump Campaign’s Latest Lawsuit in Pennsylvania Will ‘Prevail’: Murtaugh (ET):

“Depending on where you were in the state and when you voted, you were treated differently,” he said.

The Trump campaign filed a lawsuit (pdf) a day earlier against Pennsylvania Secretary of State Kathy Boockvar and seven county boards of election—Allegheny, Centre, Chester, Delaware, Philadelphia, Montgomery, and Northampton, claiming that “almost every critical aspect” of the state’s election was “effectively shrouded in secrecy.”

It alleges that the Pennsylvania election process violated the Constitution by creating different standards of verification and transparency for mail-in and in-person voters, as well as disparate treatment of Republican and Democrat voters and poll watchers.

Trump campaign legal counsel Matt Morgan told reporters Monday that in Philadelphia and Allegheny, there were over 682,000 ballots that were tabulated outside the view of GOP observers who were entitled by law to review them. 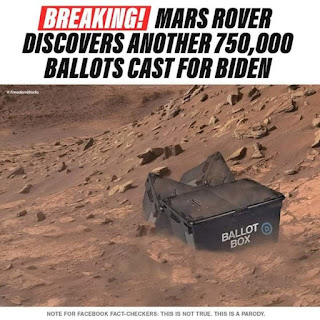 However, from WaEx, Rudy Giuliani claims 650,000 votes were counted unlawfully in Philadelphia and Pittsburgh


"We now are up to a count of about 650,000 ballots that are unlawful ballots that were cast in Philadelphia and Pittsburgh," he said in an interview with Fox Business's Lou Dobbs. "No doubt about the fact they're unlawful."

Giuliani added that "almost none" of the ballots were observed by a Republican. It is unclear in that comment to what specific region he was referring. He did not provide proof to back up his claim.

I don't doubt it, but can he prove it to a courts satisfaction? Meanwhile from Project Veritas via Gateway, more evidence that the PO has it's thumb on the scales, in this case post-election, Project Veritas: USPS Whistleblower in Philly Suburb Details Orders to Stop Delivering Trump and Republican Mailings (VIDEO). Old meme, PO is going to cheat for Trump; New meme, the PO is brave and honest and wouldn't cheat to help Biden. Wa Free Bee, Democrats Went Postal With Sabotage Claims,  Lawrence Person's BattleSwarm Blog, Every MSM Outlet: Postal Voting Fraud Whistleblower Recants! Whistleblower: No I Didn’t! Jeffrey Lloyd at Am Spec, Pennsylvania GOP Legislature Launches Investigation Into Election

It's truly amazing to look back a few months ago when Democrats were fretting that the president was manipulating the Postal Service to rig the election.

It was a conspiracy given full legitimacy by the media that now won't even entertain fraud claims.https://t.co/7hYfZKyKME

And Michigan? John Solomon reports Multiple Michigan residents swear they witnessed widespread voter fraud in Detroit and from WaEx, GOP Michigan poll watchers swear they incurred 'intimidation' and 'threats of assault', so it was a "mostly peaceful" election? The Western Journal,  Lawsuit: Out-of-State Vehicles Brought Tens of Thousands of Unsealed Ballots to Michigan, All for Dems  Seriously though, the inventor of email, Geller, MIT PhD Analysis of Michigan Explains How Algorithms Re-Tabulated Trump Votes to Flip to Biden. Sundance at CTH, MIT PhD and Statistician Outlines Algorithmic Fingerprint Within Vote Data… Joan Nova, Electronic vote fraud equation revealed: In Michigan in 4 counties 138,000 Fake votes for Biden and Libertas Bella, Michigan Election Fraud: Evidence of Wolverine State Chicanery During America’s 2020 Presidential Election MIT Ph.D. V.A. Shiva believes he has statistical "proof" that Trump votes were being stolen and assigned to Biden by the voting software. Basically, in any precinct above about 20% Trump votes, a percentage was being "shaved" and assigned to Biden. The 20% prevented it from being readily apparent on the ground. This should become readily apparent if an actual hand count of ballots shows a discrepancy. Also, it should be readily apparent if the machines code is examined, and if the machines are tested (if they haven't been reset). If so, there should be hell to pay. And, on that cue, Sundance, Michigan State House Representatives Request Ballot Audit Before State Certification… also, IT Contractor for Dominion Ballot Counting Software Co. Exposes Massive Ballot Fraud in Detroit Michigan…


In for a penny, in for a pound. The Red Elephants, Data Analysts Claim Glitches Similar to Those in Michigan May Have Occurred All Over the Country.
Jazz Shaw, Hot Air, Texas Nursing Home Worker Charged With 134 Counts Of Election Fraud. Breitbart, Connecticut GOP Lawmaker Discovered Winner After Race Called for Democrat. From Down Under at News.AU, ‘Slow leak’: Text messages cast doubt on Georgia officials’ ‘burst pipe’ excuse for pause in counting "An “unprecedented” decision on election night caused outrage – and now texts have blown apart the official story, raising more questions." Ace, Text Message Debunks "Burst Pipe" Excuse for Atlanta's Sudden "Pause" In Counting


First of all (and I can link this, because I'm not on Fox, being censored by the leftwing "brain room"):

Everyone understands that the fact that six Machine Cities in six Democrat-controlled swing states chose to "pause" the count at about the same time was no coincidence.

The stopped counting so that they could fake up tens of thousands of fraudulent "votes."

Twitchy, Arizona Secretary of State — who will certify election results — tweeted about Donald Trump ‘pandering to his neo-Nazi base’, and I'm sure she feels a moral duty to stop neo-Nazis.

AllahPundit whines, Trump Has Reached The “Diebold Rigged The Voting Machines” Phase Of His Voter-Fraud Pitch and Eric DeBruin at WaPoo, No, Trump is not attempting a ‘coup.’ Here’s why the distinction matters. Yet. Althouse, With Veterans Day accomplished, Trump launches into a hot morning of tweeting

From the last 14 hours (in reverse chronological order) on Trump's Twitter feed:


"OK, I’ve seen enough. What’s going to happen to these guys (McCabe, Comey & the gang of treasonous thugs)? @SenJohnKennedy @MariaBartiromo @TheJusticeDept They, and many others, got caught. DO SOMETHING!!!

"Who is he quoting?

That's a comment on an azcentral politics story that says "Biden's lead in Arizona keeps shrinking, but not enough for Trump to overtake him." . . .

“Without disagreeing with the conventional wisdom about the final tally when all the legal votes are counted, I believe the current consensus is missing the fact that Trump has a second, viable stealthy road to victory,” he notes. He predicts “the debate about who won will continue until at least January 6 when slates of electoral college members are opened in Washington” and that the result will “likely” be “appealed by the loser to the Supreme Court.”

A tinfoil hatter thread? Could China have fixed the election for China Joe?

1/ Ok I’m going to briefly lay out a speculative theory that fits what we currently know.
2/ I’m speculating that China acted to interfere in the election.
Trump admin, via CIA, DOJ, State and other agencies were aware and monitoring.
3/ They followed the Obama precedent and monitored instead of intervening.
4/ They are able to know, because of their monitoring, that Trump won based on the legal ballots.
5/ As it is an active investigation, Trump can’t discuss it publicly. The details also could not be shared with his campaign. So any campaign efforts would need to be based on public information and information collected by the campaign.
6/ That scenario would explain why Barr and Haspel went to see McConnell and why McConnell is supporting Trump in contesting an election that seems lost.
7/ It could also explain why the Trump admin is avoiding briefing Biden, particularly if, as I suspect, Biden is unaware of China’s actions. Remember Trump says it can never happen to another President what they did to him and Flynn. They used the briefing to target.
8/ This would be an incredibly sensitive investigation and would require only certain people be read in. Which would explain why Republican Senators unaware are saying Biden should be briefed while McConnell is not. They haven’t been read in.
9/ This would also explain why Pompeo is so certain there will be a second term. Something the Secretary of State doesn’t say from the State Department podium lightly.
10/ Anyway again this is speculation. /end