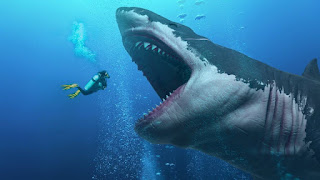 
Ancient giant predatory sharks made use of nurseries to rear their young millions of years ago, according to a new study investigating fossilised megalodon teeth.

Five potential nurseries, dating from 3.6 to 16 million years ago, have been identified by University of Bristol researchers using fossilised teeth of different lengths.

Slow to reproduce, megalodon nurseries likely contributed to the success - and later demise - of this iconic top predator, the authors discovered.

They examined nine areas where megalodon remains have been found, and say five may have been nurseries, because most of the remains found there were from newborn or young juvenile animals.

Slow to reproduce, megalodon nurseries likely contributed to the success - and later demise - of this iconic top predator, the authors discovered

Nursery areas are fundamental for the success of many marine species and play a key role in maintaining viable adult populations, the researchers explained.

As part of the study, the international team - from the US and UK - examined the size-class structure of the extinct gigantic shark through these potential nursery sites.

Otodus megalodon is the largest shark to have ever lived, with body length estimates of up to 50–60 feet for the largest adult individuals.

People say that the most of the Megalodon teeth found in our area are small, 1-3 inches, suggesting that the region may have been a nursery area. This was before the Chesapeake Bay existed, and the whole region was an Atlantic coastal zone. Given the abundance of fossils, from shells to fish and whales, it was clearly a very productive area. Even a Meg wasn't born big enough to take on a whale.

It frustrates me, though, that an article like this doesn't at least list the areas the scientists identified as Meg nurseries.