Russia/Biden/Electiongate: Stay Calm and Carry On

Not unexpectedly, despite Stacy McCain's early call the Presidential election is still undecided. If you believe the Decision Desk HQ guide, the current status is that President Trump currently holds 213 firm electoral votes, while Crime Boss Biden holds 227. Leaning to Trump, we have Georgia (16), North Carolina (15), Pennsylvania (20) and Michigan, (16), for a total of 67 electoral votes, enough to win. So, Biden would need to take all his "leaners" and one Trump state to win at this point. While Georgia, North Carolina and Michigan are all pretty close, the obvious candidate is Pennsylvania, where Trump holds what appears to be an insurmountable lead of 600,000 vote margin, before the fraud machines in Philadelphia and Pittsburgh get revved up.

On the Biden side, Arizona was called for Biden by Fox fairly late last night, and was the first state to be lost from Trump's 2016 coalition. It is still currently uncalled at HQ, but Biden seems to have a rather comfortable lead of 90K votes. I blame refugees from California, who, having ruined their own state, have moved on to threaten another.. His other "leaners," Nevada and Wisconsin have much narrower margins of 10k and 20k each. In these states, the margin is on the order of the number of votes to the Libertarian candidate, Jo Jorgenson. Biden leads the "popular vote" by approximately 2 million at this point, a decrease of a million from Hillary's triumph, quite likely a result of Trump's inroads into the Black and Hispanic communities.

“Barr’s letter claimed that we ‘did not find that the Trump campaign or anyone associated with it conspired or coordinated with Russia in its efforts to influence the 2016 U.S. presidential election.’ In fact, we had found a lot of evidence of the campaign coordinating with Russians; what our report actually said was that this evidence was not sufficient to charge the president or any of his campaign staff with a criminal conspiracy,” Weissmann wrote. “Any lawyer would know that the two are vastly different — and the attorney general surely understood the distinction. Yet Barr did not acknowledge that. Instead, he chose to say we did not ‘find’ a conspiracy or coordination — which slyly presented our report in laymen’s terms as a complete exoneration.”

Weissmann added: “Barr repeatedly stated that the special counsel ‘did not find’ that the Trump campaign conspired with the Russian actors. What actually happened is that we did not find sufficient evidence of a conspiracy to bring a criminal case — which requires proof beyond a reasonable doubt. It is not true that we did not find any evidence — what was what the Barr letter was widely interpreted to claim.”

Barr’s letter stated that Mueller’s report “outlines the Russian effort to influence the election and documents crimes committed by persons associated with the Russian government in connection with those efforts” and “further explains that a primary consideration for the Special Counsel's investigation was whether any Americans — including individuals associated with the Trump campaign — joined the Russian conspiracies to influence the election, which would be a federal crime.” The attorney general then wrote the line that Weissmann repeatedly maligned, saying, “The Special Counsel's investigation did not find that the Trump campaign or anyone associated with it conspired or coordinated with Russia in its efforts to influence the 2016 U.S. presidential election.”

Barr’s next line quoted directly from Mueller’s own report — something Weissmann barely did in his book related to this specific controversy — with the attorney general noting that the report said, “The investigation did not establish that members of the Trump Campaign conspired or coordinated with the Russian government in its election interference activities.” Weissmann’s book doesn’t mention that Barr quoted this line from Mueller’s report, and it does not quote this line from Mueller’s report either. 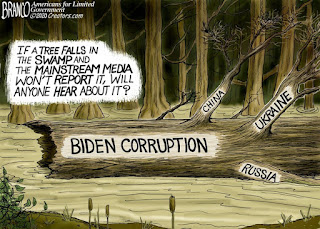 So, is he just trying to be a good father, and help Hunter out in the family's side hustle at the expense of American foreign policy, or is he somehow hiding the kickbacks to China Joe? I dunno, but I worry about China's influence, and black mail potential in a Biden administration. Natalie Winters at NP, Email Reveals Hunter’s Chinese Communist Party Business Partner Sought Meeting With ‘H And The Family’

The emails, dated May of 2017, show correspondence between James Gilliar, a partner on the CEFC venture, and Raymond Zhao who serves in CEFC’s “General Manager Office.”

CEFC, which boasts extensive ties to the People’s Liberation Army, is the same entity referenced in a New York Post exposè highlighting how Hunter Biden leveraged his father’s name to ink deals with the Chinese government-linked entity. The article also outlines how Joe Biden – or “the big guy” – may have benefitted financially from the deal.

In the email thread, “H” appears to be a reference to Hunter Biden.

Zhao writes the “Director would like to extend the following message to H” before insisting Ye, the Chairman, would be “more than happy to meet H and the family”:

“Chairman Ye is more than happy to meet H and the family in NYC on 5th or 6th of May. But the schedule is quite tight for the moment and they cannot decide on a time of meeting.