I guess I need to do this. After doing an "Evil" level Sudoku in under 9 minutes, and getting a Word Wipe score over 35,000 my brain should be adequately warmed up, but I'm not really feeling it. 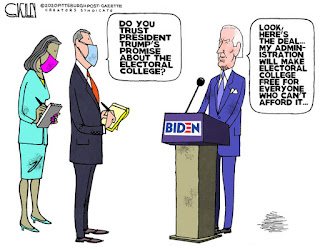 So where were we? Over the weekend, Pennsylvania Supreme Court Tosses Challenge to Vote-by-Mail Because It Came Too Late, saying the Trump campaign didn't file suit protesting the unconstitutional mail-in balloting before the election, so it's too late to actually follow their own constitution. Don't judges take oaths to uphold the constitution or something like that?  But (Da Caller), Trump Officially Wins Ohio As State Certifies Election Results, so that's something.

“You know what's even MORE suspicious than BIG vote dumps giving Biden the lead in WI and MI? Taking AWAY votes from

@realDonaldTrump in Pennsylvania!,” Hart tweeted Nov. 20 in a tweet that Trump retweeted on Tuesday. “This chart: the 25 data dumps where Trump LOST votes from the Dominion feeds. 97,676 votes LOST! And Biden GAINED 160K+ votes!”

You know what's even MORE suspicious than BIG vote dumps giving Biden the lead in WI and MI? Taking AWAY votes from @realDonaldTrump in Pennsylvania!

This chart: the 25 data dumps where Trump LOST votes from the Dominion feeds.

I can imagine why there might be case it would be necessary to subtract votes. But 25 times, and always Trump? If three time is enemy action, what is 25? TNP, DATA: Michigan Analysis Suggests Absentee Votes ‘Manipulated By Computer’, Flags Hundreds Of Thousands Of Ballots. Twitchy, ‘Arithmetically impossible’! Pollster explains why the 2020 election is ‘deeply puzzling’ in fact, stat, and math-filled thread. Anders Hagstrom at Da Caller, Trump Says His Campaign Will Make New Legal Challenge In Wisconsin After Recount. Recounts aren't enough; recounting the same illegal and fictitious ballots doesn't help.

Dems celebrating preliminary Wisconsin recounts results that include hundreds of thousands of ballots that will soon be thrown out b/c they do not have a WRITTEN REQUEST for the ballot on record as required by Wisconsin law.

These unlawful ballots will he challenged this Tuesday 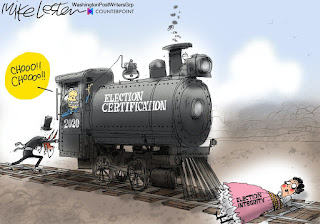 Patrick Basham at Da Spectator,  Reasons why the 2020 presidential election is deeply puzzling
"If only cranks find the tabulations strange, put me down as a crank" Sharyl Attkisson has What you've been asking for: A (fairly) complete list of (some of) the most significant claims of 2020 election miscounts, errors or fraud, most of which she could have gleaned from these posts since election day.At Breitbart, Newt Gingrich: 2020 Election May Be ‘Biggest Presidential Theft’ Since 1824. Election fraud is a long tradition in America.

“The more data comes out on vote anomalies that clearly are not legitimate the more it looks like 2020 may be the biggest Presidential theft since Adams and Clay robbed Andrew Jackson in 1824,” the former House speaker said in a Friday tweet:

An interesting update, sort of, on the story regarding a raid on servers in Germany that may be related to the election, from Andrea Widberg at AmThink,  New reports about election manipulation read like a Tom Clancy novel. If it going to help it needs to come out soon.

On Friday, a retired top Air Force intelligence analyst stated with certainty during an interview that special forces had secured a CIA-run facility in Germany that had computers showing election manipulation. If this report is real, we are witnessing the biggest coup attempt, sabotage, and treason in American history. No matter what, though, because this report is out there and comes from serious people, it deserves serious investigation.

I have no idea whether this raid happened. Its having taken place, however, is consistent with my ruminations about Trump’s peculiarly-timed shake-up at the Pentagon: Firing defense secretary Mark Esper and replace him with Christopher Miller, a special forces man; moving special forces into their own command, rather than having them function as subsets of other military branches; and firing potentially disloyal members of the civilian Defense Policy Board. These actions indicated that Trump was clearing the decks for something big.

In this post, I’ll sum up the most recent reports about events in Germany, although without taking any stand as to their veracity because I can’t take a stand. I don’t know enough.
. . .
For those of us sitting in our homes, it’s impossible to tell if we’re witnessing treason or fiction. We know only that the doddering Joe Biden who campaigned from his basement could never garner the most votes in American history.

A lawsuit was brought to prevent that, which the Judge agreed. One hour later in a very rare move, the Judge REVERSES his order.

This is destruction of evidence. This is CRIMINAL.

KC James at Heritage, The Federal Election Reform Commission Must No Longer Be Ignored, but it will be anyway.
At Town Hall, Kurt Schlichter warns Liberals Want You Demoralized, So Don’t Be. Revenge is a dish best served cold.

And finally, from Sundance's "new" CTH, (same address though), Sunday Talks: Extensive President Trump Interview With Maria Bartiromo.. (video, it's on Rumble, though, so I haven't figured out how to embed it). How long before they run her off TV Fox?
Plenty more at JJ Sefton's at Ace's, The Morning Report - 11/30/20.
Posted by Fritz at 9:58 AM