Election 2020: The Margin of Fraud

I think it's pretty clear by now that massive fraud and other chicanery (Margot Cleveland at Da Fed, Partisans Cheating By Ignoring Election Law Is A Problem As Big As Vote Fraud) has taken place in a few regions of the United States, (giving the pro-Biden media the excuse to claim it is not wide spread, Jonathan Turley Weighs in With Perfect Analogy of Why We Haven't Seen Systemic Election Fraud; YET), leaving us uncertain as to what the results would be without the ill deeds. As Smitty at the The Other McCain notes, Biden’s #DAMP Victory

Detroit, Atlanta, Milwaukee, and Philadelphia. DAMP. Damp AlFredo, IYKWIMAITYD. These four cities have some major ‘splaining to do. It’s Curious How Biden Underperformed Hillary Clinton In Every City…Except These Four lays out some of the gravity-defying numbers involved. Read the whole thing, in addition to the Patrick Basham piece it links.

The providential thing, beside having a POTUS who triumphantly treads titanium testicle territory on hand to deal with this mess, is that the legislatures of those four states are under GOP control. Tellingly, the selection of electors is a matter for the state legislatures only, as noted in this outstanding American Greatness post. The Electoral College was incorporated into the Constitution literally for this situation. Literally As [FLOWERBED]. LAF. It’s funny. 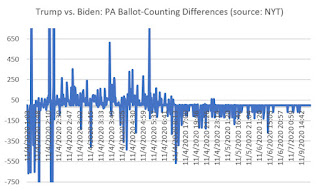 As just one example, here is a graph depicting the shifts in votes starting on election day. The X-axis is the date/time and the Y-axis represents the change in votes (positive values denote shifts for Trump, negative values represent shifts for Biden, in hundreds).

May I call your attention to the differences between the left and the right sides of the graph?

But statistical anomalies aren't going to cut it. Breitbart, Pennsylvania Secretary of State Won’t Order Recount. I wonder why. And Chris Buskirk has a historical reminder that fraud is not unheard of in Pennsylvania:

"Philadelphia's election system had collapsed under "a massive scheme" by Democrats to steal a State Senate election in November, a Federal judge today took the rare step of invalidating the vote & ordered the seat filled by the Republican"

Da Blaze, Georgia GOP chairman: Why did absentee ballot rejection rate drastically drop in 2020 when a million more of them were cast than in 2018? Paul Sperry at RCP, Pro-Biden Bug Also Suspected in Georgia's Vote-Counting Software


A curious thing happened as Fulton County, Ga., election officials counted mail-in ballots at Atlanta’s State Farm Arena in the days after the election. In the early hours of Nov. 5, a surge of some 20,000 mail-in votes suddenly appeared for Joe Biden, while approximately 1,000 votes for President Trump mysteriously disappeared from his own totals in the critical swing state, where Biden holds a razor-thin lead.

A poll watcher noticed the suspicious shift in votes while monitoring the interim election results on the Georgia secretary of state website.

“I concluded from looking at these results that this was an irregularity, since there was no obvious reason for President Trump’s totals to have decreased while former Vice President Biden’s totals increased dramatically,” Voter GA co-founder Garland Favorito swore in an affidavit he filed this week with the secretary of state’s office.

The lawsuit, filed by four voters in the U.S. District Court for the Western District of Michigan, seeks to toss out ballots in three Democratic strongholds — Wayne, Ingham, and Washtenaw counties — over allegations of voter fraud, according to Michigan Live.

Those three counties are responsible for about 1.2 million votes, favoring Biden by more than 2:1. Eliminating ballots from those counties would give Trump a victory in Michigan.

Plaintiffs claim that "sufficient evidence" exists "to place in doubt the November 3 presidential-election results" in the three identified counties, citing "issues with transparency, fraudulent changing of dates, a software glitch, clerical errors, illegal votes, and many other issues and irregularities."

A federal lawsuit filed by three voters in Wisconsin seeks to have hundreds of thousands of ballots thrown out in three counties, including in the state’s two largest counties, which are Democratic strongholds.

The lawsuit filed on Thursday in the U.S. District Court in Green Bay contends that the absentee voting process in Milwaukee County, Dane County (where Wisconsin’s capital of Madison is located), and Menominee County included “illegal votes” and thus must have their presidential election results invalidated. If the long-shot lawsuit succeeds, it would add the state’s 10 Electoral College votes to President Trump’s ledger.

Sara Carter, Giuliani alleges there is enough UNLAWFUL ballots to turn election in Trump’s favor. That may be true, but will it?  Brianna Kraemer at JTN, Steve Bannon predicts a 'dogfight' in the coming weeks as many election lawsuits head to the courts. That doesn't require some special insight. Bill Whittle is really pissed:

Daniel Greenfield at Front Page, The Law Is There’s No Presidential Transition Until Congress Certifies the Election

The United States only has one president at a time. Maintaining a fake shadow presidency undermines the sitting administration to the American people and to foreign governments.

It’s illegal and inappropriate. So the Democrats are doing it anyway.

Incoming presidents, since Truman’s day, receive briefings and, since Kennedy’s day, get funding for their transition teams, but, according to the law, only once it’s clear who won. The last time this happened, the Bush transition was blocked by Democrats until December.

Also,  If Media Didn't Think Trump Could Win, It Wouldn't be Targeting his Lawyers. Not necessarily true, they just hate anyone who helps Republicans. But it might explain the extra vitriol.

🚨🚨🚨 Breaking news folks! I have had some documents that were gifted to me from a journalist, and just got permission to burn everything down. Stay tuned!

The FBI refused to investigate previous electronic voter fraud for starts. And so much more!


The US Cybersecurity and Infrastructure Security Agency released a joint statement with other election security experts Thursday refuting claims that hackers interfered with vote tallies. The statement, joined by the National Association of Secretaries of State and the National Association of State Election Directors, came hours after a report from Reuters that CISA Director Christopher Krebs believes the White House is planning to fire him.

In the joint statement, election security officials called the 2020 US presidential election "the most secure in American history," adding, "there is no evidence that any voting system deleted or lost votes, changed votes, or was in any way compromised." The statement was released within hours of a tweet from US President Donald Trump that baselessly claimed ballot systems deleted votes cast for him. Elections experts and fact-checking groups have found the assertion to be false.

Good news or bad news from AllahPundit at Hot Air, Endgame For Trump’s Legal Strategy: Giuliani Now In Charge Of All Voter-Fraud Lawsuits. Rudy talks a good game but rarely delivers.
And my already busted irony and hypocrisy meters just exploded as Bad News From Schiff: Investigating An Incoming President-Elect Is A Degredation Of Democracy, Or Something (Capt. Ed at Hot Air).
Posted by Fritz at 10:08 AM