Newmax, Sidney Powell: Will Prove Case 'Within Next Two Weeks' in Court

Trump campaign attorney Sidney Powell Friday claimed her team will be able to prove, in court, all of their claims concerning the election "within the next two weeks," as "we have more than enough evidence now."

"We have more evidence now than the present population is imprisoned on," Powell told Fox Business' Maria Bartiromo, while laughing off a statement from Dominion Voting Systems denying the attorneys' claim that the company's software was used to pull votes away from President Donald Trump and give them to Democrat challenger Joe Biden, and that the company had ties to Venezuela.


Sundance, Unusual Pattern and Ratio Within Philadelphia Ballot Data Indicates Dominion Software Manipulation of Vote… Indications, alas, are not proof.  Also, Jordan Sekulow on New Election Lawsuits: “What’s Coming in Georgia Will Be Shocking”…
Trump Recount Committee staffer tells Newsmax the server raid was real and raw data showed different
John Solomon at JTN, In new twist, Georgia governor urges audit of ballot envelope signatures to look for fraud Capt. Ed at Hot Air, Trump: “Stay Tuned” For “Big” Voter Fraud Information In Georgia as Hundreds of Activists Gather for ‘Stop the Steal’ Rally in Georgia (Breitbart). ET, Loeffler Calls for Bipartisan Group to Examine Georgia Mail-in Ballots. Good, but probably not sufficient.
AllahPundit crows, Liz Cheney To Trump: If You Have Proof Of A Massive Election Conspiracy, We Need To See It Right Now. I think that's about right. I'm pretty sure the voting software has the innate capacity to cheat, I suspect Democrats (and some Republicans) know that. The question is whether they used those capabilities and whether evidence can be found to support that charge. But two weeks isn't that long.
Carrie Sheffield at JTN, FEC Chairman: Trump campaign bringing 'legitimate accusations' of election fraud to court

The Trump campaign is bringing "legitimate accusations" to court through affidavits of credible witnesses and other evidence used in its challenges to electoral outcomes in various states, Federal Election Commission Chairman Trey Trainor said.

Trainor said his review of evidence, including numerous affidavits claiming voter fraud and a sworn statement by a prominent mathematician flagging up to 100,000 Pennsylvania ballots, met the first level of legal scrutiny under what's known as motion to dismiss or "Rule 12(b)(6)" of the Federal Rules of Civil Procedure, which would dismiss less credible claims.

Da Beast, Team Trump Leaders, Including Campaign Manager Bill Stepien, Have No Faith in Rudy, I have no faith in Rudy, but I have a lot in the honesty of Sydney Powell.
NewsMax, Mich. Republicans, After Meeting Trump, Say No Information to Change Election Outcome. GOP Michigan Canvasser Speaks OUT After Feeling Threatened (YouTube). Breitbart, Trump Lawyers: Pennsylvania Lawsuit Dismissal Moves Us Closer to Supreme Court.  Hot Air, Breaking: PA Court Dismisses Giuliani Lawsuit With Prejudice, Reuters, Detroit asks judge to sanction Trump campaign for spreading 'disinformation'. Hot Air, Toomey Congratulates Biden, Says Trump Has Exhausted All Plausible Legal Options. For many Republicans, going back to being the minority would be a blessed relief from responsibility. 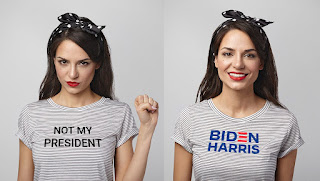 Matt Margolis at PJ Media, Whoa: Nearly a Third of Democrats Believe the Election Was Stolen From Trump. ET, Texas Voter Says Level of Fraud Denial Is ‘Almost Comical’, and the Babylon Bee hits close to the truth with Study Finds Connection Between Believing Russia Rigged 2016 Election And Believing 2020 Election Was Foolproof.

"It seems that people who screamed about Russia for 4 years now have a 100% chance of encouraging everyone to accept the 2020 election results without question," said study head Dr. Rupert Manning. "It's basically all the way across the board: if you believed that Vladimir Putin somehow hacked voting machines, purchased a bunch of memes, and raised an army of millions of Russian bots to disrupt the election and get Donald Trump elected, you certainly now believe that our elections are completely safe and secure."

Fox, CNN pundit says Trump’s rumored actions ‘out of bounds,’ but is reminded Dems did same in 2016 "'It’s so out of bounds that the same thing happened not 4 years ago,' Stephen L. Miller wrote". Sister Toldja at Red State, Adam Housley Schooled Brian Stelter on What Journalism Is and Isn't During Rudy Presser, and It Was Glorious

Brian rather than dismissing it, why not encourage reporters to investigate what he is presenting? He is an attorney and represents the President. If he's lying and evidence is not true, then rip him. Dismissing it outright from the beginning without looking at any of it is bias. https://t.co/IiAN9v934I

Man who personally pushed the horrifically damaging Russia collusion conspiracy theory for four years says that litigating a contested election is "playing with fire." Do they think people will forget what they did to the country for the last four years? https://t.co/gKKoDdtC9c

Jonah Goldberg is looking forward to going to all the good parties again, This Was Always the Plan
Posted by Fritz at 10:26 AM