If This Election Lasts More Than 4 Hours, See a Doctor 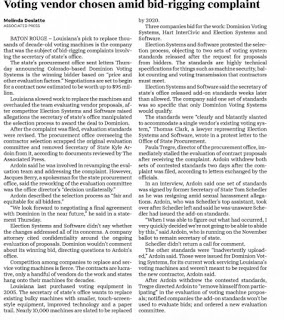 It's pretty clear by now that the SmartMatic/Dominion vote counting machines and election tabulating software used in more than half the states was designed by foreign malefactors with cheating in mind. The only real question is if the people who bought it and installed it were aware of these capabilities and used them to alter votes in the presidential election. From Sundance at CTH, Sidney Powell Outlines Affidavit Showing Purpose of SmartMatic Voting System to Control Elections…
Elamerican, Dominion, the Foreign Software Company with a Controversial Background Deciding American Elections. This US cable released by Wilikeaks is particularly chilling. The Manila Times, 2016, Never again! …to Smartmatic

John Oltman quoting Eric Coomer. Does anyone have the original quote by Coomer?? https://t.co/tMhCIdjTbP

3) What the agency failed to disclose, however, is that Dominion Voting Systems, along with Smartmatic, is a member of CISA’s Election Infrastructure Sector Coordinating Council - one of the two entities that authored the statement put out by CISA. 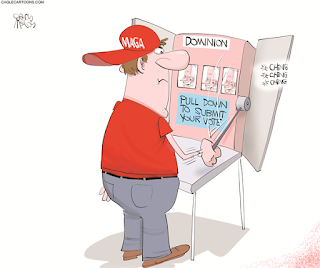 
The U.S. Army did not conduct a raid in Germany on either Sctyl or Dominion offices or servers. They are foreign nationals and we must operate in accordance with German law. Moreover, the U.S. Army does not have law enforcement powers with respect to such entities.

So what happened? I am reliably informed that a unit under the command of USEUCOM (i.e., United States European Command) did in fact conduct an operation to take control of computer servers. But these servers belong to the CIA, not Dominion or Sctyl. The U.S. military has full authority to do this because any CIA activity in the European theater is being conducted using military cover. In other words, CIA officers would be identified to the German government (and anyone else asking) as military employees or consultants.

Such an operation would have been carried out with U.S. law enforcement present to take custody of the evidence. That means that the evidence will be under the control of the Department of Justice through US Attorneys and can be used in court or other judicial proceedings.

This is not the first time that a military unit attached to EUCOM has compelled a CIA computer facility to hand over evidence. A dear friend of mine (a retired DEA officer) told me about an incident where he entered a CIA facility in Frankfurt backed up by the US Army to get info the CIA was withholding (this took place in the 1980s).

I also have confirmed what Jim Hoft reported the other night–the CIA’s Gina Haspel was not informed in advance of this operation. Based on this fact, I think it is correct that action was taken in Germany on territory under U.S. control and that a CIA facility was targeted.

I also have learned that FBI Director Christopher Wray was excluded from this operation. Wray, more than Haspel, has been working aggressively to undermine and sabotage Donald Trump. This means that some other U.S. law enforcement agency (e.g., US Marshals, DEA, Secret Service, etc) had the lead in collecting the evidence.

Sidney Powell is a serious lawyer. She is not going to make a false claim. Period. She embodies honesty and integrity. Given her recent statements on Maria Bartoromo and Lou Dobbs and Eric Bolling, she clearly knows that evidence is being collected that will prove beyond reasonable doubt (i.e., the type of evidence required to obtain a criminal conviction) that the CIA had some sort of nefarious relationship with Dominion Software and that Dominion Software was being used abroad and in the United States to conduct voter fraud.

I fully expect CIA officials to argue they had no idea that Dominion was engaged in such nefarious activity. Their denial carries as much weight as the claim by Captain Louis Renault in the iconic scene in Casablanca . . .

The Clark County Commission just threw out an election that represents almost 1/6 of the total votes cast in Clark County because there were too many “discrepancies” to be sure that that the results in that election can be certain. 153K votes in this election. https://t.co/kqO1cBwnYH

Debunked? Capt. Ed, Too Bad To Check: Did Nevada Really Throw Out An Election Over 153,000 Bad Ballots?
Some explanation from Carrie Sheffield at JTN, Recount vs. audit: Which is more precise? And could either change election outcome?

At this point, I don't think the courts, even SCOTUS, are going to overturn the election. I know that Sidney Powell says she's about the release "the kraken" and the amount of evidence the president's legal team has amassed is like getting it from a firehouse, but I don't think this matters, ultimately. No matter how big her kraken is, nor how voluminous is the output from her hose, the judges are simply not going to make any decision that is going to result in flipping any states that have already been called for Biden. Not even for a "do over" because there is no getting around the constitutional deadlines.

And I'd guess that Ms. Powell and Mrs. Giuliani know this already. That's why I don't think that some kind of last-ditch appeal to SCOTUS is their game plan. All of this evidence they're collecting is not for SCOTUS, it is for state legislatures.

Because "president-elect" Joe Biden is not yet "president-elect". And he will not be "president-elect" until each of the 50 states certify their electors. And that's where the kraken will really be released. Because the evidence that isn't good enough for the courts might be good enough to have an effect at the state level. I did not bookmark a link to this, but the Speaker of the (State) House in Pennsylvania, a Republican, stated that there would be no certification of Pennsylvania's electors without an audit, not just a recount, of that state's votes from the election. Also, two GOP lawmakers in Michigan are also demanding an audit before that state's electors are certified.

But this won't flip any states, either. I don't expect states to award electors to Trump. But what I think is going to happen is that the Trump legal team will make all of the evidences freely available to any state legislature which might want to have a look at it. Because Trump can argue that they really need to look at the evidence with an open mind before they make any decision.

I believe that the evidence will be enough to give some legislatures second thoughts, so that they simply will not certify any electors at all. If there are enough states that balk, "president elect" Biden's won't get the necessary 270 votes to win. Of course, neither will Trump, which is why the election will then be thrown to Congress.

In such a situation, the constitution requires the president to be chosen by the House and the Vice President by the Senate. In the House, each state gets a single vote. Currently, the congressional delegations are split something like 28-23 in favor of the GOP. Assuming the Georgia senate run-off elections favor the GOP, Mike Pence will be elected Vice President.

And great will be the wailing of the Democrats. They'll curse and and weep and gnash their teeth and shriek about stolen votes and fraud and cheating, and etc., and we'll just tell them "welcome to the party, pal."

But my point is, I think this is the path to victory is Donald Trump's best bet -- and the one that his legal team is angling for.