A couple times in the last few days I've obliquely referred to some health issues I've been having. So here's the story.

Since I had the cataract removed in my left eye about seven years ago, the vision in my right (dominant) eye has been getting steadily worse, as its own cataract continued to get thicker, more irregular and yellower. I began to look forward to the time when insurance would pay for the operation. Last year, my corrected vision in that eye was 20/40, the bare minimum for the operation, but by this year, it had further degenerated to 20/80, and I found the eye all but useless for reading, or anything else for that matter. So I easily let the eye doc sign me up for the replacement surgery. 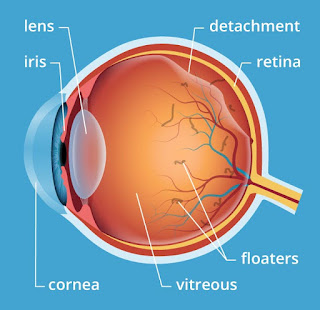 Last Monday I had no food after midnight, and showed up for surgery in Prince Frederick at 7:30 AM Tuesday as planned. Surgery went much like the last time (I don't remember a damn thing) and we got breakfast at IHop before noon, with my right eye all shielded and dilated. Sometime later in the day, however, the eye began to hurt, especially when I tried to focus both eyes on a near object, like my finger. I didn't remember that as a side effect from last time, and was a little concerned.

The next morning (Wednesday) I reported for the next day follow up as planned. They removed the patch, and tested my vision (still kind of off) but after peering deeply into the eyeball, the Doc admitted there was an issue. It seems that some vitreous body, the jelly like material from the back of the eye, behind the lens, had pushed into the anterior part of the eye, where it didn't belong, and that there was a trace of it along a line (wick) to the place where the instruments had gone into the eye, and he was concerned about the possibility of infection following that line into the eye. He admitted it happened on his watch, but really couldn't explain why it happened in this case and not most others. Hmmm.

He told me that he thought I need an almost immediate vitrectomy, the removal of the eyeball jelly (vitreous humor) to prevent any infection, and arranged an immediate consultation with a local retinal surgeon. Fortunately, we passed on lunch and went straight to the retinal surgeon.

The retinal surgeon, a young Chinese American (he looked about 12 but was probably 30), examined it, and while he wasn't in agreement that it needed to be done immediately, my observation on the pain tipped the balance. He concluded that the eye pain was due to vitreous humor pushing on the iris when attempting close focus. He made a few calls and arranged an operating room and anesthesiologist at Anne Arundel Medical Center up in Annapolis at 6:00 PM (still Wednesday).

They checked me in, did the usual interrogations, and the surgeon came in with a Sharpie over my right eye to mark it as the correct eye, explaining the hospital wouldn't let him operate without it. This will be important later, trust me.

The vitrectomy was much different than the cataract operation. Much longer, about an hour, and during the end of it, as they warned me in advance, they woke me up most of the way, although I was still pumped full of "don't give a shit".  The Dr consulted with me a little on a slight problem. It seems the lens capsule was somewhat ripped, and he worried that the lens might "fall out" someday. He could have anchored it to something (iris, I think) but he was concerned that if he damaged it, he would not have a replacement available immediately. So he decided (and I more or less agreed, in my "don't give a shit" state, and am still OK with it) to go ahead without anchoring it further. It was odd being awake, with the eye numbed, several instruments stuck in it and wiggling around. But it ended soon, and I was back in recovery in short while, eye shielded again, and was discharged shortly thereafter, wheeled to the car, and back home by 9 PM.

But when did the lens capsule get ripped? Got questions for the cataract doc.

At the followup the next morning (Thursday), they took off the shield, tested the vision (not good, but not surprising). Interestingly, my two eyes disagreed where the world was, the fixed one thinking it was down and right several degrees. But the doctor explained that's because the muscles working the eye were still partially numb, and not responding, so I felt better. It all checked out, and my instructions were (and are) to not wash it or touch it, use antibiotic and steroid eye drops 4X daily and wear the shield at night. There was still a lot of "trash" in my vision, but the doc explained that he had put in a suspension of steroid to reduce inflammation, and that was what I was seeing. Not much in the way of pain, although the eyeball was (and still is) incredibly sensitive to touch.

Things were much the same that day, no real change until late in the evening when Georgia got to thinking that the black mark on my forehead was diminishing my natural rugged beauty, and suggested getting rid of it with a cotton ball soaked in rubbing alcohol. It leaked into the eye, and burned the shit out of it. We rinsed it with sterile water and got the eye drops back into it. The next AM it was really cloudy, and irritated, and we sought another appointment with the retina guy.

He was was very patient, and explained that alcohol is used to remove the outer corneal layer prior to Lasik surgery, and that it would regenerate. He rinsed it more, even though it was hours old.  He also looked around and reassured us that his work was still intact, and recovering as expected. By now, the world was closer to agreement, but not yet perfect.

Over the course of the next three days it has continued to improve. Curiously, it seems cloudier when I get up in the morning, and gradually clears over the day. Last night, watching the Eagles-Vikings game, I could read small print on the TV almost as well with my new eye as the old one. I can see stars, at least the brighter ones, with the "new" eye.

Both eyes have implant lenses set for distance vision; I will still need glasses for reading and to correct slight astigmatisms in both eyes. At this point my distance vision, even without glasses, is pretty good at least later in the day. Reading is more difficult. My current prescription has a heavy correction for the cataract, and no longer works well in the fixed eye. My left eye (the one fixed 7 years ago) is full of ugly floaters, and while it is functionally 20/20, that's only when the floaters decide to float out of the way. Rarely. It's very frustrating.

It will be at least 6 weeks after cataract surgery before it's worth getting a new prescription, and eye glasses made for the eye, it takes time for the eye to settle down. I don't know how much longer  the vitrectomy will add, if any. I may go to Wally World and look for an acceptable set of cheap "anti-reading" glasses, a correction that will allow both eyes to focus reasonably well at arms length just to get by.

My next followup with the retinal guy is Wedesday morning. I'm not anticipating any more bad news, but I'm keeping my fingers crossed. Not my eyes. That hurts.
Posted by Fritz at 4:56 PM

Email ThisBlogThis!Share to TwitterShare to FacebookShare to Pinterest
Labels: eyes, health, Me