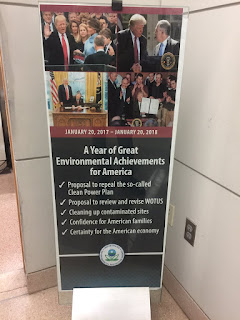 Obama Holdovers At EPA Object To “Propaganda Posters” In Office

Scott Pruitt may be in charge of the EPA, but you can rest assured that among the rank and file staffers there are a bunch of folks from old Obama era gang who are still hanging around. Needless to say, they’re not exactly thrilled with the direction the Trump administration has taken in terms of rolling back costly and oppressive regulations to focus on projects which actually produce results. So when the management started putting up a few promotional posters reinforcing the ongoing work and their successes to date, not everyone was happy.

What do you do when you’ve seen something relating to current policy which upsets you? Why, you leak it out to somebody at the New York Times immediately, of course:


The Environmental Protection Agency wants its employees to know it is proud of all they accomplished in 2017, even if that amounted to undoing the work they did in 2016.
In an array of posters displayed at EPA offices across the country, the agency is applauding “a year of great environmental achievements for America.” The posters include among notable accomplishments the preliminary repeal of the Obama administration’s Clean Power Plan and walking back the Waters of the United States rulemaking. In a display listing its “New Environmental Achievements,” EPA notes it provided “confidence for American families” and “certainty for American businesses.”
The agency also boasted that its Superfund taskforce is “encouraging private investment” while expediting cleanup and land reuse.

It was John O’Grady, the president of the government workers union representing many EPA workers (the AFGE), who called the posters “propaganda” according to the article.

Hopefully it was undoing more than just what they did in 2016.

It's not like propaganda is foreign to the EPA. They have always steered pretty close to the line of illegally lobbying for their agenda. I would argue they have overstepped it many times, but they rarely get called on it. Calling attention to your own accomplishments in the office (even if the NYT fails to agree) doesn't even come close to the line.

Sauce for the goose.
Posted by Fritz at 7:55 PM