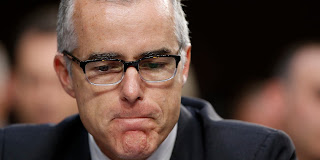 It's starting to look like FBI Deputy Director Andrew (Andy) McCabe got eased out over his failure to follow up on the finding of Hillary's classified emails on Anthony Weiner's laptop: Internal Justice Department probe eyes McCabe’s role in final weeks of 2016 election


The Justice Department’s inspector general has been focused for months on why Andrew McCabe, as the No. 2 official at the FBI, appeared not to act for about three weeks on a request to examine a batch of Hillary Clinton-related emails found in the latter stages of the 2016 election campaign, according to people familiar with the matter.

The inspector general, Michael E. Horowitz, has been asking witnesses why FBI leadership seemed unwilling to move forward on the examination of emails found on the laptop of former congressman Anthony Weiner (D-N.Y.) until late October — about three weeks after first being alerted to the issue, according to these people, who spoke on the condition of anonymity to discuss the sensitive matter.

A key question of the internal investigation is whether McCabe or anyone else at the FBI wanted to avoid taking action on the laptop findings until after the Nov. 8 election, these people said. It is unclear whether the inspector general has reached any conclusions on that point. 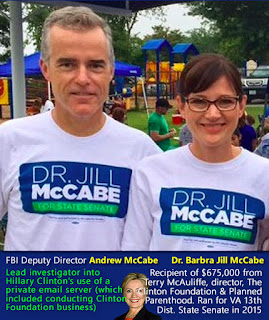 
Whatever logjam formed in McCabe’s office finally broke after the Wall Street Journal reported, on Oct. 24, 3016, that McCabe’s wife had received substantial donations from Clinton-ally Terry McAuliffe, the Governor of Virginia. It was less than a week later that Director Comey decided to inform Congress that the FBI was looking into the emails on Weiner’s laptop. Clinton supporters (and Clinton herself) have long blamed that announcement for costing her the 2016 election. But the Post story says there was more than one Clinton investigation which stalled in McCabe’s office:


At the same time, the FBI was facing a new set of questions, this time about McCabe’s role in a stalled probe into the Clinton Foundation. Some within the FBI felt McCabe had repeatedly moved to hamstring that probe and were suspicious of his motives for doing so, according to people familiar with the matter.
McCabe’s defenders inside federal law enforcement have repeatedly said he tried to navigate a sensitive political investigation between Justice Department officials who thought the probe was going nowhere and FBI agents who believed they were being blocked from issuing subpoenas and taking other steps that could uncover critical evidence.

It’s interesting that unnamed DOJ officials thought the investigation was going nowhere. Is that a possible reference to Loretta Lynch who also told Director Comey to downplay the FBI’s investigation into Hillary’s email server by calling it “a matter”? It begins to appear as if the DOJ was acting as a drag on more than one Clinton investigation. More importantly, it seems as if McCabe himself was responsible for slow-walking these investigations.

And this amusing speculation:


You have to wonder if, by delaying this for several weeks, McCabe actually made the impact of Comey’s announcement worse. If the same thing had come out sooner, there would have been more time for Team Clinton to recover.

This IG report is going to be a blast.

Linked by Evi L. Bloggerlady in "Blondie SOTU: Dreaming and Atomic", "Natalie Wood", "Margot Robbie: I, Tonya", "Julie Ertz", "Marissa Van Noy", "BREAKING: Andrew McCabe out at FBI" and "I, Tonya: A Review".
Posted by Fritz at 8:02 AM