An unintentionally hysterically funny article in the Washington Post this morning, detailing some of the results of the Schumer Schutdown: While Yellowstone’s staff was furloughed, a snowmobiler got way too close to Old Faithful. Some of the findings: 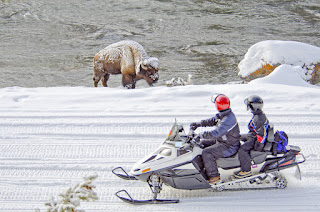 Tourists on a commercial snowmobile broke park rules by driving too close to Yellowstone National Park’s iconic Old Faithful geyser Sunday, park officials confirmed, at a time when most staff was furloughed during the partial government shutdown.

In an interview Monday, park superintendent Dan Wenk said one of the concession operators who is authorized to conduct snowmobile tours through Yellowstone — and was allowed to continue doing so even as most park employees stopped work this weekend — violated park rules.

“This guide told two of his clients that they could drive around the visitor center and into an area where the snowmobiles are prohibited,” Wenk said, adding staffers spotted the activity on the park’s webcam and issued a citation to the guide, who now faces a mandatory court appearance. 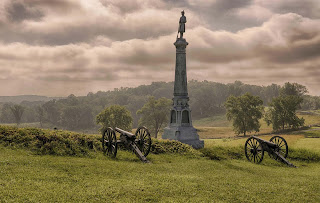 Oh my gosh! Snowmobile tracks in the snow near Old Faithful! They could last until spring, or the the next snow, which ever comes first!


At Pennsylvania’s Gettysburg National Military Park, a family with metal detectors and a drone — both of which are prohibited — entered the park over the weekend. Rangers intercepted them and used it as “an educational opportunity,” said NPS spokesman Jeremy Barnum in a phone interview, and let them go without a citation. They did not damage the park’s resources, Barnum added.

A drone and a metal detector! Maybe they would have found a lost quarter, or even a spent Minni Ball! 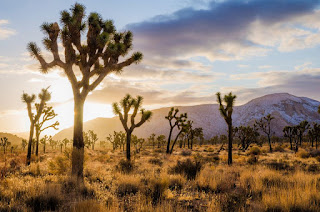 Shane Farnor, an online advocacy manager for the National Parks Conservation Association (NPCA), said in an interview that during a weekend visit to California’s Joshua Tree National Park, he saw dogs roaming without leashes, which is not allowed, and running on trails where they are not allowed.

But then, maybe they were just coyotes, which look a lot like dogs without leashes.

My point is that minor violations of park rules happens all the time, probably thousands of times in the average day. I may have even stepped off the boardwalk myself one day while visiting Yellowstone.To make such a big deal out of relatively trivial offenses as a consequence of the shutdown is evidence of how badly they want to show the Schutdown as a dangerous folly.
Posted by Fritz at 9:21 AM