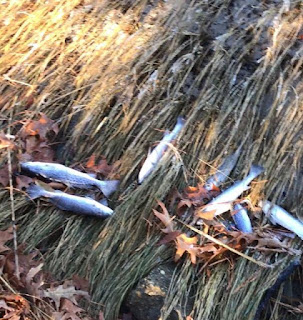 Fish in the Bay are being killed by it: Trout are getting stunned by the cold and washing up dead across Hampton Roads


The area’s legion of speckled trout anglers are in mourning.

Hundreds, probably more like thousands, of dying or dead trout are littering waterways and shorelines in Little Creek, Lynnhaven and Rudee inlets, along with some locations on the Eastern Shore and the sounds of North Carolina. Small black drum also have been found.


Cold stun is the culprit.

A form of hypothermia, cold stun happens when water temperatures drop drastically and quickly after events like Thursday’s blizzard. Fish go into shock, much like cold people do, then float upside down on the surface. They struggle to breathe, and since they can’t swim or work their gills properly, they drown. 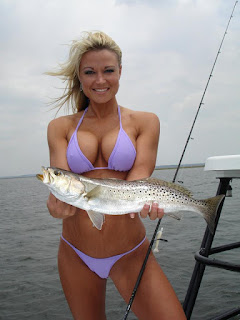 Even more so after one of the best speckled trout seasons in recent years.

“To catch one citation (award-winning) trout a year in Lynnhaven is a pretty big deal,” said Mike Firestone, who has lived on the inlet for 14 years and fished its waters since he was a boy. “I had five this year and released a lot more that would have been. It’s just been a great year.

Unfortunately, this is pretty common. I've reported on it before. Our specks go somewhere in winter, at least most of them, probably south where the water tends to stay warmer. A few, though, seem to find the warm water outflow at "Location X" and hang around in the water that is artificially heated to up to 10 F above the ambient cold as hell. Sometimes we even catch one.  Hopefully a lot of them discovered it this year. Signs are good.

Wombat-socho has "Late Night With Rule 5 Sunday: Stacey Dash" ready for your browsing pleasure at The Other McCain.
Posted by Fritz at 5:03 PM