New data from state geologists show that an earthquake fault runs below Rodeo Drive and Beverly Hills’ shopping district, heightening the known seismic risk in an area famous for Cartier, Gucci, Prada and other luxury brands.

The new map is a change from a draft version released last year that showed the fault zone ending on the western edge of Beverly Hills, near the corner of Wilshire and Santa Monica boulevards. Based on more information, the state now says the fault zone extends a mile farther northeast, through Beverly Hills’ central district and into the city’s civic center area. 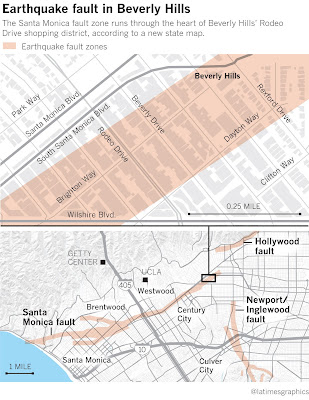 The Santa Monica is one of several faults running through highly populated areas of Southern California to generate interest and concern from seismic experts and government officials. The fault zone cuts through the heart of the Westside, straddling or paralleling Santa Monica Boulevard through Century City and Westwood before veering due west, with segments running into Brentwood, Santa Monica and Pacific Palisades.

It’s capable of producing a magnitude 7 earthquake. Experts believe the most recent major earthquake on the Santa Monica fault occurred 1,000 to 3,000 years ago.

I grew up in the West Side, Culver City for 12 years, and then the next several in Rancho Park, not far from the junction of the 405 with the Santa Monica Freeway. I only recall one earthquake, a mild 5 or so, while I was growing up (although I apparently slept through a larger one as an infant).

A magnitude 7 quake would devastate the area.
Posted by Fritz at 8:07 PM

Email ThisBlogThis!Share to TwitterShare to FacebookShare to Pinterest
Labels: California, earthquake, Me