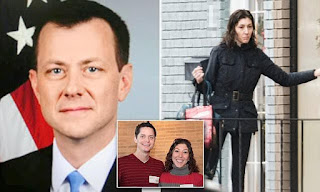 Byron York clears up some of the fog surrounding the texts between Superdooper FBI agent Peter Strzok, and his DOJ sugar honey attorney Lisa Page, and clears up some misunderstandings: Justice Department withholds majority of FBI texts

The answers are complicated, but here is what I have been able to figure out from conversations with the Justice Department and Capitol Hill investigators.

The Justice Department has identified about 50,000 Strzok-Page texts. But that is apart from the texts between Dec. 14, 2016 and May 17, 2017 that were declared missing a week ago but are now being recovered. So, the total is apparently 50,000 plus the currently unknown number of formerly missing texts.

So the 50k number I used two days ago was not across the 5 month gap, but all texts before and after, so we can't do the simple math and conclude that they were texting each other every 6 minutes. But still, that's a lot of texting.


But that number refers only to the Strzok-Page texts that were sent and received on FBI-issued Samsung phones. There are a number of instances in the texts in which the two officials say that they should switch the conversation to iMessage, suggesting they continued to talk about FBI matters on personal Apple phones. For investigators, those are particularly intriguing texts – what was so sensitive that they couldn't discuss on their work phones? – but the number of those texts is unknown. And of course, they have not been turned over to Congress.

So, that, deliberately  switching to an unarchived media for work conversations, is clearly in violation of government policy regarding document and data retention, and doing so deliberately to avoid discovery could be reasonably construed as obstruction of justice.When wouking for the Smithsonian, one of the things drilled into us in our annual IT training was not to use personal accounts for work business.


How many texts have been turned over? Both Justice Department and Capitol Hill sources say the total number is in the 7,000 range, which includes all the texts handed over on two separate occasions.

How many texts will be turned over? First, it's not possible to know how many texts from the Dec. 14, 2016 to May 17, 2017 time period will be recovered and turned over. But of the 50,000 the Justice Department already has in hand, officials say they have already turned over all they're going to give to Congress.

So, of 50,000 texts, about 43,000 were personal, or concerned details so secret (probably about the Russian meddling or Clinton email scandal investigations) that they can't be revealed even to Congress? Given that they were lovers, hiding an extramrital office romance, probably the majority are personal.

That's a lot of work time devoted to their love life. Using government devices for personal business is also against the rule and probably illegal, although it is a common indiscretion, and not widely enforced. At a minimum, the pair should be held accountable for the abuse of government phones, and waste of government time, and the cost of the resulting investigations. That would be a big bill.

It also seems to me that for the FBI Chief of the Counterespionage Section, having an unknown extramarital affair put Peter Strzok at considerable risk for blackmail by foreign intelligence services. Why hasn't this guy been canned instead of merely "laterally arabesqued" off to Human Resources?

This is gonna make a great movie if they do it fairly.