I Can See Clearly Now...

After Alex's wedding, I bit the bullet, and decided to go ahead with some deferred maintenance.  I went to my local eye doc, and scheduled the cataract surgery for my left eye.  Throughout my youth I had always prided myself on having good eyes, in fact, a few measurements came in around 20-10.  Ah, but then I grew older; sometime after 40 years old I noticed my eyes were not quite acute as they had been.  I went to see an eye doc, and she basically told me to come back when my arms got too short.  I passed that milestone (or is it millstone?) around 50, first adopting cheap reading glasses, and then in the past five or so years, getting progressive lenses that allowed me to see clearly anywhere from quite close to distances.  They took a while to get used to, but it was a pretty workable solution.  Always, my left eye seemed to be the more troublesome.
However, in the past couple years, the left has gotten really bad, to the point that its natural focus distance (to the extent that it focused at all) was about 6 inches from my nose, and even then, the image was not very clear.  At night, any bright light would be split into a wide spider web of light that was quite annoying (I could still see clearly with the right, so it was not a significant hazard)

I went in to see if perhaps laser surgery could be used to correct it and remember quite clearly saying "I regret to tell you you're not a candidate for laser, but you have a cataract and we can fix that."

That was late last year, and I put it off for any number of reasons, including: 1) The wedding, and the associated nonsense, 2) the fact that my right eye was (and is) still excellent at distance and 3) who wants to get surgery anyway?

But after the wedding a 6 month checkup came due, and I told the Doc I was ready to have it done.  The operations was done on Tuesday morning.

I won't detail the operation; I don't remember anything. I got a shot, lost track of events on the way to the operating room, and came to 30 or so minutes later back in the prep area, with Georgia there.  There was very little pain.  After a greeting and some instructions from the doc and nurses, I was on my feet, and walking out in another half hour to go home and rest.

You can find a YouTube of the procedure here.  If you're not too squeamish, it's pretty interesting.

I had been told be several people, including my parents, to expect the world to be a lot bluer in that eye.  I discounted that because I thought the cataract in my eye had mostly been a disfigured lump, and not really cloudy.  I was shocked at how blue everything was.  Anything white had a distinctly bluish and even purplish cast.

Interestingly, cataract surgery may have played a significant role in art.  Claude Monet was diagnosed with cataracts in his 70s, well after much of his work.  He had cataract surgery at age 83 in 1923,  here are two waterlily paintings: one before the surgery (finished in 1922): 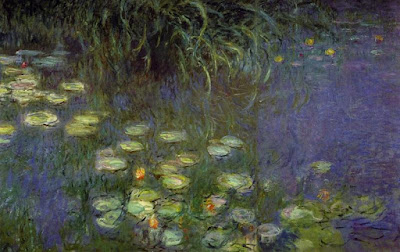 Some have argued that the increasing cataract later in life led him to use muddier colors, until after his cataracts were removed:


According to Professor Michael Marmor, the artist's failing sight was a source of frustration to him in the early decades of the 20th century. "He wrote letters to friends, [complaining] how colours were getting dull, and it was hard to tell them apart, and how he had to label tubes of paint," Professor Marmor said. "He was very vocal about how his failing eyesight was affecting him."

Monet's cataracts caused the lens of his eye to become denser and more yellowish. One immediate effect was to blur colours and reduce their intensity. "It was getting harder for him to see," Professor Marmor said. "[His eyesight] was getting blurrier, but he was probably more bothered by the progressive loss of colour vision."

The academic has illustrated how Monet's worldview changed by altering a photograph of his 1899 painting of the ornamental Japanese bridge in his garden. The adjusted photo shows that as the artist's sight got worse, so the bright, floral shades of pink and blue disappeared, leaving muddier browns, reds and yellows. The study, published in the Archives of Ophthalmology, argues that two later paintings of the bridge with strong red-orange and green-blue tones would have appeared almost identical to him.

Monet eventually had surgery in 1923 - just three years before his death from lung cancer at the age of 86. But afterwards he complained incessantly that his sight was first too yellow and then too blue. He destroyed much of the work he completed while suffering cataracts and the few pieces that survive were rescued by family or friends. When Monet eventually went back to painting, he completed the lily series that now hangs in the Orangerie.

Truth?  I don't know, but as I said, I was shocked at how much the world changed in a few minutes.  You know that age old question - do we all see the same color blue?  I know the answer.  No.  Right now, my two eyes don't even agree on what blue is.  The effect is fading, but still apparent if I switch eyes.

So how is it all progressing?  I had my one day check up yesterday morning, and the doc assured me everything was going as planned.  The cloudiness was starting to fade, and the eye itched a bit (a good sign it's healing according to the doc).  My binocular vision seems better than it had been.  Driving seems somehow more "3D" than it had a few days ago.  Maybe the brain just wasn't getting enough useful information, and now with the left eye effectively a long distance focus (but still slightly out of focus) it does.

Another check up in a couple weeks, and a final one at six weeks, time to get new glasses prescriptions for both eyes, and presumably get a new set of progressive lenses or two.  According to the doc, the second eye will come in time, but I have another 3-5 years before that one is worth doing.

Email ThisBlogThis!Share to TwitterShare to FacebookShare to Pinterest
Labels: health, Me