I Don't Think They Understand What 'Occupy' Means 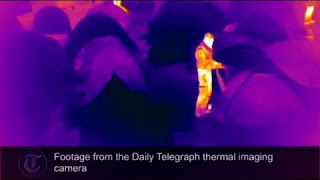 Only one in 10 protesters stay overnight at "Occupy London"

The camp forced St Paul's to close for the first time since the Blitz and is costing local businesses thousands of pounds a day. But most of the protesters are heading home to sleep in their own beds at night.

Infra red images taken by a police helicopter during the early hours show that only around 20 of the 200 tents on the encampment actually have people staying in them.

The Daily Telegraph has shot its own video of the St Paul's camp using thermal imaging equipment which appears to confirm these claims. The protesters are aware of the vacancies and allocate empty tents to newcomers and anyone staying for the day.

They should run through the camp at 3:00 AM and check each tent, and pick up the empty ones.  OK, really, they should just throw them out, but calling their bluff in the early morning would be kind of cute.  Then, being good capitalist stooges, they could "sell" the unclaimed tents to the highest bidder...

Seen at Watts Up With That.
Posted by Fritz at 4:58 PM

Email ThisBlogThis!Share to TwitterShare to FacebookShare to Pinterest
Labels: #Occupy