Did Dogs and Humans Co-Evolve? 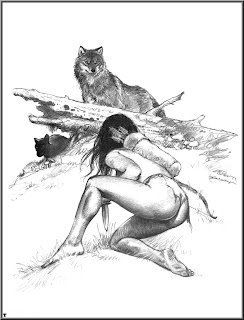 An interesting interview with Mark Derr in Salon where he expounds on his theory that humans and dogs evolved in tandem, and that the partnership started when modern man and the wolf first met.  A snippet:


It’s clear that many theories about early dogwolves are difficult to prove one way or another — largely because of a lack of concrete evidence. (Even DNA evidence does not always clarify matters.) Do you think the picture will become any clearer as research techniques become more sophisticated?

DNA sometimes seems to muddy things up, doesn’t it? There’s a lot of stuff with the DNA that I think will become clearer. I’m not expert in that, but I talk a lot to [Robert K.] Wayne, who is kind of the leading person in this field, and to other people.

Regarding the DNA evidence, let me say two things. My first dog book came out in 1997, and right after that, Bob Wayne and his group published a date for the origin of the dog that was at the far end — 135,000 years ago. The archaeologists had a hissy fit. A lot of other so-called experts also had hissy fits, and said this couldn’t possibly be true. The curious thing about that date is that despite all kinds of other evidence … Bob himself has never backed off from that 135,000 year date. I saw him just in February, at a symposium where I was talking on this subject, and I asked him point-blank if he’d ever backed off that date; he said no. He hasn’t put it forward with great regularity, because it’s a little out there — but what it shows is that basically as soon as Homo sapiens, anatomically modern humans, began to encounter wolves, you probably have this dogwolf appearing.

That’s one curiosity. The other thing is, a lot of the early DNA work was based on mitochondrial DNA, and it’s based on a lot of assumptions which are not necessarily true. There’s work coming out now that shows that the way that the mitochondrial clock is [interpreted] may not be accurate. … That’s why I say basically the dog was kind of invented on the fly. Wolves and people met on the trail, and they just have been walking ever since, is the way I put it. 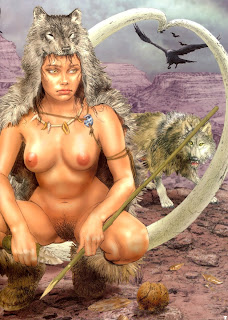 That sounds about right to me.  People haven't changed so much since modern human evolved that wolves and people would stay apart for thousands of years before eventually finding their mutual interests lay together.  Wolves would be sniffing around camps since the beginning of time, and as soon as people developed the habit of stealing baby animals for pets, the partnership would begin.  It would take thousands more years for "dogwolves" to evolve the characteristics that distinguish modern dogs and wolves.

And having "dogwolves" as partners could strongly influence the subsequent development and success of mankind.  Partners in the hunt, and guardians in the camp could have made the difference between failure and survival in the early stages of modern man's evolution, and explain how our branch of the hominid tree came to be the sole surviving line.
Posted by Fritz at 2:28 PM