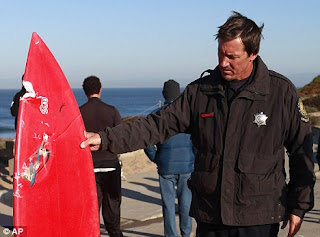 
A shark attacked a surfer off a California beach on Saturday, biting him in the neck and arm and sending him to a hospital with non-life-threatening injuries. Eric Tarantino, of Monterey, was attacked around 7am, just minutes after he and a friend entered the water at Marina State Beach, The Monterey Herald reported.

The shark bit Tarantino, 27, on the neck and right forearm and left teeth marks in his red surfboard. Tarantino's friend, Brandon McKibben of Salinas, helped him out of the water, and other surfers used beach towels to try to stop his bleeding.

Tarantino was taken to a local airport by paramedics and flown to the San Jose Regional Medical Center, authorities said.

This happens fairly often as Great White Shark attacks go (which is actually pretty rare).  A shark, thinking the outline of the surfboard and surfer from below looked enough like it's preferred food (a sea lion, likely) took a trial bite, decided the surfboard and/or surfer wasn't what it wanted to eat, and left.  If it had been intent of eating the surfer, it would have come back for a second pass.  He's still damn lucky to be alive.
Posted by Fritz at 5:00 AM