Why do Canadians shun greatness?

How do you motivate a lucky country to do anything of global import and consequence? That seems to have been one of the biting lines of inquiry — at least in respect of Canadian performance in world affairs — coming out of a recent conference at the Montreal Institute for Genocide and Human Rights Studies to mark the 10th anniversary of the formal genesis of the Responsibility to Protect doctrine, which states that countries ought to have legal obligations to intervene abroad to protect innocent civilians from genocide and crimes against humanity.

Indeed, hockey is the only domain at all in which Canada consistently requires unconditional and unapologetic superiority by Canadians at the highest levels of international competition. In most other domains of professional life — from sports to business, science, the arts and, to be sure, international affairs — a still extant colonial geist, supplemented by an exceptionally generous (to Canada) 20th century, have left us largely self-content in a collective stupor of mediocrity, if not outright apathy. Canadian citizens certainly experience their share of private tragedy, but have, in recent history, endured relatively few public tragedies. This has left us hard-pressed to see the urgency of being first-in-class to broker a major peace, fight a major war, stop a foreign genocide, troubleshoot an international disaster, transform the condition of an impoverished or oppressed land, create transformational companies or indeed win a gold medal of any variety.

The author goes on to presuppose that a weakened US will not have the will, the military might or the funds to continue to cover Canada in it's security umbrella, and further supposes that global warming, the all purpose excuse (is there anything it can't cause?) will make Canada more vulnerable to invasion.  But I know that Canada will never be invaded. And here's why: 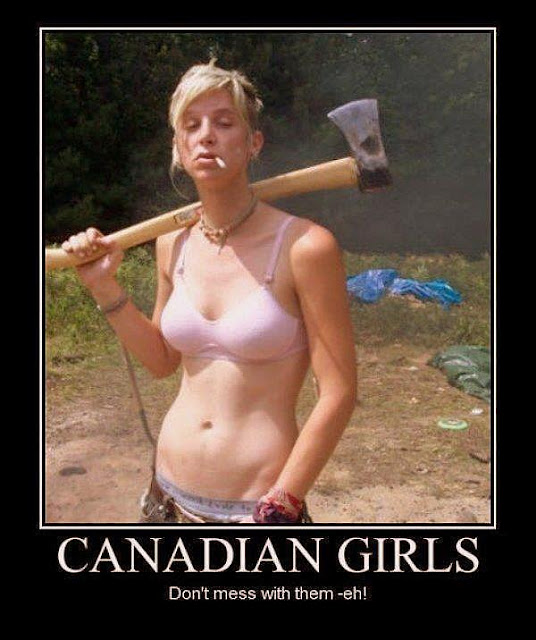 My effusive thanks to The One and Only Wombat over at the The Other McCain, who acknowledged all my Rule 5 ramblings from last week in his weekly canonical Rule 5 compilation.
Posted by Fritz at 10:05 PM