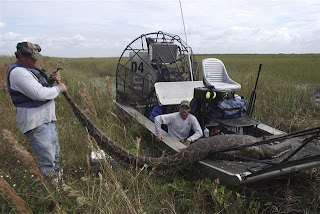 16-foot python found in Florida had eaten a deer


Officials in the Florida Everglades have captured and killed a 16-foot-long Burmese python that had just eaten an adult deer.

Scott Hardin, exotic species coordinator for the Florida Fish and Wildlife Commission, said workers found the snake on Thursday. The reptile was one of the largest ever found in South Florida.

Hardin said the python had recently consumed a 76-pound female deer that had died. He said it was an important capture to help stop the spread of pythons further north.

"Deer that had died"? I think that means it died when the snake ate it.  Any question whether it would eat a child if it found one?
Posted by Fritz at 6:00 AM