...is back in the news. A few months ago, I did several posts (1, 2, 3, 4) on the scandals facing Silvio Berlusconi, the Prime Minister of Italy, largely having to do with his amazing satyriasis, involving such things as underage women, call girls and "escorts".  At the time it seemed almost inevitable that, between the scandals, and the fact that Italy's economy is in a near ruin (it is the first "I" in PIIGS, Portugal, Italy, Ireland, Greece and Spain), that the days of his rule were nearly at an end!

Well, apparently the folk of Italy like having a dirty old man as PM, regardless of the economic state.  Italy has been pretty poor for a long time, maybe having a colorful leader is more important.  On October 14, Silvio survived a vote of no confidence. 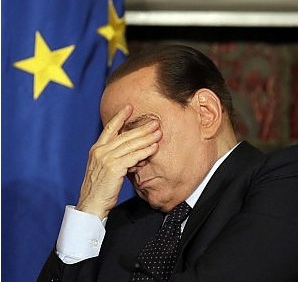 Italian Prime Minister Silvio Berlusconi has won a key confidence vote in parliament, sparked by questions over his handling of the economy and personal scandals.

Mr Berlusconi won the vote in the lower house by 316 vote to 301. Italy's government credit rating was recently downgraded and parliament failed to back a key part of the budget this week, triggering the vote. Mr Berlusconi also faces trial on sex, bribery and abuse of power charges.


Tens of thousands of peaceful protesters were joining a global "day of rage" against the elites blamed for economic downturn on Saturday when the rampaging violence, some of the worst seen in the Italian capital for years, erupted.

Ignazio La Russa, defense minister in Berlusconi's center-right government, suggested the violence was at least in part attributable to a polemical political tone he said was employed by the left and whereby "everything is justifiable as long as we get rid of Berlusconi, the 'evil of Italy'".

La Russa, an unflagging supporter of Berlusconi, said those who use violence "take advantage of these kinds of positions".

Back in Sept, wiretaps revealed something about Silvio's taste in women:


Wiretapped telephone conversations between Silvio Berlusconi and a businessman charged with recruiting female escorts for his allegedly sex-fuelled parties were made public Saturday, providing the most vivid picture of the prime minister’s debauchery and raising fresh suspicions that he just might be the most hedonistic ruler in the region since Caligula.
...
Berlusconi, who is 5 feet 5 inches tall, is heard asking Tarantini "not to bring tall [girls], as we are not tall."

OK, so what's so wrong with that? You don't really want a girl towering over you, do you?  Afterall we are a sexually dimorphic species (thank goodness), and it's natural for men to be taller than women.


Then he commented on the number of women:


In another call, he boasts to "having been with eight [girls] in one night, even though I could have had eleven."

At one point, he reveals that there are 40 women staying in his house who just won't leave. In many others, he asks excitedly who the businessman will bring him next.

Eight?  I throw the bullshit flag! It couldn't have been more than six!

In early October, Silvio decided that they should change the name of his ruling "People of Freedom" party, because it was getting stale:

"We will change the name of the People of Freedom because people no longer carry it in their hearts," the 75-year-old told lawmakers from his ruling coalition in parliament, Italian news media reported.

"We will examine any suggestions," he added.

Berlusconi then reportedly joked: "I'm told the name that would have the biggest success is 'Go Pussy!'"

The billionaire tycoon first entered the political arena in the early 1990s with a party called "Go Italy!" - a popular football chant.

"I have to say Berlusconi's latest quip wasn't bad," said Antonio Borghesi, a parliamentarian from the Italy of Values opposition party.

But wait. In early October, American actor George Clooney revealed that Silvio had invited him up to his bedroom! And he went!  Uh, where did I put my brain bleach?


George Clooney has denied attending one of Silvio Berlusconi's 'bunga bunga' sex parties but claims the Italian leader did show him his double bed.

Speaking for the first time about the incident the actor said he had gone to meet Mr Berlusconi in Rome to discuss the possibility of Italy providing helicopters for the relief effort in Sudan.

But he told the Time magazine website the Italian Prime Minister seemed far more interested in socialising and begged him to stick around for a party. He claimed 75-year-old Berlusconi led him up to his bedroom to show off a double bed given to him by Vladimir Putin.

You mean he did he didn't take you up to share his bounty?  Even if he can do eight, that only leaves 32 for Rosemary's nephew.  Maybe talking about Darfur sort of turned him off...

You really need to see Roberta Bonasia in her candle massage  advertisement (no embedding).

As always, I thank the Wombat at The Other McCain's for assembling his large weekly collection of Rule 5 posts.
Posted by Fritz at 5:00 AM