Howling winds roared up the Chesapeake Bay on Thursday, pushing water in Baltimore to its highest level since Hurricane Isabel in 2003. In Annapolis, the water reached its greatest height since the fall of 2014.

The high water flooded parts of both downtown areas, which is becoming more common as sea levels rise because of climate change.

The strong winds, gusting up to 50 mph from the south, arrived ahead of a drenching rainstorm that unloaded widespread totals of one to two inches. The flooding was mostly the result of the wind shoving water up the bay, but rainfall added to the inundation.

Baltimore’s tide gauge showed a peak water level of 4.24 feet, the highest since Sept. 19, 2003, when Hurricane Isabel elevated the tide to 8.15 feet. Thursday’s water level was the 11th highest on record, and equated to tides 2.5 to 3 feet above normal and up to one foot of inundation above normally dry ground.

But it's not increasing in recent years due to CO2. It's the same slow melting of the ice cap that's been going on since the end of the last glaciation, and a local contribution of the land sinking because of isostatic adjustment (basically the sinking of the land after the weight of the ice cap was removed), and ground water withdrawal by man (now that's something the people actually did).

We has some high water, but nothing like 4 feet:

And certainly nothing like what we experienced in Hurricane Isabel: 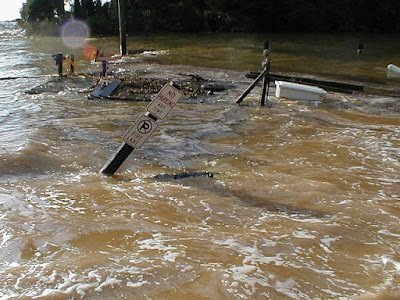 And that was after the water had largely receded
Posted by Fritz at 4:59 PM