Willis Looks at the Numbers

and concludes Attention, Citizens! The #COVID19 Emergency Is Over!

Willis is a rare independent thinker, comfortable with numbers, and not afraid to step into controversy; what Ph.Ds. were supposed to be before people like me cheapened them. So he didn't bother. He has his own blog, Skating Under the Ice, - A Journal of Diagonal Parking in a Parallel Universe, but is most often seen at Watt's Up With That:


Around the world, both state and local governments looked at wildly exaggerated computer model projections of millions of virus deaths, declared a “State Of Emergency”, and foolishly pulled the wheels off of their own economies. This has caused pain, suffering, and loss that far exceeds anything that the virus might do.

The virus hardly affects anyone—it has killed a maximum of 0.1% of the population in the very worst-hit locations. One-tenth of one measly percent.

Ah, I hear you saying, but that’s just deaths. What about hospitalizations? Glad you asked. Hospitalizations in the worst-hit areas have been about three times that, about a third of one percent of the population. Still not even one percent.

But on the other hand, more than thirty million workers in the US are unemployed. That’s about twenty percent of the number of full and part-time employees. And that job loss affects the entire household, not just the workers.

And that doesn’t count the loss of life from increased suicides and from delayed medical diagnosis and procedures. Nor does it count the fact that some 20% of the lost jobs are not expected to return. And we have calls to mental-health hotlines skyrocketing, and domestic violence through the roof. In a most ironic outcome, we have hospitals and doctors going bankrupt, and thousands of nurses being furloughed, because “non-essential” medical procedures are forbidden. Then there are the huge financial losses, both to the economy and to the government.

And in a beautifully circular process, we have trillions and trillions of dollars borrowed by the government to try to offset some of the damages that the government just caused … these lockdowns are far, far more destructive than the virus. The virus damage is short-lived, but we and our children will be paying for decades for our stupidity in killing the economy.


To prevent that peak load from crushing the medical system, it was decided in many countries to try to “flatten the curve” by slowing the spread of the virus. Note that the stated intention of flattening the curve was not to stop the virus. The declared goal was to decrease the number of new cases per day, not to decrease the total number of new cases.

In that manner, rather than having a sharp peak in medical need, the curve would be flattened out and hopefully the medical system would not be overwhelmed.


So … did this work? Hard to tell at this point. However, we do have one example of a modern country that did NOT shut down and kill their economy to fight the virus, which is Sweden. How are they doing? Here’s the comparison:


Figure 2. Deaths per ten million over time, for the hardest-hit countries.

As you can see, Sweden is in the middle of the pack—a bit better than the UK and Switzerland, same as the Netherlands and Ireland, and a bit worse than the US and France.

So if the lockdowns and the “shelter-at-home” orders are having an effect, you couldn’t tell it by looking at Sweden.


And to return to the question of lowering the peak and flattening the curve, here are the results from a number of countries. I’ll start with Sweden and the Netherlands, since per Figure 2 they are on the same path. I’m using the Complete Ensemble Empirical Mode Decomposition (CEEMD) method to remove the fluctuations due to incomplete data reporting on the weekends. See here and here for a discussion of the CEEMD method.


Both the Netherlands and Sweden are past the peak load on the medical system. Neither one was overwhelmed by that load. The difference is … Sweden did not pull the wheels off of its economy and drive millions into joblessness and despair. I know which path I prefer.

Then he goes into the US, and number of states. I won't repeat, but for the most part, we see a similar pattern, peaking around 30 days.


So … given all of that, what can we conclude?

Well, first in importance, if medical care was outpaced by the virus in some location and there was an emergency, the peak of the emergency is over now. Yes, there are some states and countries yet to pass the peak. But by and large, and in particular for the hardest-hit countries as well as for the world as a whole, the peak of the medical load from the pandemic passed about a month ago.

And that means that in those states and countries, whatever chance we had to “flatten the curve” is GONE. The opportunity has passed. For most of the world, curve flattening is history.

And since we were sold this bill of goods on the basis of “flattening the curve”, and since we’re now well past any opportunity to do that, let’s remove the restrictions. Or as I’ve said for weeks, “End The American Lockdown Now”.

Of course, the local petty tyrants who have vastly expanded powers under the “emergency” want to hold on to them. So they’re now saying that we have something new to fear, a “rebound” or a “second peak” … me, I’ve said before that I think we will see very little in the way of any second peak, for a simple reason:

As Sweden has shown, the virus laughs at our pathetic western-style “shelter in place” regulations.

Now, here’s my argument. The various local instant totalitarian rulers derive their power from the State of Emergency. But the emergency is past, we can’t flatten the curve now. We’re past that, which means there is no further emergency. So them holding onto that power now that the emergency is ended is illegitimate and illegal. It’s also in some cases unconstitutional. 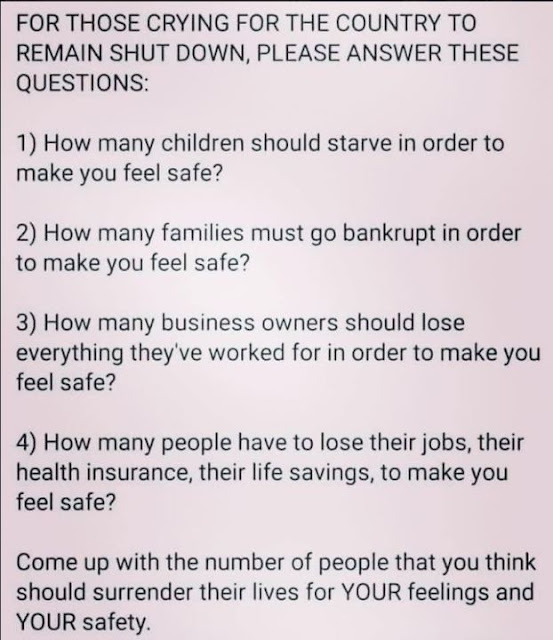 And he follows with some sensible actions to proceed, basically voluntary hygiene and  social distancing, testing and contact tracing. Nothing radical.

And if you accept the moved goal post that we're now sheltering in place until a vaccine is ready, there's more bad news for you at WUWT from Rud Istvan: Wuhan Virus Vaccines


There are at least two insurmountable potential Wuhan vaccine problems.

It is an enveloped single stranded positive sense RNA virus. It has three neutralizing antibody targets: capsid N protein, and the S1 and S2 sites on the S spike protein. See rumination #6. With careful antibody selection, these can provide exquisitely good antibody test/vaccine targets. The newly EUA approved Abbott antibody test is 99.6% sensitive and 100% specific! (See rumination #6 for the HUGE beneficial significance of this new Abbott antibody test development compared to the Becton-Dickenson test announced a month ago.)

But except for a canine enteric coronavirus vaccine (Merck Animal Health), which does NOT protect against the canine respiratory form of the same virus, there has NEVER been a successful coronavirus vaccine developed–ever. So despite Dr. Fauci’s hopes and efforts, that may well remain true with Wuhan. This is a risky uncharted business with significant economic consequences.

So we can't afford to wait for the vaccine. How's that AIDS vaccine coming, Dr. Fauci?
Posted by Fritz at 4:50 PM