We're mostly dealing with stuff left over, no particularly new issues have arisen since the last post. Everyone went to the beach for the long weekend except a few unlucky writers left behind to fill pages and collect clicks.

Seth Barrett Tillman at the New Reform Club asks What the Media will not ask, but what I already asked


Will anyone in the media inquire from: Judge Sullivan, John Gleeson, Beth Wilkinson, and the Chief Judge for the United States District Court for the District of Columbia, and ask:

If Gleeson’s work and Wilkinson’s work is pro bono or paid?

If paid, then paid by whom?—Sullivan or the Treasury (or other)?

If the Treasury, then through what fund or under what specific legal authority?

Monte Kuligowski at AmThink says The Flynn Frame-Up: Everything Was Done by the Book, if "by the book" means Machiavelli's "The Prince" or Alinsky's "Rules for Radicals." But it was not limited to Gen. Flynn, Susan Quinn at Ricochet reminds us of The Revolting Inquisition of K.T. McFarland, Flynn's deputy.

Andy McCarthy at NR says Flynn Was Not Masked because the FBI Framed Him as a Clandestine Agent of Russia. Not fair to say "the FBI". It was Comey, McCabe, Strzok, Page, and Pientka, with a little assistance from Sally Yates and Lisa Page at DOJ. We can make a crime out of this if we try hard enough. That's how this works. Sundance Sunday Talks: Andy Biggs Discusses “Why Now” as Chris Wray Initiates an FBI Investigation…

I expect to hear soon that Joe Pientka has resigned, making him the last of original top level coup originators to sneak out of range to be hired by CNN as a law commentator.


Keep in mind there are dozens of currently employed FBI officials, agents, analysts and administrators who participated in the effort. As a result of USAO Jeff Jensen reviewing the activity; and in combination with DNI Ric Grenell declassifying and releasing the information to the public; FBI Director Chris Wray has no choice.

Remember, despite his involvement FBI supervising agent David Archey was promoted and now leads the Virginia field office. Additionally, one of the key actors, FBI Agent Joe Pientka, was transferred to San Francisco. Both Archey and Pientka are part of a much larger network of FBI officials that remain currently employed and have never been held accountable.

Agent’s Pientka and Archey were coordinating their corrupt operations with several dozen FBI officials and staff. 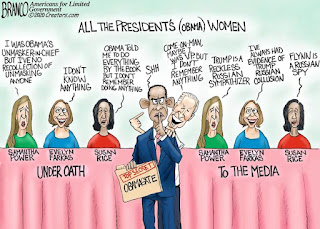 Hopefully his last days are as productive as the rest of his tenure, from Chuck Ross at Da Caller, ‘Those Are Coming’: Grenell Says He Is Working To Declassify More Flynn Documents. Zing!


Schiff, a Democrat, requested the call transcripts as well as records related to 39 so-called “unmasking” requests that Obama administration officials made for intelligence reports that mentioned Flynn. Grenell declassified that list earlier this month, and it was released on May 13.

“Those are coming,” Grenell wrote to Swalwell. “It’s very important for the public to see ALL of them.”

He then took a swipe at the Democratic congressman, writing that “for too long the public has been misled.”

“Just compare your committee’s transcripts to your public statements!”

BPR, President Trump tells Sharyl Attkisson: ‘I have a chance to break the deep state,’ in exclusive interview. I saw this part of the interview last night. A good start.

From Matt Mayer, as Spectator USA, Obama should apologize to Trump "Most of what has transpired over the last three years could have been avoided" Yes, he should, but he won't. He achieved part of what he wanted; tying Trump up and smearing him. So should the media, for the same reason. More to the point, they should also reveal who the sources are that gave them fake news for political purposes. Newsbusters, Why Doesn't CNN Care When Anonymous Sources Give Them Fake News? 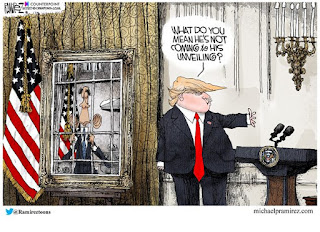 Far too much Washington journalism is reliant on anonymous sources, and the public has no earthly idea of the agendas and ideologies of the "senior government officials" or just "sources" who can be used to ruin a presidency or a congressional career.

Larry O'Connor at Townhall threw a strong headline at Team Zucker: "CNN Was Used to Spread Lies And They're Just Fine with That." He began:


When an anonymous source gives bad information to a journalist, that source should no longer be protected by the cloak of anonymity. And the angriest people involved in the entire scenario should be the reporter who passed on the bad information and the company that broadcast or published it.
So, why is CNN so complacent about one of the biggest fake stories in the entire Russian Collusion affair?

O'Connor referred to a story posted on September 18, 2017 by Evan Perez, Shimon Prokupecz, and Pamela Brown using anonymous sources to claim the FBI had a FISA warrant to wiretap Trump campaign manager Paul Manafort before and after the 2016 election.

That story may have spurred judicial action: "It appears as though the press reports of the FISA warrant may have compelled the judge overseeing the Manafort grand jury to make a ruling that compelled Manafort's lawyer to testify (an apparent breach of attorney/client privilege)."

It turned out that Justice Department Inspector General Michael Horowitz emphatically stated in his report that not only did the FBI's Crossfire Hurricane team not seek a FISA on Manafort, they never even “seriously considered” FISA surveillance of Manafort! This was a serious Fake News moment.

Well, because then that source would never give them fake news again! And that's their product.

John Fritze at USA Today, 'You should drop out': Trump spars with ex-Attorney General Jeff Sessions amid battle for Alabama Senate seat. He should forgive and forget Sessions, who was a good man promoted beyond his capabilities. He was too easily cowed by the "Deap Staters."

Speaking of fake news, or at least news that is being deliberately misinterpreted, sundance says about those 16,000 Unmasking Requests in 2018 They Say – While They Simultaneously Ignore The Special Counsel… So, Mueller's Weissman's goons were unmasking left and right? Makes sense.
Posted by Fritz at 10:17 AM