Russiagate: The Flaying of Gen. Flynn 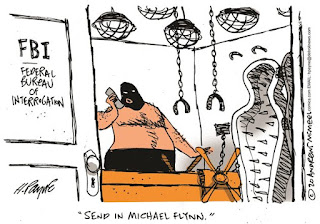 Still mostly Flynn. Margot Cleveland at Da Fed has a good review on how it all went down at Your Guide To The Obama Administration’s Hit On Michael Flynn to rev up your outrage for the remainder. Jack Cashill at Am Think's  How Michael Flynn Became Target Zero in Obama’s Russia Collusion Plot deals more with the motives than the mechanics.


Dan Chaitin at WaEx cites Devin Nunes who  suspects FBI cover-up of information. That's an understatement. It's been clear for some time that the FBI has been holding back evidence that doesn't paint it in a good light. Sundance at CTH finds Jeff Sessions a bit late to the party, too, Jeff Sessions Wonders if There Was Sufficient Evidence for Trump-Russia Investigation…. You'd know, if you hadn't recused yourself, asshole.


“We write to request that you immediately review the actions of the FBI in targeting LTG Flynn. The American people continue to learn troubling details about the politicization and misconduct at the highest levels of the FBI during the Obama-Biden Administration.

Even more concerning, we continue to learn these new details from litigation and investigations—not from you. It is well past time that you show the leadership necessary to bring the FBI past the abuses of the Obama-Biden era.” 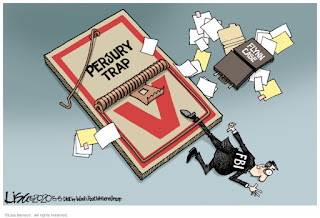 Good luck getting that past Schitt. Here’s the full six page letter.  From one Barr to another (via Da Caller, Bob Barr: Michael Flynn’s Legal Tormentors Should Be Prosecuted

Some hyperbole from Kurt Schlicter at Town Hall, America Doesn’t Have A Justice System Anymore


The good news is that you might get out of future jury duty, because when you are asked under oath about your own biases during a federal criminal case jury selection you would have to answer honestly by responding, “Your Honor, I don’t trust a damn thing anyone in the FBI says.”

If the heirs of Efrem Zimbalist, Jr., were to go up on the stand and testify, the recent disgraceful revelations about how their bosses tried to frame LTG Mike Flynn mean you would be entirely correct to grant them the same credibility as the dude caught wearing a black cape, a Lone Ranger mask, and a nametag that says “Willie Sutton” while tip-toeing out of First National carrying a big sack with a dollar sign on it as the alarm goes off.

Oh, and if an FBI agent asks if he can ask you some questions, try not to burst into laughter before you reply, “No, I assert my right to remain silent” and call your lawyer.

And this sorry state of affairs is all the FBI’s fault.

Every bit of it. At one time it was the pride of American law enforcement, a symbol of integrity, honesty and incredible courage under fire. But now when we think of the FBI in “action,” we think of a couple dozen special agents decked out in full Delta Farce chic dragging an elderly gadfly out of bed in his PJs after making sure to tip-off CNN that this high-risk op was about to go down.

The FBI had an incredible legacy of honor and respect and took a giant Schiff on it.


The CIA Inspector General has taken more than a year to clear the release of a House Intelligence Committee report which contradicts the key conclusion of the intelligence community assessment on Russian interference in the 2016 election, according to the former chief of staff of the National Security Council.

The January 2017 Intelligence Community Assessment (ICA), prepared at the behest of President Barack Obama, claimed that Russia interfered in the presidential election in order to help candidate Donald Trump. The House Intelligence Committee’s public report (pdf) on Russia had already challenged the analytic tradecraft behind this central claim and suggested that the process of arriving at the assessment was not free of political interference.

A separate, classified report holed up at the office of the CIA Inspector General (IG) sheds damning light on the role then-CIA Director John Brennan played in the preparation of the report, former National Security Council Chief of Staff Fred Fleitz learned from House Intelligence Committee staff. A source familiar with the report’s fate would not deny that the report went to the office of the CIA IG.

The report states that Brennan overruled agency analysts who wanted to include strong intelligence in the assessment to show that Russian President Vladimir Putin wanted Hillary Clinton to win the election, Fleitz says, citing conversations with House Intelligence Committee staffers. Brennan had also rejected analysts who wanted to strike weak intelligence from the report which suggested that Russia favored Trump, Fleitz said.

Ace, Epoch Times: CIA Inspector General Is Sitting On a Report That the IC Wanted to Conclude That Vladimir Putin Favored Hillary Clinton in 2016, But John Brennan Overruled Them


This was a set-up from the start.

The claim that "Putin wanted Trump" was absolutely fundamental and central to their coup effort -- and it was all a lie concocted by former (?) Communist Brennan.

A lot of people need to go to jail.


The SSCI hates Grennel with the ferocity of a thousand supernovas because Grenell doesn’t give a f**k about their swamp life. Better yet, Grenell smacks them around publicly on Twitter whenever the SSCI dispatch the orcs from the deep swamp intelligence apparatus. Every time orcs poke their heads out of the DC labyrinth, Grenell smacks them with a billion mega-watt sunlight hammer. They shriek and retreat to the dungeon.

The good news for the SSCI is that Grenell can only stay in the ‘acting’ role until September of this year. However, the bad news is if the SSCI rejects John Ratcliffe then Ric Grenell gets another year to antagonize the corrupt senators, swing the sunlight hammer & expose the darkest secrets of their beloved swamp. {{Grumble – Grumble}}

As a result President Trump has pinned the SSCI into the corner of their cave. If the SSCI rejects Ratcliffe, they are stuck with Grenell; and Ric really is a guy who doesn’t give a f**k about the SSCI’s indulgent self-interest and thirst for power.

As Senator Angus King said: “If we vote down Ratcliffe, we’re stuck with Grenell.”