Really more than I wanted to deal with this morning. Well, lets get started.

The Flynn Affair is still roiling the right side of the news, but being largely ignored and buried on the wrong side. John Solomon at JTN clearly on the right side, Dirty Dozen: The 12 revelations that sunk Mueller's case against Flynn, while on the wrong side, NYT (via Hot Air) whines that Dropping Of Flynn Case Heightens Fears Of DOJ Politicization. Too late for that; Obama politicized DOJ beyond measure. WaPoo also whines Barr undercuts Mueller investigation as Trump cheers him on and proposes that the Mueller investigation ended too soon. Clearly; they didn't get their intended target. From atop Da Hill, Comey, McCabe slams Justice for dropping Flynn case: 'Pure politics designed to please' Trump. My irony meter is broken. Mike Walsh at NYPo, Why the dismissal of Michael Flynn’s case could win Trump reelection. From your keyboard to God's ears, I suppose.

Jonathon Turley get into the issue with Did The Mueller Team Violate Brady and Flynn Orders? The short answer is yes.


I have been a long critic of the failure of federal judges to sanction prosecutors for misrepresentations and withholding of evidence. That could prove the case here but that will not alter the fact that this is in open defiance of these orders. I have been counsel in cases where clear violations occurred, including a well-known case in front of Judge Sullivan that led to years of hearings before a Special Master and federal magistrate. This material was clearly within the court orders to be produced. 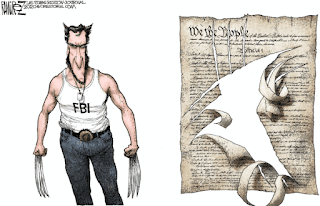 At Breitbart, Mark Levin Celebrates Vindication of ‘The Broadcast That Will Go Down in History’. Power Line has The Week in Pictures: Flynn Effect Edition. Jerry Dunleavy, WaEx, Sally Yates learned of Flynn targeting from Obama as Comey kept her in the dark, declassified documents show. A good mushroom. Paul Bedard, WaEx, White House Report Card: Wins on Flynn and Iran, but jobs and virus crises smother nation.

Nick Arama at Red State, Democrats in Full Panic, Trying to Take out Bill Barr With New Letter. Nobody in their right mind is going to fall for that. Bonchie at Red State, Michael Caputo Releases Receipts, Shows Rep. Eric Swalwell Was Witness Tampering. They always accuse others of that which they are doing themselves.

On the matter of the recent release of transcripts from the House Intelligence Committee that Schiff had suppressed, Roger L. Simon at ET calls Richard Grenell, a True Hero of Our Times, I agree, and if you disagree you're a homophobe.

I’ve been going through the interview transcripts that ODNI forced @AdamSchiff to release. It’s now clear why every Republican on his committee in 2019 called for his resignation. He knew the closed door witnesses didn’t support his innuendo and fakery on Russia collusion.
— Eli Lake (@EliLake) May 9, 2020

Matt Margolis at PJ Media sums up Obama Officials Had No 'Empirical Evidence' of Trump-Russia Collusion, Intel Transcripts Show, and yet they kept pushing it on the public. ET, Transcripts Contradict Comey’s Claim That DNC Denied FBI Access to Servers, so he could have had them, and chose not to? I wonder why. Jenny Taer at Sara Carter, Pres. Trump Calls Comey ‘Dumb as a Rock’, Says ‘There’s something wrong with him’

Liz Vaughn at Red State, Huge: Crowdstrike CEO Has NO Direct Evidence Russia Stole/Exfiltrated DNC Emails. It's kind of like they were worried something contradictory to one of the central tenets of the Russia helped Trump story might emerge. Lee Smith at NYPo, Adam Schiff lied about the Trump investigation — and the media let him. Why should we be surprised?

A prominent member of Congress committed treason in full view of the public -- literally a coup attempt. The gravity of the situation makes one think of the death penalty. Reality suggests he will have an easy reelection. Our system failed us hard.
— Scott Adams (@ScottAdamsSays) May 9, 2020

Undercover Huber, Remember this thread? Recently declassified HSPCI interview of the Trump Tower translator now proves Adam Schiff knew *2 and half years ago* there was no Collusion at that meeting

Revealed this week about RussiaGate:

Everything the MSM told you was a lie

Everything Congressional Democrats told you was a lie

Everything the "Intelligence Community" told you was a lie

Everything we told you about the Russia Hoax was the Truth


BPR, ‘He got caught!’ Trump says Adam Schiff should be in jail, he’s a ‘sick, sick man with a 9-inch neck’. Is that 9 inches long or 9 inches in circumference? Matt Vespa, Town Hall, Oh, This Keeps Getting Better: Former Obama Official Admits She Lied About Having Evidence of Russian Collusion

"It felt like the right time to FRAME AN INCOMING ADMINISTRATION". I hope people hang...
— Yeah Right (@YeahRyte) May 8, 2020


The Drudge Report has become part of the leftist media cabal slanting coverage to defeat President Trump. There were dramatic revelations in the plot to get Trump this week–virtually ignored by The Drudge Report.

DOJ dismissed the charges against General Mike Flynn because of clear, unequivocal evidence of the FBI’s plot to entrap him by circumventing normal White House clearance procedures just four days after the inauguration. In his own testimony, James Comey bragged about sandbagging Flynn.

Obama DOJ and Intelligence apparatchiks swore to under oath before Schiff’s secret basement hearings that they had no evidence of “Russia collusion” by Trump’s campaign. Yet they claimed the opposite contemporaneously on national television. Clapper was the worst, calling President Trump a Russian asset controlled by Vladimir Putin.

The Drudge Report ignored or barely reported on these “bombshells.”

I’ve read unconfirmed reports that Matt Drudge sold his Drudge Report in 2019, but I could not find any details. No matter. The current content of The Drudge Report is proof enough that someone who hates our President has acquired it.

I had noticed. I've also started watching The Bongino Report, which seems to be attempting to fill the void.

Regarding the "leaked news" the former Preznit Obama thinks that "our basic understanding of rule of law is at risk" in DOJ withdrawing it's accusations against Flynn . . ..  Stacy McCain,  Is Obama Living in an Alternative Reality?. Nick Arama at Red State, Jonathan Turley Rips Apart Obama’s ‘Leaked’ Statement About the DOJ and Flynn, and It’s Glorious

President Obama is being quoted on Flynn, saying "There is no precedent that anybody can find for someone who has been charged with perjury just getting off scot-free." It is a curious statement. First and foremost, Flynn was not charged with perjury... https://t.co/fWlSFWkp8S
— Jonathan Turley (@JonathanTurley) May 9, 2020

Althouse digests "Former President Barack Obama is being quoted from a private call that the 'rule of law is at risk' after the Justice Department moved to dismiss the case against... Michael Flynn."


"Obama reportedly told members of the Obama Alumni Association that 'There is no precedent that anybody can find for someone who has been charged with perjury just getting off scot-free.'... [But] former Attorney General Eric Holder... moved to dismiss such a case based on prosecutorial errors in front of the very same judge, Judge Emmet Sullivan.... The Obama statement is curious on various levels. First... Flynn was never charged with perjury... Second, there is ample precedent for this motion... Third, there is also case law.... Fourth, there are cases where the Department has moved to dismiss cases on grounds of prosecutorial misconduct or other grounds touching on due process, ethical requirements or other concerns.... The rare statement by President Obama is also interesting in light of the new evidence... that Obama was following the investigation of Flynn who he previously dismissed from a high-level position and personally intervened with President Donald Trump to seek to block his appointment as National Security Adviser. Obama reportedly discussed the use of the Logan Act against Flynn. For a person concerned with precedent, that was also a curious focus. The Logan Act is widely viewed as unconstitutional and has never been used to successfully convicted a single person since the early days of the Republic. Now that is dubious precedent."

David Marcus at Da Fed, Barack Obama Forgets That Bill Clinton Got Away With Perjury. He doesn't forget; he just doesn't care. The NewNeo understands; A “pretty darn invested” Obama rallies the troops and gives them their talking points

The question gives sundance an opening for an opus of review material Why is Obama Panicking Now? – The Importance of Understanding Political Surveillance In The Era of President Obama…

Rushbo calls it Vindication Day! How Obama Hatched the Coup in an Oval Office Meeting on January 5, 2017

And from the Dept of WTF?, De Beast informs us Rosie O’Donnell Reveals She’s Helping Michael Cohen With His ‘Spicy’ Trump Tell-All Book. The last thing I want to hear is anything "spicy" from Rosie or Cohen.
Posted by Fritz at 10:50 AM