Er, I mean transcripts. This is the first day in a while that something other than the fucking of Gen. Flynn ("First we fuck Flynn, and then we fuck Trump" - Andy McCabe) has dominated the news cycle. Now it's the transcripts from the hearings of the House Intelligence Committe (an oxymoron if there ever was one), carried out under Devin Nunes while he was in command, then buried by Adam  Schiff, who has never been shy to leak transcripts favorable to his cause.

Grenell penned a letter -- obtained by Fox News -- this week to Schiff, D-Calif., notifying him that transcripts of all 53 interviews -- which add up to more than 6,000 pages in total -- related to foreign interference in the 2016 election can be released.

“All of the transcripts, with our required redactions, can be released to the public without any concerns of disclosing classified material,” Grenell wrote to Schiff in a letter dated May 4.

The committee, in September 2018, voted in “unanimous and bipartisan fashion” to release the transcripts of witness interviews that they conducted during the panel’s Russia probe. In November 2018, the committee transmitted the transcripts to the Office of the Director of National Intelligence for an “interagency classification review to prevent the inadvertent disclosure of classified information.”


Acting Director of National Intelligence Richard Grenell has now upped the ante. All 53 transcripts are ready for release, and most have been for almost a year. If Schiff doesn’t release them, Byron York reports, Grenell is threatening to publish them himself under the authority of the previous unanimous HIC vote:

John Solomon at JTN, Adam Schiff may be the biggest loser of Russia probe declassification. Of course, it will show Adam to be one of the biggest liars in that lot, and that's a pretty high bar.

I mentioned last night that it was Schiff himself who wanted these transcripts released — back when it was easier to spin them as Russia collusion and not Democrat wrongdoing. Now he’s done an about face. https://t.co/eYjzsZuUVd
— Mollie (@MZHemingway) May 6, 2020

As Nunes notes, even with the release the media have a vested interest in not covering the content of the transcripts as released; because the media along with Adam Schiff lied about what was happening during the depositions at the time.

If I read Nunes right, don't expect bombshells, just politicians being politicians. From sundance, Forced Transparency – ODNI Richard Grenell Reminds Adam Schiff He Can Release Transcripts…, and has a interesting list of the 53 interviews. And as Chuck Ross at the Da Caller reports, stuck between a rock and a hard place, House Intel Chairman Adam Schiff Will Release Russia Probe Transcripts, after as much delay as he can muster: “Our review of ODNI’s newly proposed redactions will be as expeditious as possible given the constraints of the pandemic, and we look forward to releasing these transcripts.”

But these aren't the only releases of classified information that Richard Grenell is involved with. Jerry Dunleavy at WaEx,  Declassifications by Barr and Grenell lead senator to lift two-year hold on counterintelligence nominee


A two-year standoff over a top counterintelligence nomination ended this week after a Senate Republican said the nation’s spy chief and attorney general provided long-sought transparency for congressional investigations.

William Evanina, a former FBI special agent, has led the National Counterintelligence and Security Center since 2014 and in February 2018 was nominated by President Trump to be the first Senate-confirmed director of the center. But since June of that year, Iowa Sen. Chuck Grassley has blocked the nomination as a form of protest against Department of Justice leadership and the Office of the Director of National Intelligence for not providing Congress documents related to the government’s investigation into Russian election interference and Trump’s presidential campaign.


As Acting DNI, this individual promptly instituted a hiring freeze and a reorganization whose purpose has not been communicated to the intelligence oversight committees," he continued.

But Grenell has made efforts to communicate his work to Capitol Hill. In fact, Grenell reached out to Warner ahead of today's hearing and offered to brief him on the implementation of badly needed reforms. Warner refused the meeting and falsely attacked Grenell anyway.

Back to the Flynn fiasco, Brian Cates at Uncover DC calls it The Breaking of the Seals At NYPo, Pressure mounts on FBI director as Trump, GOP fume over Flynn documents. John Sexton at Hot Air, Former FBI Agent: Michael Flynn Was Railroaded By The FBI. There are, or at least were, some good people at the FBI. But as they say in the Peter Principle, the cream rises to the top, and sours.

News Thud, Republicans turn up pressure on FBI Director Wray as report suggests Trump “would love to replace” him… It should happen, but it's not politically convenient. Make his life miserable until he quits. Adam Mill at AmGreat, Are Russia Collusion Hoax Holdouts Still Operating Within the FBI?. Probably, maybe even Christopher Wray himself. Dana Boente is still around somewhere, as is mystery agent Joe Pientka. 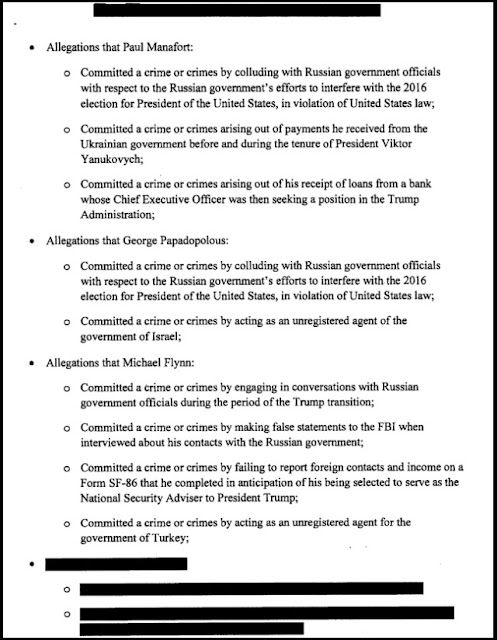 Not a lot of that worked out. They got Manafort on financial crimes and Papapop on misremembering a date (they tried to set him up to look like an agent of Israel, but he wisely chose not to bite), and of course, they forced Flynn to plead guilty to lying to the FBI, a crime not on the list, by threatening his son. That's quite a lot of glory to the Mueller team.

We really need to get that Logan Act shit off the books; charge John Kerry, and force his to appeal it with Teresa's money, all the way to the Supreme Court.


The office of former President Barack Obama in March privately bashed Senate Republicans’ investigation of former Vice President Joe Biden and his son in Ukraine, a probe it deemed as lending credence to a “Russian disinformation campaign,” according to a letter obtained by Fox News.

The letter, addressed to the National Archives and Records Administration (NARA), which manages presidential records, was written in response to a request on Nov. 21, 2019, by Republican Sens. Chuck Grassley and Ron Johnson for Obama administration records on Ukraine-related meetings.

The letter referred to their request as improper use of the NARA’s release terms and a supposed effort “to shift the blame for Russian interference in the 2016 election to Ukraine.”

Sen. Paul was asked about my story yesterday on Obama’s letter to the National Archives, saying "it's not surprising to me that he would try to keep a lid on it and not let any records come to the public."

Except Obama allowed the records to be released.https://t.co/4FLgmuwbWY
— Emma Loop (@LoopEmma) May 6, 2020