Four calls and one voicemail are transcribed over 24 pages released by Republican lawmakers.

“Lt. General Flynn, his legal team, the judge and the American people can now see with their own eyes – for the first time – that all of the innuendo about Lt. General Flynn this whole time was totally bunk,” Sen. Chuck Grassley (R-Iowa) said in a statement. “There was nothing improper about his call, and the FBI knew it.”

Grassley added: “After all the screw-ups and malicious behavior by FBI and DOJ officials during the Russia investigation, we simply cannot take them at their word anymore. We need oversight and transparency to sort out this mess.”


Kislyak goes on to discuss sanctions, saying that “one of the problems among the measures that have been announced today is that now FSB and GRU are sanctions, are sanctioned, and I ask myself, uh, does it mean that the United States isn't willing to work on terrorist threats?”

Flynn dismisses the comments, by saying: “Yeah, yeah ... yep ... yeah.” He then urges Kislyak: “If you have to do something, do something on a reciprocal basis, meaning you know, on sort of an even basis. Then that, then that is a good message and we’ll understand that message.

“And then, we know that we’re not going to escalate this thing, where we, where because if we put out--if we send out 30 guys and you send out 60, you know, or you shut down every Embassy, I mean we have to get this to a--let's keep this at a level that uh, is even-keeled, okay? And then what we can do is, when we come in, we can then have a better conversation about where we're gonna go uh, regarding, uh, regarding our relationship.”

Now release the "original" 302 so we can compare what they claim he actually told the FBI agents (not that we can trust it).

This is apparently construed as Flynn "discussing" sanctions, although I can imagine him thinking he was talking about Middle Eastern terrorism. It's also asking Russia not to escalate and make matters worse, which is apparently what the Obama administration was trying to do to Trump.

Via the Wombat's In The Mailbox: 05.29.20,  Twitchy has an abundance of treats.  ‘Beyond angry’: Newly declassified Flynn-Kislyak transcripts should END the ‘3-year nightmare for General Flynn’

The Flynn-Kislyak call transcripts exonerate Flynn and indict Mueller for deceitful sleight-of-hand meant to obscure the truth. There's a reason Mueller refused to turn the transcripts over to Flynn's defense team. https://t.co/1ztzqWUPUI
— Sean Davis (@seanmdav) May 29, 2020

But the usual suspects continue to claim the transcripts support their position.

Schiff: "These transcripts fully affirm what we already knew from Flynn’s Statement of Offense ... that Flynn in fact lied about his interactions with the Russian Ambassador. It should be no surprise that the President and his allies wish to promote conspiracy theories." https://t.co/k0HjCfHEr3
— Kyle Griffin (@kylegriffin1) May 29, 2020

It's like a Rorschach blot. Everyone sees what they want to see. Margot Clevelands notes Flynn asking Kislyak not to let Obama box them in:

THREAD: I'm angry. Beyond angry. I beg every American who cares about the truth and this country to read the transcript--THE TRANSCRIPT--of @GenFlynn calls with the Russian ambassador. Some points follow, but let me start with this out-take. /1 pic.twitter.com/rPMnFYDb60
— Margot Cleveland (@ProfMJCleveland) May 29, 2020

That thread is particularly powerful.

8/ The focus was on following Trump's inauguration. pic.twitter.com/94Kg69TRte
— Margot Cleveland (@ProfMJCleveland) May 29, 2020


The transcript of the December 29 conversation, which was cited by Mueller, does not include a request from Flynn that Russia “refrain from escalating” in response to U.S. expulsions of Russian diplomats. According to the transcript, Flynn asked Kislyak for Russia’s response to be “reciprocal” so that the U.S.–not Russia–would not be forced to escalate beyond the expulsions. The transcript makes clear that Flynn fully expected Russia to respond to the situation by expelling U.S. diplomats in response to the Obama administration’s move to expel nearly three dozen Russian diplomats from the U.S., and that his primary concern was preventing a situation where the U.S. would have to escalate tensions in response to Russia.
. . .
Mueller’s operation also conflated discussions of financial sanctions levied against Russian entities and individuals via executive order on December 28, 2016 with the expulsion of Russian diplomats, which were two separate and distinct issues. In fact, the specific executive order cited by Mueller in his charging documents against Flynn pertained only to Treasury-enforced financial sanctions against nine Russian intelligence individuals and institutions, not to the separate expulsions of Russian diplomats, which were enforced by the U.S. State Department. In his remarks announcing the various maneuvers by his administration against Russia, President Obama even noted that sanctions and expulsions were entirely separate issues handled by different agencies and requiring different legal authorities.

“I have issued an executive order that provides additional authority for responding to certain cyber activity that seeks to interfere with or undermine our election processes and institutions, or those of our allies or partners,” Obama said at the time. “Using this new authority, I have sanctioned nine entities and individuals: the GRU and the FSB, two Russian intelligence services; four individual officers of the GRU; and three companies that provided material support to the GRU’s cyber operations.”

Sort of in the weeds stuff. The main take away is that Flynn was discussing perfectly legitimate items of interest with Kislyak, and had no reason to lie to the VP or the FBI. What the FBI is considering a lie seems to be a case of not remembering the fine details of a conversation which he was not prepped to answer when ambushed by FBI agents Strzok and Pientka. Speaking of in the weeds, let's not leave out sundance at CTH, Nothing Inappropriate – DNI John Ratcliffe Releases Wiretapped Flynn-Kislyak Transcripts and FBI Summaries (“CR Cuts”) Of Those Transcripts…


A fast review of the transcripts (also embed below) shows there was nothing inappropriate or improper about the conversations at all. Quite the opposite: Lt. General Flynn was direct, diplomatic, polite and represented the interests of U.S. policy from both the outgoing Obama administration and incoming Trump administration.

The views expressed by Lt. General Flynn did not impede or obstruct outgoing Obama policy nor did they undermine any position during the transition. Any media reporting to the contrary was completely false.

The FBI summaries or “CR Cuts”, created by FBI analysts, are what FBI Director James Comey gave to former DNI James Clapper on January 4th, for use in briefing former President Obama. The summaries are FBI interpretations of what the calls contained.

It has been my long-standing suspicion the FBI summaries (CR Cuts) will not accurately reflect the content of the calls; and were purposefully manipulated by the FBI to give a false impression that Flynn was undermining Obama. I am doing that comparison now.

Here’s the summaries and transcripts . . .

J.E. Dyer at Da Lid, More Strzok-Page Texts: FBI Knew Immediately Of Kislyak-Flynn Phone Calls. Of course, because they were intercepting all of his calls. 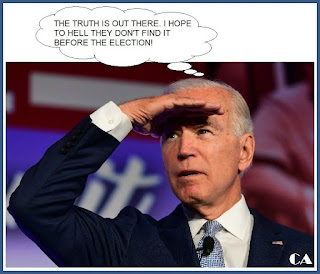 But it isn't all Flynn, George Neumayr at AmSpec, Obamagate Won’t Go Away "Too many questions remain unanswered." Christian Datoc at Da Caller, DOJ Reviewing A Trove Of Documents From ‘Very Beginning Of The Russia Investigation’ For Public Release


White House press secretary Kayleigh McEnany confirmed at Thursday’s press briefing that the Justice Department is in the process of reviewing for public release a trove of documents pertaining to the origins of the Russia investigation.

Former acting Director of National Intelligence Richard Grenell declassified the documents prior to swearing in his replacement, John Ratcliffe, on Tuesday. One senior administration official told the Daily Caller on Thursday that the “documents are from the beginning of the Russia investigation. The very beginning.”
. . .
Trump himself hinted at a forthcoming release of Russia investigation documents during a recent interview.

Oh goody! Greg Jarrett's outfit, FBI Document From, To, and Approved by Peter Strzok Provides Smoking Gun Russia Collusion Was ‘Illicit, Made-Up Investigation’. More on the incestuous, almost masturbatory origins of the Russia probe. A letter from Strzok to Strzok.

The Hill reports “on that basis alone, the document is an absurdity, violative of all FBI protocols and, therefore, invalid on its face.” The reason being, “an agent cannot approve his or her own case; that would make a mockery of the oversight designed to protect Americans.”

Trump is “not ever going to become president, right? Right?!” Page wrote.  “No. No he won’t,” Strzok responded. “We’ll stop it.”


FORMER VICE PRESIDENT JOE BIDEN’S CAMPAIGN has canceled plans for a fundraiser headlined by Andrew Weissmann, a former top prosecutor with Robert Mueller’s special counsel team who has been a lightning rod among supporters of President Trump. The June 2 event had been billed as a “fireside chat” with Weissmann, who departed Mueller’s team last year and is working on a book about his role in the probe, and Anne Milgram, a former New Jersey attorney general. The fundraiser was pulled shortly after it was posted late last week, but not before it garnered widespread media attention, people familiar with the decision told the Journal’s Ken Thomas.

From on top of Da Hill Roger Stone to surrender to prison by June 30. I expect some higher court to order a new trial based on the jury thing. By then the whole Mueller investigation may be totally discredited.