Wow, quite a crop compared to yesterday. Lots of articles looking back on Flynn and the FBI. For example,  The Framing of Flynn and the Logan Act by James V. DeLong at AmThink. We need to get the Logan Act off the books ASAP. I suggest bringing John Kerry up on charges, and letting him use Teresa's money to appeal all the way to the Supremes. No friend of Donald Trump, even the editors at NR call The Flynn Case  a Travesty,  the Issue and Insights editorial board finds that The Flynn Revelations Reveal A Criminal Conspiracy At The FBI and the Dersh thinks Michael Flynn case places both FBI integrity and civil liberty on the line, but what does he know? 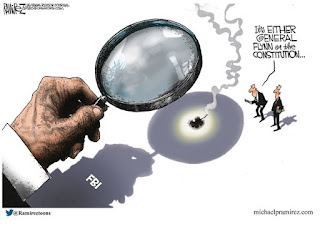 Charles Breitel, one of the most distinguished appellate judges in modern history, answered these important questions within the context of grand jury testimony. Breitel explained, “The primary function of the grand jury is to uncover crimes and misconduct in public office for the purpose of prosecution. It is not properly a principal aim of the grand jury, however, to ‘create’ new crimes in the course of its proceedings.”

He continued, “Thus, where a prosecutor exhibits no palpable interest in eliciting facts material to a substantive investigation of crime or official misconduct and substantially tailors his questioning to simply extract a false answer, a valid perjury prosecution should not lie.”

Another federal court, indeed in the same district where Flynn allegedly committed his crime, has also made a similar point within the context of a legislative investigation, stating that “extracting testimony with a view to a perjury prosecution” is not a “valid legislative purpose.” These judges are right, although other judges have disagreed with them. What they said is just as relevant within the context of questions by the FBI.

Mark Penn, Flynn documents are the 'smoking gun' on Comey's FBI. And the fact that it took them so long to come out reflects poorly on Christopher Wray's FBI, with even Axios noting Inside FBI director Chris Wray's fate - New Flynn revelations heighten Trump's discontent with FBI director. John Solomon at his JTN writes Pressure mounts on Wray as FBI behavior in Russia case comes into clearer focus. Johns podcast.

Liz Vaughn at Red State, It’s Time to Fire Christopher Wray…Now. At the very least, it's time for Trump to bring him into the Oval Office and give him a come-to-Jesus talk. CNS News observes Rep. Jordan Asks, 'Why Didn't Chris Wray Tell Us?' Flynn's Attorney Has an Answer. A little sideways on Chris Wray, Documents reveal FBI head defended encryption for WhatsApp before becoming fierce critic - Christopher Wray defended encryption in 2015 as a lawyer, contradicting his current opposition to the practice

Sundance isn't impressed with Trey. Another long interview with, Lee Smith Lee Smith Discusses Latest Flynn Documents: “Why was the FBI Holding Them Back So Long?”…

via Fox, KT McFarland: Michael Flynn didn’t commit a crime – he was set up by Deep State to cripple Trump presidency.


Okay let’s listen in on a Chris Wallace phone call he makes while on vacation (while he makes dozens each day), get the transcript, call him up and ask to chat about that call, say he doesn’t need a lawyer, keep him “unguarded” and “relaxed”, and send an agent he’s met before.
Then don’t show him the transcript to jog his memory, or advise him he’s under investigation, or read him a warning about 1001 lying laws about misleading federal agents.
Then come away thinking he didn’t accurately describe the call but wasn’t giving *any* indications of lying in the opinion of the FBI agents & leave the case dormant (except for going to senior people working for Chris’s boss at Fox and telling them he’s a liar, so he’s fired).
Then open a case against Wallace again when it’s convenient for political reasons, and threaten to jail Wallace’s family unless he cops to “lying.”
Then have Wallace’s lawyers strongly recommend he plead guilty to save his family from jail time, so he decides to plead guilty.
By this time Wallace will be $6m in the hole in legal bills, with no job, career in tatters, and having to sell his house just to stay afloat.
Then have an avalanche of suppressed exculpatory documents come out showing that the entire “investigation” of Chris Wallace was baseless in the first place, making any lies immaterial and not chargeable anyway.
Then have Wallace say in a sworn declaration that “in gods name” that he was actually innocent all along and only plead guilty to help his family, and beg the court for forgiveness, and ask to have his plea back so he can try and clear his name.
Oh, THEN we can have an anchor on Fox News say, in effect that “Gee sucks Chris, but the FBI are tough cookies, and it’s your own fault for lying. Suck it up you chump”.
Talk about an empathy malfunction, geez. Wake up.

Mr. Wallace, it’s time for you to take your act over to MSNBC or CNN, because your utter contempt for President Trump has become too obvious to hide.

More Undercover Huber at The most concerning thing about Crossfire Hurricane and Mueller isn’t anything that we’ve seen in any of these previously hidden documents It’s what we *haven’t* seen that’s the problem. Again with the Sunday talks, sundance, Sunday Talks – Maria Bartiromo Questions Senator Graham: “Why Do You Continue To Do Nothing”?…. As I have said before, Lindsey started talking a better game after John McCain died. I call that Lindsey 2.0, but I'm ready for a Lindsey 3.0 that actually follows through. Then he gets into the weeds with Understanding Why The New York Times, Washington Post, Politico and Buzzfeed Cannot Tell The Truth About Spygate…. Basically, because they've been co-conspirators.

At AmGreat, Roger Kimball wanders around through Coronavirus, Flynn, and Epicureanism


On Flynn, it is clear to me that his case represents a major node in the biggest political scandal this country has ever faced: the coordinated government effort to prevent Donald Trump from becoming president and, when that failed, to delegitimize his administration and remove him from office. Whether Emmet Sullivan, the judge presiding in the Flynn case, sees it that way may be open to doubt.

As Scott Johnson put it at PowerLine, Flynn and his lawyer, the redoubtable Sidney Powell, have “a steep hill to climb with Judge Sullivan.” Still, the public seems mesmerized by the case and several writers, preeminently Andy McCarthy, have been doing yeoman’s work laying out the shocking particulars of the Obama administration’s vendetta against Flynn.

There’s something very 2020 about someone running for office as a Libertarian who vocally backed the findings of a FISA warrant on a private citizen that was illegally obtained by the federal law enforcement arm. https://t.co/nHUFOfWl7H
— Jesse Kelly (@JesseKellyDC) April 29, 2020


FBI General Counsel James Baker had been told that FBI agents discovered between 600,000 and 1 million emails on disgraced former Rep. Anthony Weiner’s laptop relating to Clinton. The 2016 Democratic presidential nominee’s top aide, Huma Abedin, was married to Weiner, who was being investigated for sending illicit texts to an underage girl.
Baker, who left the FBI in May 2018, told author David Rohde that he felt like the “fates had thrown him a hundred-mile-an-hour fastball.”
Baker “believed it was likely that the FBI could find new evidence of wrongdoing by Clinton,” Rohde wrote in his recently released book, In Deep: The FBI, the CIA, and the Truth about America’s “Deep State.”

Baker admitted the FBI had to notify Congress when they reopened the investigation into Clinton. “I thought, ‘What is best for the law enforcement and judicial system?’” Baker said. “I said, ‘I thought the director had an obligation to notify Congress.’ Director Comey agreed with my advice.”

Da Beast whines Trump’s Lawyer Threatens Michael Cohen as He Remains in Jail. Lawyers are paid to keep secrets; that should be true even when they go to jail on unrelated charges. Happy WuFlu Michael.
Posted by Fritz at 10:26 AM