Russiagate: Flynn and Beyond

Matt Margolis, PJ Media speculates as to who actually leaked the Flynn-Kislyak call to media, Who Illegally Leaked the Michael Flynn Call to the Media? Here's Who I'm Betting On, His choices are  Denis McDonough, Obama’s Chief of Staff and Former Vice President Joe Biden. If it's the latter, we'll never know, because he's already forgotten.

The matter of the missing FBI 302 from Peter Strzok and Joe Pientka's attempt to frame Flynn is still drawing attention (and will until it actually appears). Liz Vaughn at Red State lays out how Undercover Huber Chronicles the Extraordinary Actions Taken by Team Mueller to Avoid Turning Over Flynn’s Original 302


In one fact-filled thread, Twitter detective “Undercover Huber” lists the extraordinary measures taken by Team Mueller to prevent this from happening. For ease of reading, I’ve printed the text from the tweets below, but the entire thread can be viewed here.


Flynn’s original FD-302 is so important, the Special Counsel had to leak a prosecution threat against Flynn’s son just to avoid turning it over to his original lawyers Covington.

The Special Counsel refused to turn over Flynn’s original FD-302 both those times. Instead, they schedule a follow up conference call with Covington for the following week and subtly threaten Covington that they might be a fact witness against Flynn for preparing his FARA filings.

Flynn hasn’t pled guilty to anything at this point. His lawyers are adamant he’s *innocent*. And the SCO won’t even turn over the edited FD-302, never mind the original one, for them to look at.
. . .
So back to Fri Nov 3, 2017. The SCO has been asked for the 302, twice. White shoe Covington say their guy is “innocent” of all charges. How do the SCO change the dynamic? They leak to the press that they’re going to charge his son with a felony unless he gives in and plead guilty.

Sun Nov 5, 2017: “Three sources” close to the Flynn investigation leak this to NBC news: “If the elder Flynn is willing to co-operate with investigators in order to help his son, two of sources said, it could also change his own fate, potentially limiting any legal consequences.” . . .


McCarthy told Hegseth what likely happened in Flynn's case is that the agents wrote a draft of a report on January 24 -- the day they conducted the interview -- but the actual "302" was not completed until three weeks later. He noted that texts between agents Peter Strzok and Lisa Page show that Flynn's "302" went through "major revisions and edits."

"So, they looked at [it] and somebody wrote it and they said, 'Gee, we don't like how that came out.' So, one guy edits it and then the next person -- Lisa Page says to Strzok: 'What a piece of garbage you gave me.' And, Strzok says to her, 'You've seen it when I got it,'" he continued. "So, you know, who knows how many iterations there are of this thing?"

"But, whether it's representative of what Flynn said by the end is questionable," he told Hegseth. "And then, the other thing, Pete, that you have to bear in mind is the agents who interviewed him didn't think he lied. So, that's like the cherry on top."

Sundance, McCarthy Discusses When Flynn Was NOT Unmasked and The Missing Pientka 302…

Bonchie at Red State, Andrew McCarthy Lays out Perhaps the Biggest Scandal Involving Michael Flynn and It Could Be Explosive

Unmasking? The Real Story Is When Flynn Was Not Masked in the First Place - my @NRO column: https://t.co/MEIpNRwDIH
— Andy McCarthy (@AndrewCMcCarthy) May 16, 2020


Short answer, Flynn wasn't unmasked because he was not an incidental person captured in the Kislayk connversation; they were already targeting Flynn. Some wishcasting by Vanity Fair (cited at Hot Air), Former Officials: The “Unmasking” List Could Be Bad News For Flynn


“This does not help Flynn,” she told me. “This is a long list of names of people across disparate areas of government who independently felt that the intelligence reports they were reading were so alarming that they needed to know—without knowing, by the way, who it was beforehand—[who] the person was that was engaging in that communication or activity.” 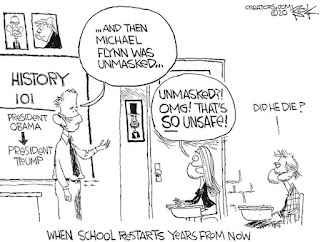 And CNN focuses on Behind the Justice Department's split over the Flynn dismissal. The DOJ is still full of members of "the resistance". Fire 'em all, and save money. Matt Taibbi, Democrats Have Abandoned Civil Liberties


Pundits are cheering. A trio of former law enforcement and judicial officials saluted Sullivan in the Washington Post, chirping, “The Flynn case isn’t over until a judge says it’s over.” Yuppie icon Jeffrey Toobin of CNN and the New Yorker, one of the #Resistance crowd’s favored legal authorities, described Sullivan’s appointment of Judge John Gleeson as “brilliant.” MSNBC legal analyst Glenn Kirschner said Americans owe Sullivan a “debt of gratitude.”

One had to search far and wide to find a non-conservative legal analyst willing to say the obvious, i.e. that Sullivan’s decision was the kind of thing one would expect from a judge in Belarus. George Washington University professor Jonathan Turley was one of the few willing to say Sullivan’s move could “could create a threat of a judicial charge even when prosecutors agree with defendants.”
. . .
Russiagate cases were often two-level offenses: factually bogus or exaggerated, but also indicative of authoritarian practices. Democrats and Democrat-friendly pundits in the last four years have been consistently unable to register objections on either front.

Flynn’s case fit the pattern. We were told his plea was just the “tip of the iceberg” that would “take the trail of Russian collusion” to the “center of the plot,” i.e. Trump. It turned out he had no deeper story to tell. In fact, none of the people prosecutors tossed in jail to get at the Russian “plot” – some little more than bystanders – had anything to share.

Capt Ed at Hot Air agrees  Sullivan, Russiagate, And COVID-19 Reveal Dems And Progressives As “Defenders Of The Spy State” And The Real Authoritarians


Taibbi’s argument is compelling enough, and it should be read in full. Its only real fault is that it doesn’t go far enough to the obvious conclusion, which is that civil rights has never been the point of progressivism. Power is the point of progressivism, and its concern for civil rights has always been a cover for that purpose. That is what makes progressives dangerous to the rule of law and due process, as we have increasingly seen play out before our eyes and about which Taibbi rightly warns. As Democrats have morphed into the Progressive Party, that danger has only increased — and become more and more our reality.

Switching to "Obamagate", Twitchy, ‘Perhaps you should look into it’: Kayleigh McEnany lays a glorious smackdown on media with #ObamaGate facts they’ve been ignoring

"For 3 years you all talked about collusion & there was none. It was a huge injustice, not just to this administration but to the American ppl who deserve truth, not the alleging of absolutely false allegations against @POTUS." pic.twitter.com/ID6Ex47fSd
— The Columbia Bugle 🇺🇸 (@ColumbiaBugle) May 15, 2020

Althouse was not impressed, I'm seeing a lot of adulation of Kayleigh McEnany coming from the right...


... and I thought it was clumsy and nonresponsive. I felt a little embarrassed for her. Later, looking at social media, I saw her extolled by people who, I think, are expressing their real enthusiasm.


While members of the press are frightened of the new press secretary, they do say they anticipate less vicious responses than those of former press secretary Kayleigh McEnany. "Now she scared the daylights out of me," said Jim Acosta. "I'll take the honey badger."

On the badger's off days he will be replaced by a swarm of murder hornets.

Stacey Matthews at LI, Media Mostly Silent After Biden’s Rapid Response Director Calls Reporter Catherine Herridge a ‘Rightwing Hack’. Like we expect better? Matt Vesps at Town Hall notes WSJ Columnist Notes the Obvious Reason Why the Left Goes Ballistic Over Anything AG Barr Does, while the Guardian whines Does the justice department work for the Trump campaign now? Barr thinks so, a case in point.

Roger Kimball at AmGreat, John Brennan and the Plot to Subvert an American Election; Breitbart, Brennan: ‘I Welcome’ Chance to Talk with Durham Investigators – ‘I Have Nothing to Hide’. I'll bet you do.

Earlier today President Trump was again ‘subtle as a brick through a window’ in a tweet requesting the senate get serious in exposing Obamagate and the soft coup effort:

Unfortunately, due to the dynamics of the UniParty, Mitch McConnell is very unlikely to take any action to expose prior misconduct; it would be against McConnell’s interests. . .

Sundance, Acting DNI Ric Grenell Announces Organizational Changes to National Counterterrorism Center (NCTC)… It's hard to imagine it could be for the worse.

A criminal returns to the scene of a crime, and a dog returns to its vomit; Paul Sperry, RCP Transcripts: Clinton Aides Allied With Fusion GPS Pair After Election -- to Re-Push Anti-Trump Dossier 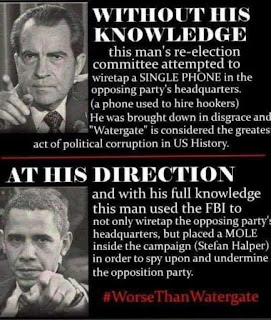 Liz Vaughn at Red State, Dan Bongino Finds Out There’s a Fourth Way the Government Can Spy on a Citizen

Dan asks, “Who tasked the FBI with finding that call?…Who has the power to order the FBI?”


Exception to Court Order Requirement: The President may authorize electronic surveillance to acquire foreign intelligence information for periods of up to one year without a FISC court order where the Attorney General certifies that there is “no substantial likelihood that the surveillance will acquire the contents of any communication to which a U.S. person is a party,” provided the surveillance is directed solely at communications among or between foreign powers, or “the acquisition of technical intelligence…from property or premises under the open and exclusive control of a foreign power.” 50 U.S.C. § 1802.

Oh, the President can authorize electronic surveillance if it is certified by the Attorney General. Did Loretta Lynch certify a warrant to spy on Michael Flynn on behalf of Obama?

Dan rules out the alternative methods of surveillance. There’s no criminal warrant. We’ve learned that this call was not masked to begin with. How else might one conduct surveillance? He says, “What other explanation is there?…He was not unmasked…There were no FISA warrants that we know of on Flynn and the IG report doesn’t indicate there was one. We know there was an active investigation into Flynn…Did Barack Obama order this?”

“This is the most explosive revelation so far…If this is true,” Dan tells his viewers, “and that redacted name is Loretta Lynch on the authority of Barack Obama, Holy Krikes. Abuse of surveillance power directed ordered by the President of the United States on the incoming administration to fabricate a fake narrative used to set up the new President of the United States in an obstruction of justice trap.”

The NewNeo offers The bigger picture on Obamagate, but from Mediaite,  Dan Abrams: Based on All We Know Right Now, ‘This Obamagate Theory Is 100 Percent Bullsh*t’
Posted by Fritz at 9:51 AM