Reason #87 Trump Should be Reelected 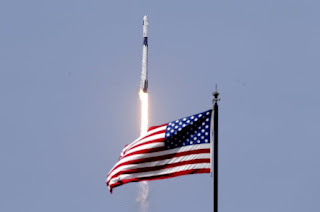 The United States Steps Back Into Space on its Own, SpaceX rocket ship blasts off into orbit with 2 Americans

A rocket ship built by Elon Musk’s SpaceX company thundered away from Earth with two Americans on Saturday, ushering in a new era in commercial space travel and putting the United States back in the business of launching astronauts into orbit from U.S. soil for the first time in nearly a decade.

NASA’s Doug Hurley and Bob Behnken rode skyward aboard a white-and-black, bullet-shaped Dragon capsule on top of a Falcon 9 rocket, lifting off at 3:22 p.m. from the same launch pad used to send Apollo crews to the moon a half-century ago. Minutes later, they slipped safely into orbit. 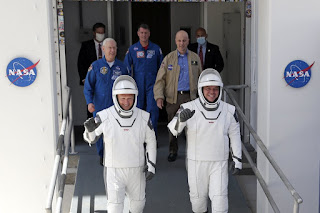 Elon Musk may well be crazy, but we could use a few more people that crazy.

The two men are scheduled to arrive at the International Space Station, 250 miles above Earth, on Sunday to join the three crew members already there. After a stay of up to four months, they will come home with a Right Stuff-style splashdown at sea, something the world hasn’t witnessed since the 1970s. 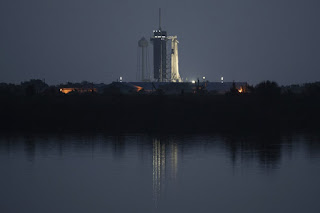 I thought we were going to start landing these things on barges and such?


The mission unfolded amid the gloom of the coronavirus outbreak, which has killed over 100,000 Americans, and racial unrest across the U.S. over the death of George Floyd, a handcuffed black man, at the hands of Minneapolis police. NASA officials and others held out hope the flight would would be lift American spirits.

“Maybe there’s an opportunity here for America to maybe pause and look up and see a bright, shining moment of hope at what the future looks like, that the United States of America can do extraordinary things even in difficult times,” NASA Administrator Jim Bridenstine said before launch. 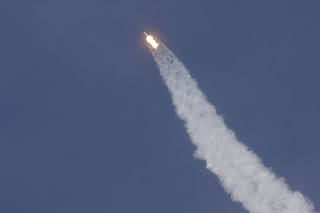 “I’m very proud of the United States. We are back in the game. It’s very satisfying,” he said.

With the on-time liftoff, SpaceX became the first private company to launch people into orbit, a feat achieved previously by only three governments: the U.S., Russia and China.

The flight also ended a nine-year launch drought for NASA. Ever since it retired the space shuttle in 2011, NASA has relied on Russian spaceships launched from Kazakhstan to take U.S. astronauts to and from the space station.

In the intervening years, NASA outsourced the job of designing and building its next generation of spaceships to SpaceX and Boeing, awarding them $7 billion in contracts in a public-private partnership aimed at driving down costs and spurring innovation. Boeing’s spaceship, the Starliner capsule, is not expected to fly astronauts until early 2021.

It's about time. No, it's long past time.

Sundance has links to live stream coverages of the whole 19 hr voyage.
Posted by Fritz at 6:26 PM