I've been accumulating some interesting article regarding the WuFlu, and I thought I'd get them out. I'm not planning on making this a regular thing, but then I'm not planning not to, if you know what I mean.

Liz Vaughn at Red State, New NIH Study: Transmissibility of COVID-19 by Asymptomatic Carriers Is Weak (The full study can be viewed here.). This makes sense. If the disease is largely spread by coughing and sneezing out droplets laden with virus, people without symptoms, for the most part, won't be doing a lot of coughing and sneezing. A large part of science is confirming the obvious.

Time reports that Up to 80% of COVID-19 Infections Are Asymptomatic, a New Case Report Says, but instead of calling this good news, they try to sell the fear.


That’s a particularly important lesson to consider as states reopen and nice weather eats away at many people’s resolve to stay home. The virus can and does spread undetected—and an asymptomatic case can still cause serious illness if it spreads to someone else. Until a vaccine is available, the safest way to keep coronavirus from spreading is to keep your distance from others, whether you’re sick or not.

Karen Townsend at Hot Air,  Fauci: Wearing A Mask Is Symbolic, May Be No Second Wave Of COVID-19. Fauci is OK, but he's a little past his use by date. He's very excited to be part of something big again, after AIDS, but he suffers from the common flaw among scientists of seeing their current problem as the world's most important problem, and wanting everything to be done to satisfy them, to the exclusion of other issues. Despite his advanced age, though, he does seem to be slowly coming around to see that the cure has been pretty hard on people who don't deserve it.

Stacy McCain, COVID-19: The ‘Experts’ Are Clueless. I'm glad he put experts in scare quotes, because, at this point, there are few true experts, and the people who should be aren't often the ones the media.

An interest map from Carpe Diem, the Map of the Day: US counties divided by one-third of COVID deaths 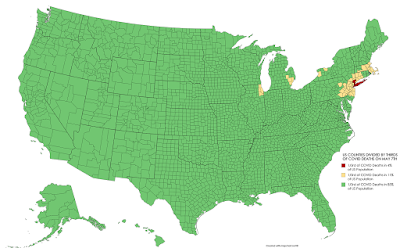 So this really is largely a New York metro area problem.  So, as WaPoo reports, Frustrated and struggling, New Yorkers contemplate abandoning the city they love. Please stay home. Another way to think of it from Pew Coronavirus death toll is heavily concentrated in Democratic congressional districts. A natural fall out from the rural/urban split in American politics with Republicans generally representing more rural interest, and Democrats mostly urban ones. The media is careful to portray this as racism, of course. Fox News, Gingrich on red-state reopenings vs blue-state lockdowns: Will be 'one of the most vivid gaps' in economic history


Former House Speaker Newt Gingrich said on “Fox & Friends” on Tuesday that as states begin to reopen from coronavirus stay-at-home orders, “one of the most vivid gaps in American history” will be seen between the economies of red and blue states.

“In the red states, where you have pro-Trump governors, they're opening up,” Gingrich noted.

Now that we have good testing, there's no reason to keep most of American cowering at home. Get back to work, ya'll!

I missed this MSNBC fail yesterday 😂

Katy Tur tells reporter, "It seems like you might be one of the only people wearing a mask"

Reporter: You can see here, nobody's wearing them. Katy.

Hero bystander: Including the cameraman.

Daniel B. Klein at American Institute of Economic Research, Herd Immunity Is Misleading. I hate being part of the herd. Medical Press, India backs hydroxychloroquine for virus prevention 1,380,000,000 people can't be wrong, can they? Actually, I think "the hydroxy" might be a poor choice for someone in serious condition, on a ventilator with blood clots caused by WuFlu, but I think evidence supports using it with zinc for prophylaxis and mildly symptomatic disease. This will probably mostly be over before we sort that out.

Some bad news regarding one of the vaccine candidates via John Sexton at Hot Air, One Of The People In A Phase 1 Coronavirus Vaccine Trial Had A Serious Reaction To The Dosage

“Then, 12 hours after getting the second injection, I suddenly had severe chills. I decided to go to sleep but woke up in the middle of the night with a fever that was over 103 degrees. I also found I was nauseous, fatigued and had quite a headache,” Haydon told TODAY.

His partner called the 24-hour hotline for the vaccine study and Haydon was advised to go to urgent care…Haydon received intravenous fluids and Tylenol… After leaving urgent care, Haydon went home to rest. His fever rose back to 101 degrees and he had to throw up.

“On my way back to bed I fainted. My girlfriend caught me as I went down and kept me from hitting my head. She woke me up. I remember being confused at the sight of my living room ceiling,” Haydon recalled.

Yikes! I remember whining a lot when the second shingles shot caused my arm to swell and get sore. I'd still get the vaccine, though.

Orange County Register,  Poop tests in sewage might predict coronavirus surge - "The race is on to study wastewater as a possible early warning for COVID-19".   I had a nice article that showed a graph of how WuFlu in crap predicted WuFlu cases a week ahead of time, but I forgot to bookmark it, and Google ain't helping.  The feds should mandate (and pay for) sampling of public sewage for  the WuFlu virus. My guess is it won't happen. It's not sexy enough.

USA Today, Pole dancing and hand sanitizer: Wyoming strip club reopens with 'masks on, clothes off' party. It's good to see things going back to sort of normal. They were never in much danger to begin with. 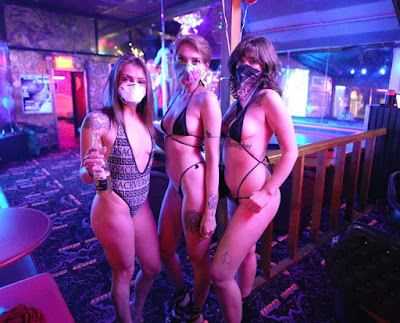 The Wombat has Rule 5 Sunday: Carol Alt out on time and within budget.
Posted by Fritz at 12:14 PM