Russiagate - It's Too Late

To review activity in the Flynn case, for those who may not have paid attention, Jonathan Turley writes that In Michael Flynn case, Judge Sullivan's gross overreach turns justice into mob rule "The case against Micheal Flynn is abusive and should be dismissed, as the Justice Department requests. But Judge Emmet Sullivan has other ideas." WaPoo, Hearing sought in Justice Dept. bid to undo Flynn guilty plea, as nearly 1,000 ex-prosecutors prepare to oppose conviction reversal

Via Wombat's In The Mailbox: 05.18.20, American Thinker, Flynn Judge Ignores SCOTUS & The Constitution Harper Neidig on Da Hill, Former judge to argue against DOJ in Flynn case next month, so barring some intervention by a higher court, via a writ of mandamus or something, Judge Sullivan has protracted Flynn's suffering and financial losses will drag out well into summer. Elad Hakim at AmGreat, Should Flynn’s Team Seek a Writ of Mandamus? Absolutely. Jed Babbin at AmSpec, Rogue Judge Sullivan "There’s no end to the tormenting of Michael Flynn — but a writ of mandamus from the Justice Department should put a stop to it." Sundance, Absolutely Nuts – Court Appointed Amicus Prosecutor Requests: Briefing Schedule, Oral Arguments and Possible Witness Fact-Finding, in Flynn Case…. The new "judge" turned prosecutor wants a whole new trial basically, with the judge substituting for the DOJ. They must really hate Flynn.


This is so far outside the bounds of traditional judicial activity it is unprecedented. In the case against Michael Flynn the court appointed amicus curiae, essentially a court appointed outside lawyer enlisted to prosecute the case despite the DOJ withdrawal motion, John Gleeson has now filed a motion requesting: (1) a briefing schedule, (2) oral arguments; and (3) the possibility of interviewing witnesses.

Within Mr. Gleeson’s motion (link here) he will file his amicus brief on June 10th, and asks Judge Sullivan to set up a briefing schedule and allow him to make oral arguments.

Why would John Gleeson get the chance for a hearing to make an oral argument within the court, yet Flynn’s defense team couldn’t get a hearing scheduled on his original motion to withdraw his plea? This is ridiculous.

In the traditional sense, to the extent that traditional applications can be considered in this bizarre situation, the amicus would present a written briefing to the court for the judge to consider; and that’s it. However, Mr. Gleeson appears to be requesting his amicus status to be elevated to the position of intervening authority where he replaces the prosecution.

The FBI can charge you for lying based on whatever they write down as your words on a piece of paper, and the federal judge meant to protect your rights will think nothing of it when that freedom-hangs-in-balance piece of paper just disappears suddenly https://t.co/Qnv3rCGPXb
— Buck Sexton (@BuckSexton) May 18, 2020

Miranda Devine at NYPo thinks Democrats are exposing themselves in Michael Flynn case, I think they've already been pretty well exposed to anyone who cares to look. Dr. John at Flopping Aces has  little doubt who leaked the Flynn/Kislyak transcript. The name begins with B and ends with A. At Front Page Mag, Lloyd Billingsley compare the Obama administration's treatment of Michael Flynn Versus Nidal Hasan. Guess who they worried about about more? 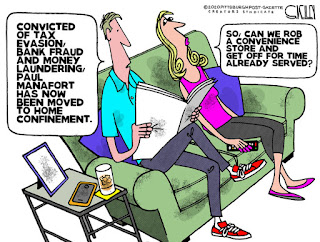 And new yesterday afternoon, AG Bill Barr: “I Don’t Expect Mr. Durham’s Investigation Will Lead to a Criminal Investigation of Either” Obama or Biden…,


Curiously within the statement Bill Barr notes: “what happened to the president during the 2016 election and throughout the first two years of his administration was abhorrent”, within that statement he is now saying the activity by special counsel Mueller was part of the “grave injustice”.

So, apparently "when the president does it, that means that it is not illegal." Devin Nunes at NYPo, How ‘collusion’ conspirators tried to oust President Trump. Janice Shaw Crouse, at AmThink, Unmasking the Illegalities of the Obama Administration and Dan Sobieski at AmThink writes of  Lindsey's Obamaphobia. Still waiting for Lindsey 3.0. Wayne Allen Root at Town Hall has personal experience, Obama and Me: How I Knew Obama Was a Bad Guy Before Anyone Else and sundance has Secondary Confirmation – Treasury Whistleblower Complaint Aligns Directly With President Obama’s Political Surveillance Activity…

Jake Tapper pushed Russia collusion conspiracy theories for years then has the audacity to say showing raw video of Joe Biden being creepy is a "smear campaign." It's incredible.
— Caleb Hull (@CalebJHull) May 17, 2020

Mollie Hemingway at Da Fed, Media Must Report Truth Of Anti-Trump Spy Operation Before It’s Too Late For Them. It's already too late for them to salvage their credibility. They just stopped trying.

The lower chamber majority told the Supreme Court on Monday that they are in the middle of an “ongoing presidential impeachment investigation” that requires redacted information from the grand-jury proceedings that were part of Special Counsel Robert Mueller’s two-and-a-half-year probe.

Since Trump was finally acquitted of two articles of impeachment in February, Democrats have expressed a desire to try again, requesting that the nation’s highest court grant them classified material that they have pledged not to leak under “special protocols.”

“The [House Judiciary] Committee’s investigation did not cease with the conclusion of the impeachment trial,” Democrats wrote to the court. “If this material reveals new evidence supporting the conclusion that President Trump committed impeachable offenses that are not covered by the articles adopted by the House, the committee will proceed accordingly — including, if necessary, by considering whether to recommend new articles of impeachment.”

The focus on information from the Mueller probe comes more than a year after the independent special counsel wrapped up his investigation with unlimited resources that exonerated the president on charges of Russian collusion and obstruction of justice for firing FBI Director James Comey.

Chuck Ross at Da Caller confirms, Former CIA Director John Brennan Says He Is Willing To Meet With Prosecutor Investigating Origins Of Russia Probe. The fact that he hasn't yet suggests he may be target.