. . . Jeopardy. Last night we got breaking news that Judge Sullivan had denied the DOJ's request to dismiss the case against Gen. Flynn, and had asked for amicus curae briefs from interested parties. Ace has the proper level of outrage: Corrupt Judge Sullivan, Who Previously Threatened to Jail Michael Flynn for Treason When He Moved to Withdraw His Guilty Plea, Now Invites Leftwingers Who Want Flynn Jailed To Submit Their Own Motions As To Why Flynn Should Still Be Sentenced.

Sullivan is saying that there is no actual real court case here because there are not opposing parties in the action -- he is claiming that Barr, due to politics, is on Flynn's side, and you can't have a court hearing with two parties who agree. You need to bring in other parties -- through the amicus curae ("friend of the court") process.

And he's inviting Adam Schiff to file an amicus brief and become, in essence, the actual party opposed to Flynn.

Because Barr is -- there is no way around this insinuation -- is corrupt and his filings must be ignored by the court as rigged or fraudulent.

I suppose a less dramatic reading would be, "Sullivan sees that Flynn and the DOJ both agree that no crime has been committed here, and, for the sake of due diligence, is seeking out a third party who disagrees to give the court a dissenting view."

More at WaPoo, Law and Crime and NBC. Just incidentally, I have heard, although I cannot confirm, that the US Supreme Court recently rejected a lower courts efforts to get amicus curae briefs in a criminal trial 9-0. I can't trust google to find news anymore. Wait, here it is, United States v. Sineneng-Smith, thanks to a commenter at Alhouse.

Judge Emmet G. Sullivan just signaled he’s not interested in the law, due process, equal rights, or justice. He already called Flynn a traitor in open court, and now he’s going to invite left-wing lawyers write his final order against Flynn for him. https://t.co/UFO7ZEn74u
— Sean Davis (@seanmdav) May 12, 2020 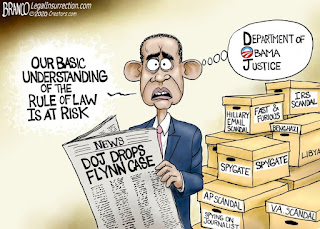 
Now the purpose of the leaked conference call, aka instructions, from former President Barack Obama come into play. In a very unusual move today Michael Flynn’s judge, Emmet Sullivan, enters an order granting outside parties the time to enter amicus briefs (friend of the court) to assist in guiding the court; a briefing schedule to follow.

It looks like the judge wants to give former DOJ employees (2,000 signatures on letter) an opportunity to publicly undermine and undercut the position of the DOJ in moving to dismiss the charges. Infuriating, remarkable and transparently political.

As one might expect, Flynn and his lawyer, Sidney Powell are staunchly opposed. Bonchie at Red State,  Sidney Powell Lights Up Judge Sullivan’s Political Nonsense In Flynn Case and sundance, Flynn Defense Files Motion in Opposition to Amicus Briefs… A copy of the 3-page brief is there, while "Shipwreckedcrew" at Red State details how Judge Emmet Sullivan Likely Committed Reversible Error In Taking The Guilty Plea of General Michael Flynn. Warning, lawyerly writing within. 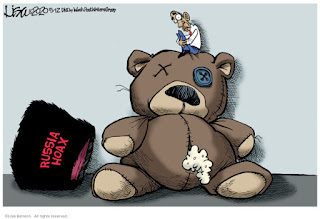 Meanwhile, fromFox, Grenell declassifies names of Obama officials who ‘unmasked’ Flynn and Chuck Ross at Da Caller, Grenell Has Declassified List Of Obama Officials Who Unmasked Michael Flynn, but sundance warns Prepare to Discover That Michael Flynn WAS NOT Unmasked – But Everyone Else Was… "Flynn was not “unmasked”, because he was the direct target." Also, ABC Report – DOJ Official: “We Do Not Intend To Release The Unmasking List” – The Documents are a DNI Equity… So it appears likely that what Grenell is doing is giving the evidence to the DOJ for use in the Durham investigations.

She added that when she and Flynn met with Obama’s national security adviser, Susan Rice, during the transition before Trump took office, there was a “glaring omission” as the subject of any Russia investigation was not discussed.

Brooke Singman at Fox, Rand Paul, citing Flynn case, proposes FISA amendment to curb surveillance of Americans. Unfortunately, he probably doesn't have the support in the Senate, and certainly doesn't in the House. 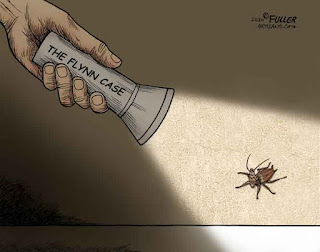 Andy McCarthy on Da Hill, Why dismiss the Flynn case? Because the FBI can't prove it. Sure, I'd love to see it tried in court, and put McCabe, Strzok, Pientka, Comey and Brennan on the stand. But that ain't gonna happen. The current arguement is about whether they can go ahead and sentence him on the the guilty plea that they coerced out him "fair and square."

And then there's Slow Joe, via Ace, Joey Sneakyfingers Biden: No, I Had No Idea About Any Investigations Into Michael Flynn. - Wait, You Have Evidence I Was Present at Obama's "By the Book" Meeting? - Oh, Right. I Meant To Say I Didn't Know Anything About a Prosecution.  NewsBusters, Biden Struggles With Flynn Questions on ABC, Barely Asked About Reade. NYPo, Joe Biden denies he was involved in Michael Flynn probe and Tyler O'Neil at PJ, Joe Biden Refuses to Answer Questions About Meeting at Center of Obamagate, Mike Flynn Abuses. Joe can barely remember what happened yesterday. It's elder abuse to run him for Preznit.

Sundance, DOJ Spokesperson Kerri Kupec: “What Happened to Candidate Trump Was One of The Greatest Political Injustices in History”…


It is not conspiracy-mongering to note that the investigation into Trump was predicated on an opposition-research document filled with fabulism and, most likely, Russian disinformation. We know the DOJ withheld contradictory evidence when it began spying on those in Trump’s orbit. We have proof that many of the relevant FISA-warrant applications — almost every one of them, actually — were based on “fabricated” evidence or riddled with errors. We know that members of the Obama administration, who had no genuine role in counterintelligence operations, repeatedly unmasked Trump’s allies. And we now know that, despite a dearth of evidence, the FBI railroaded Michael Flynn into a guilty plea so it could keep the investigation going.

CNS News, Actor James Woods: #ObamaGate ‘Will be a Footnote to History’ Due to GOP #GutlessBlowhards. And more outcomes from Grenell's release of the House transcripts, from Matt Margolis at PJ, Uh-Oh. Podesta Says Hillary Knew About Trump Oppo Research That Ended Up in Steele Dossier. Somebody should ask her. Jed Babbin at AmSpec, Crossfire Hurricane, Mueller, and Schiff: Three Acts of the Deep State Play. Brian Joohdeph at AmThink, Will There Be an Obamagate Reckoning? You Betcha!. I wish I were as sanguine. 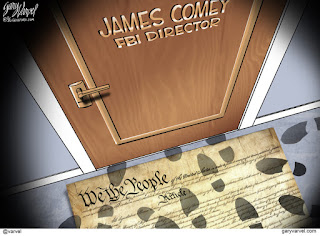 I posted the video yesterday, but Ace, Tucker Carlson Grills Deep State Simp Trey Gowdy for Either Being Too Cowardly to Push Back Against the Coup, Or Being a Covert Active Participant "My mistake was relying on the word of the FBI," he says. - Mistake, singular. Given that the FBI is now proven to have acted corruptly and lawlessly throughout this -- well, that's sort of a big mistake, isn't it, Deep State Simp?"Virginia Kruta at Da Caller, ‘My Mistake Was Relying On The Word Of The FBI’: Trey Gowdy Explains What He Did Wrong In Russia Probe. Also, Surprise! Deep State Aligned "Republican" Senators Once Again Refuse to Dig Into Obamagate "Miss Lindsey says that Obama cannot, will not, must not be called to testify. But Miss Lindsey sure will give 'im hell on Fox & Friends, where it counts!!!". Robert Shebly at Insty, SQUARING THE CIRCLE ON THE HOUSE GOP’S DEFENSE OF THE FBI:


Tucker Carlson’s pointed questioning of Trey Gowdy last night has a lot of people asking why he and others defended the FBI and intelligence agencies when it now appears they knew there was no “there” there with regard to collusion, Gen. Flynn, etc., suggesting that they were secretly happy to get rid of President Trump. I suggest that, in light of the unaccountable powers these agencies wield now, the historical abuses in which such secret agencies around the world have traditionally engaged, and Sen. Schumer’s famous remark that “you take on the intelligence community — they have six ways from Sunday at getting back at you,” we can’t rule out the possibility that some members of Congress didn’t feel like they had a choice.

Paul Bedard at WaEx gives us Sessions letter: ‘Dishonorable’ to criticize Trump despite firing, explains ‘recusal’ I think Sessions was a good man promoted above his level of competency.

And something new from Ace, also via Rick Grenell's release, Report: John Brennan Used Private Contractors to Unmask Trump Officials Because Official Government Employees Are Required to File a Report When They Unmask US Citizens "This is criminal."

Contractors working for Brennan were gathering the intel. For someone to be unmasked it had to be in an intel report. That’s how they got around the law.
— Adam Housley (@adamhousley) May 12, 2020 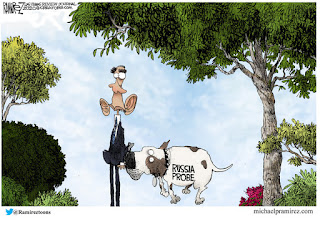 Jazz Shaw at Hot Air reports Sorry, not sorry, NBC News: Hey, Sorry About Butchering That Bill Barr Video. Sorry they didn't get away with it. But Sister Toldjah at Red State dug into it and may have found  Where Chuck Todd May Have Gotten His Deceptive Info on Barr’s CBS Interview Is the Bigger Scandal


But my suspicions revolve around a few high-profile liberal Twitter accounts that shared the video clip after the Thursday Barr interview but that also cut off Barr’s quote in their text write-ups of what he said. Here are two of them . . .

NBC owes the viewers more than just cut an pasting crap from the left wing without checking.
Posted by Fritz at 10:35 AM