To review,  Court of Appeals Asks Judge Emmet Sullivan To Explain... 👨🏾‍⚖️🤯⚖️ (EBL). Andrea Widburg at AmThink notes how In the Flynn case, the DC Circuit Court of Appeals issues a surprising order, Ace, Appellate Court Lawyer: Of All The Options the DC Court of Appeals Could Have Chosen in the Emmet Sullivan Matter, It Chose "The Most Extreme, Rare, and Drastic" of Them. and in a twitter thread, John M. Reeves explains in exquisite detail why    The wording of the DC Circuit's order directing Judge Sullivan to personally respond to @SidneyPowell1's writ shows it is deeply troubled by Judge Sullivan's actions. Andy McCarthy chimes in from NR, D.C. Circuit Orders Judge Sullivan to Respond to Flynn Mandamus Petition. 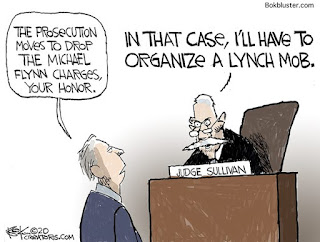 
The one thing none of these stories give a hint about is why now? What exactly was it that prompted Director Wray to launch this review today? Just a couple of weeks ago Politico reported that Republicans were frustrated with Wray’s response to the Flynn case
. . .
So there was mounting pressure on Wray to “take some action.” This review might be a response to that criticism.

While this review isn’t directly part of the ongoing court battle over the dismissal of Flynn’s case, it does seem as if the FBI is issuing a clear signal that it considers the case over. Notice that third paragraph above: “Director Wray authorized this additional level of review now that the Department of Justice, through Mr. Jensen’s work, has developed sufficient information to determine how to proceed in the Flynn case.” Director Wray is essentially saying, now that we know the Flynn case was a mistake it’s time to find out who made the errors so it doesn’t happen again. Bottom line: Even if Judge Sullivan refuses to take the hint, the FBI is joining the DOJ in treating the Flynn case as a blunder.

The only FBI name I know involved who's still there lurking around somewhere in Joe Pientka, Strzok's partner in interviewing Flynn, and nominal author of the missing 302. Sundance at CTH, Wray Reversal – FBI Launches Internal Investigation Surrounding FBI Conduct in Flynn Case…


This is an interesting development considering this same FBI Director previously claimed the office of inspector general found no intentional wrongdoing by people within the FBI; and Wray further asserted there was “no evidence of political bias” after each of three OIG investigations completed in 2018 and 2019.

If the OIG did not find FBI wrongdoing, then what changed? Why is FBI Director Chris Wray now launching an internal investigation? The answer appears to be an outsider’s investigation via Missouri U.S. Attorney, Jeff Jensen.

The inspection division (INSD) previously reviewed FBI conduct and reported to Office of Inspector General Michael Horowitz. The resulting IG findings of FBI conduct was carefully worded and disingenuous at best, but it was embraced by FBI Director Wray.

Now the outsider review by US Attorney Jeff Jensen; combined with the simultaneous declassification of documents by DNI Ric Grenell; appears to be highlighting a lot more internal FBI corruption. Hence this unavoidable shift in tone from Wray.

At Da Signal, Hans von Spakovsky wonders Why Didn’t the FBI Record the Flynn Interview?. FBI policy. Taking notes and summarizing the interview allows them to shape the conversation in a favorable (to them) way. Wray should eliminate the policy, and require recording the interview immediately. Speaking of which, sundance wonders if Should We Prepare to Discover The FBI Never Officially Used The Kislyak-Flynn Transcript?… and used a "summary" instead? Hmm.


So why is Susan Rice advocating for the release of the transcript? Here’s where things get interesting…

Remember, the objective of Susan Rice and her lawyer, former White House counsel and Obama ‘fixer’ Kathryn Ruemmler, is to protect President Obama and the former administration. Obama, Rice and Ruemmler know the transcript angle is a nothing-burger; however, the transcript does one thing very clearly…. It puts the burden of consequence for the use of the transcript squarely on former FBI Director James Comey.

I suspect, very heavily, Susan Rice is requesting release of full transcript because she knows it was non-existent to the Obama White House. That fact puts more distance between Obama and Comey; and that paints the FBI operation against Flynn as rogue. The distance here was/is ongoing goal. 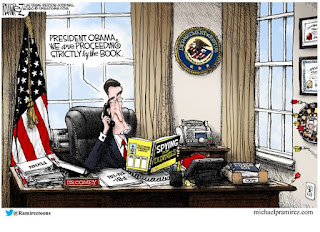 From Greg Jarrett's shop KT McFarland: Rice Email Was a ‘Cover Your A**’ Memorandum
“It was a C-Y-A Memorandum because she knew they had done something very wrong and I think she assumed that people would come looking.”. Well, we already know it was Obama's counsel who told her to write it, so consider whose ass is being covered.

Temporarily but  still DNI Ric Grenell Declassifying Flynn-Kislyak Transcripts: “The IC doesn’t have all the transcripts/summaries….it wasn’t our product”… (sundance). OK, so whose was it?

The implication here is the U.S. Intelligence Community (IC) did not generate one of the transcripts; that evolved into an FBI equity, and was later used in their case against Lt. General Michael Flynn. The December 29, 2016, intercept was not exclusive to the U.S. intelligence apparatus, and the call summary became proprietary to the FBI; the agency exploiting the underlying content.

This makes sense and explains how the FBI was able to manipulate the framework of the call and keep the remaining U.S. intelligence system away from their internal plan.


Did you note the part where the FBI told Gowdy some of the Flynn phone calls were “not captured”?  Wouldn’t it be a very convenient framework if the FBI was going to summarize one of those non-captured calls into a “CR cut.”

FBI: “Oh, sorry, we don’t have the actual transcript, but we do have a summary of what we interpreted that call content to be.”  Huh, funny that. 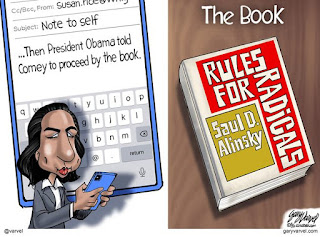 Eli Lake at Commentary, The Railroading of Michael Flynn - How it happened and why it matters. Paywalled, but Bonchie at Red State purports to know The Reason Why Barack Obama Targeted Michael Flynn Goes Well Past Petty Politics


"For Barack Obama the purpose of Russiagate was simple and direct—to protect the Iran deal. He saw Michael Flynn as a signal threat to that legacy. Obama had to stop Flynn."

"Adam Mill" at AmGreat, The Flynn Saga Seems Too Complex? Read This. "The proponents of Michael Flynn’s persecution aren’t fighting for justice. They’re fighting to keep their weapon."


Let us then convene the court of kindergarten to make relatable some of the many injustices committed by the government in the Flynn case.

It’s not fair to interrogate somebody over something that’s not prohibited.

While many repeat the talking point, “Flynn lied to the FBI,” few have gone back to review what it is he’s accused of having lied about. Flynn is accused of lying about asking other countries how they planned to vote on an Egyptian-sponsored proposed U.N. resolution condemning certain Israeli settlements. Why was the FBI asking about that? He’s also accused of lying about asking Russia not to escalate the situation in response to sanctions imposed by the United States on Russia.

Again, why is the FBI trying to criminalize that?

The FBI should not have been asking him about these phone calls. The elected incoming president had every right to authorize Flynn to begin reaching out to other leaders. It was part of the peaceful transfer of power from the Obama Administration to the Trump Administration. The FBI’s interrogation of Flynn was just part of a greater effort to disrupt this constitutional process.

In kindergarten, this would be the equivalent of getting questioned by a teacher over associating with or talking to a student the teacher didn’t like. Even a kindergartener would realize the unfairness of a teacher using her authority to interrogate him over a perfectly appropriate conversation with another child.

The Justice Department finally admitted that the January 24, 2017 Flynn/FBI interview “was untethered to, and unjustified by, the FBI’s counterintelligence investigation into Mr. Flynn . . . and therefore does not believe Mr. Flynn’s statements were material even if untrue.” . . .

John Davidson at Da Fed, How The Obama Administration Weaponized Surveillance Laws To Target Trump. Pretty much every way they could think of. George Neumayr at AmSpec, Playing Dumb About Obamagate - Liberalism sanitizes its scandals. Chrissy Clark at Da Fed, Jake Tapper Calls Obamagate ‘Crackpot Conspiracy Theory.’ Here’s 10 Times He Promoted The Trump-Russia Conspiracy. Only 10? Try harder. Adam Ellwanger at AmGreat, It Won’t Matter What Obama Knew (or When He Knew It) - "If damning evidence does come to light, do you really think the former president will be held accountable?" Nope, reform only happens after Republicans imitate Democrats and do something bad. Virginia Kruta, Press Secretary Kayleigh McEnany Turns Briefing On Its Head, Demands Answers From The Press, Heavy, WATCH: Kayleigh McEnany Berates Press for Not Asking About Obamagate. She's great.

Breitbart, McConnell on Senate ‘Obamagate’ Inquiry: After Impeachment, Pelosi Is Not in a Position to Lecture Us on ‘Appropriate Use of Time’ Smack! At WaEx, Byron York notes the hypocrisy of Democrats accusing Republicans of using investigations for political purposes, also, Impeachment, continued: The Mueller wars goes on and on.

Matt Vespa at Town Hall, thinks That Dirty Trick Used Against Paul Manafort Should Lead to a Full Investigation of the Mueller Probe. There are a lot of reasons to investigate the investigators.

Linked at Pirate's Cove in the weekly Sorta Blogless Sunday Pinup and linkfest.
Posted by Fritz at 10:58 AM