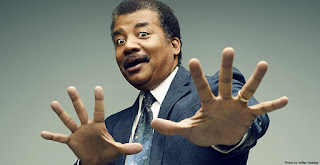 
You may know Neil deGrasse Tyson from the PBS series Nova, the Fox series Cosmos and the National Geographic series Star Talk. However, now Tyson is starring in a new series called The Astrophysicist Who (Allegedly) Raped Me, co-starring Tchiya Amet, who says he raped her when they were both graduate students at the University of Texas.


This week, two other women have come forward to make their own accusations against Tyson: Bucknell Professor Katelyn Allers, who says Tyson groped her at a party in 2009, and Ashley Watson, who says she quit her job as Tyson’s assistant because of “his inappropriate sexual advances.” Watson says Tyson has “predatory tendencies” and made “misogynistic comments.” So now I guess his career will implode like N6946-BH1.

I'm not a great fan of Tyson's, nor was I a great fan of his predecessor in popularizing science, Carl Sagan. Both used their fame and notoriety to advocate for polices well outside their fields of expertise. Most recently, Tyson was seen saying we should believe that Catastrophic Global Warming advocates because scientists could land a probe on mars.  If rocket scientist had the same accuracy as the climate modelers, it could have just as easily fallen into the sun or escaped the solar system.

But, we should at least afford him the presumption of innocence. These charges come from a while ago, and all from women who seem to have designs on his position as popularizers of science (although none really seem to have the chops) as well a feminist leanings.

If true, at best his taste is inconsistent.

Wombat-socho has Rule 5 Sunday: Babe In Toyland and FMJRA 2.0: Jungle Love out on time at The Other McCain (shouldn't that be the remaining McCain?).
Posted by Fritz at 10:07 AM