The Red Menace In the Chesapeake? 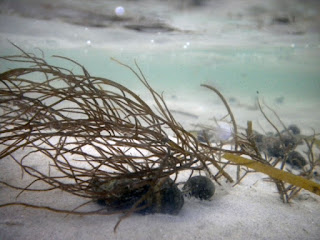 Is nonnative red alga a friend or foe? It all depends…

Any newcomer takes time to size up. And when one makes its entrance as slowly and subtly as Gracilaria vermiculophylla — a red alga native to the Pacific — did in the Chesapeake Bay, it can be even harder to determine whether its introduction will be helpful or harmful.

Today, as Gracilaria has become widespread in Virginia waters, questions continue to swirl around it. Scientists disagree over when the species came to the Bay, how it arrived and what its proper name should be. (In November, one group published a paper in the journal Phytotaxa proposing that it be reclassified as Agarophyton vermiculophyllum.) But even more significantly, scientists are wrestling with the thorny question of whether Gracilaria will prove a net positive or negative for the estuary.

“It’s changing these habitats pretty fundamentally, and we don’t understand the ecological or evolutionary impacts,” said Stacy Krueger-Hadfield, a scientist at the University of Alabama at Birmingham who has studied its presence in the Bay.

According to Virginia Institute of Marine Science Professor Romuald Lipcius, Gracilaria has been found in the Chesapeake as far north as Smith and Tangier islands and as far south as Virginia’s Lower Peninsula. It has also spread midway up all of Virginia’s rivers.
“I see that Gracilaria is actually here to stay,” he said. “If anything, it could increase some more, but I think it’s at a pretty high abundance right now, and I don’t see that it’s going to decline.”

In much of the existing scientific literature, Gracilaria is said to have been introduced to the Bay in the late 1990s or early 2000s, although new work drawing on Eastern Shore herbariums by Krueger-Hadfield pinpoints its emergence to the 1970s, when she suspects it was brought in accidentally with oysters from three main sites in Japan.

“I honestly don’t know how fast it’s spreading, because I think it’s been in places a lot longer than we’re aware [of],” she said.


I think I dragged some up on a lure down in the islands near Smith Island and Tangier on a fishing trip this year. I wish I'd kept a photo, but I watch more carefully now.


For some, the introduction of the macroalga has caused dismay. Beginning in the late 2000s, watermen around Tangier Island informed the Chesapeake Bay Foundation that they were seeing increasing masses of what they called “red moss” sometimes entangled in underwater grass beds. Locals also reported that those areas often seemed to have fewer crabs than others.

That’s possible, said Lipcius: “In certain areas — for instance, in very protected coves and where there’s little water flow — Gracilaria tends to bunch up.” In these regions, where it can reach a thickness of 2 feet, the macroalgae block sunlight from reaching the seagrass below, leading to a die-off. That, in turn, can lead to declines in other aquatic populations such as blue crabs, which rely on these plants for both protection and the habitat they offer to species lower on the food chain.

While Gracilaria may pose a threat to the local ecosystem in areas where waters are slow or still, the alga appears to be having an unexpectedly positive effect in areas of the Bay where the water flow is more rapid, assuming the role previously played in many areas of the Bay by underwater grasses.

In those places, where there is less of a tendency for the plant to bunch up and block sunlight, Lipcius said, “Gracilaria is about equivalent to seagrass as a nursery habitat.”

One of Virginia’s foremost experts on the blue crab, Lipcius has been studying the effects of Gracilaria on this economically and ecologically significant species for the past decade. Ultimately, he has found that Gracilaria “has definitely played a role” in blue crab restoration and “may actually be keeping the population from declining.”

In the past, juvenile crabs relied on seagrass beds for both protection and a source of food. As declines in the Bay’s water quality led to great losses of these grasses (in 2008, the Chesapeake Bay Foundation estimated that half of the estuary’s eelgrass had died since the 1970s), blue crabs were deprived of critical habitat, and their numbers also tanked.

Since then, improved water quality and restoration efforts have led to the regrowth of tens of thousands of acres of Bay grasses, reaching an estimated 105,000 acres in 2017. But rising temperatures from climate change may reverse some of those gains. Lipcius said that he believes that one key species, eelgrass “is likely to be extirpated” because of its difficulty surviving at sustained temperatures above 86 F (30 C); the more adaptable Gracilaria, which can thrive in temperate to subtropical temperatures, “could compensate for the loss of eelgrass to a large degree,” he said.

Furthermore, Gracilaria has shown the ability to thrive in areas where seagrass has never grown — not just compensating for seagrass loss, Lipcius pointed out, but creating new areas where small crustaceans and other species can flourish.

We don't have many species of seaweed in our end of the Bay; it's just too fresh for most. We do get some heavy blooms of Ulva, a  green algae, that are edible in a pinch (as is Gracilaria).
Posted by Fritz at 6:46 PM