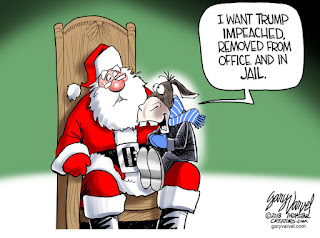 Another full day. Let's start with impeachment madness. We didn't really need this WaT article to tell us Liberal Media Scream: Together now, networks preach 'impeachment’. Front Page mag: Trump-Haters Smell Blood Over Cohen's Charges. Via Womabat-socho's In The Mailbox: 12.11.18, Hinderacker at Powerline, It's Only Fair: Let’s Prosecute Google For Illegal Campaign Contributions for their pro-Hillary campaign boosts. AP: Some Trump allies starting to worry about investigations. I don't worry about the truth, but I worry about an unequal application of "justice." To wit: Nadler: We Might Extend The Statute Of Limitations On Some Crimes So That Trump Can Be Prosecuted After Leaving Office. Note that the statute of limitation has expired on Obama's campaign violations, but probably not Hillary's. Jim Acosta at CNN so you know it's not biased: Trump concerned about being impeached, sees it as a 'real possibility,' source says

AllahPundit, Orrin Hatch: I Don’t Care If Federal Prosecutors Think Trump Committed A Crime CNS News, Sen. Rand Paul: Special Prosecutors ‘Find a Person, and They Look for a Crime’. Show me the man, and I'll find the crime.


Mueller omitted the fact that Cohen did not have any direct points of contact at the Kremlin, and had resorted to sending the emails to Vladimir Putin’s general press mailbox. Sources who have seen this omitted information say it undercuts the idea of a “back channel” and thus the special counsel’s collusion case.

It quotes an August 2017 letter from Cohen to the Senate intelligence committee in which he states that Trump “was never in contact with anyone about this [Moscow Project] proposal other than me.”

This section of Cohen’s written testimony, unlike other parts, is not disputed as false by Mueller.

Also notable: Mueller did not challenge Cohen’s statement that he “ultimately determined that the proposal was not feasible and never agreed to make a trip to Russia.” 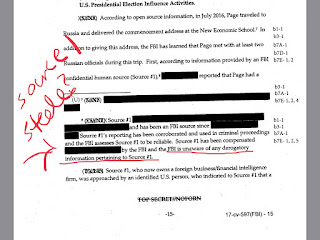 and It’s Official: Now There Is Proof Corrupt and Fired Former FBI Director James Comey Lied to the FISA Court to Spy on Candidate Trump. But that's different because. Just because.


Officials familiar with the case said the proof is in the lack of evidence in the 25 pages of court papers Mueller has filed on Cohen over the past two weeks. The alleged Prague visit is not evident in the plea agreement, the criminal information statement or the sentencing memorandum, none of which contain redactions.

In fact, language in the filings strongly indicates prosecutors have not found evidence to authenticate the Prague rumor, according to people familiar with the case, who spoke on the condition of anonymity to discuss sensitive information.

To be fair, Comey did call the Steele Dossier "salacious and unverified", but he did sign a FISA warrant based on it anyway. Althouse, His mind exploded.

James Comey just totally exposed his partisan stance by urging his fellow Democrats to take back the White House in 2020. In other words, he is and has been a Democrat. Comey had no right heading the FBI at any time, but especially after his mind exploded!
— Donald J. Trump (@realDonaldTrump) December 11, 2018 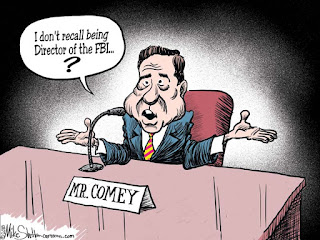 Mind blown. Donald does that to his enemies. CNS News: Comey Says He Can’t ‘Interpret’ What Strzok Meant When He Said ‘Hillary Should Win 100,000,000 to 0’. To be fair, Comey said a lot of evasive and probably untruthful things in his Congressional testimony. WSJ: The Unbelievable James Comey. Fox's Laura Ingraham: James Comey's convenient memory loss and the search for answers


When asked if he could recall who wrote the “initiation document” for the Russia probe in July of 2016, Comey had no recollection. He also claimed to have no knowledge of the involvement of Peter Strzok. He’s the FBI investigator who led the Clinton email probe whose texts to girlfriend Lisa Page included gems like this: "Trump’s abysmal, hoping people will just dump him."

Similarly, he could remember anything about the British spy, Christopher Steele, passing his dossier along to Justice Department official Bruce Ohr. It was Ohr who forwarded it to the FBI, sparking the surveillance of Trump Campaign figures. Remember Carter Page, Trump’s campaign adviser?

But the few details that Comey had clarity on raise important questions. He told Congress that the details of the Steele dossier were "unverified" when they were used by the FBI to secure surveillance warrants of Carter Page. Now remember, that’s what started this entire Trump-Russia probe. Comey also maintained that it was “not necessary” for the FBI to validate the sources of the dossier. With questions outstanding, Comey will be further grilled by Congress.

Much ado about not very much, Ace: Google CEO: After an Extensive Investigation, We Have Determined That the Russian Campaign Against the Very Foundations of Our Democracy Spent... Four Thousand, Seven Hundred Dollars on Ads. Total.


Well. Let's do what the leftwingers and cuck neocons want and drop a few Unscheduled Sunrise bombs on Moscow then, huh?

Russia spent as much money on ads to "compromise" our election as the average teenager spends on a used scooter. 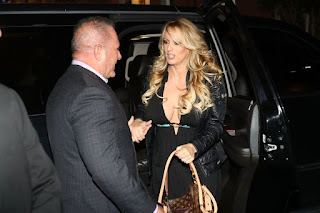 In the Department of There Is Some Justice After All, AllahPundit: Federal Judge: Stormy Daniels Owes Trump $293,000 In Attorney’s Fees


She and Avenatti sued Trump for allegedly defaming her in a tweet, you may remember. They lost — and not only did they lose, the court found that the suit violated Texas’s anti-SLAPP statute, which punishes a litigant for filing a frivolous complaint aimed at discouraging criticism by the defendant. That punishment: Attorney’s fees. Trump and his lawyer, Charles Harder, asked for $340,000 from Daniels to compensate Harder for his work on the case, but the court was free to conclude that that amount is excessive and should be scaled waaaaaay back.

Judge James Otero issued his ruling this afternoon. Harder’s getting nearly three-quarters of his fees.


This is a wompening of an order of magnitude unprecedented.

The Wombat has Rule 5 Sunday: Eliza Dushku and FMJRA 2.0: Distant Smile up at The Other McCain.
Posted by Fritz at 8:48 AM