Russiagate: Stuck in Prague With Those Dossier Blues Again

The reporters who broke a potentially bombshell story claiming evidence that Michael Cohen visited Prague during the 2016 presidential campaign did not see for themselves some of the underlying intelligence cited in their report, one of the journalists who wrote the story revealed Thursday.

In an interview on MSNBC, Greg Gordon said that he and his McClatchy colleague, Peter Stone, did not physically see cell tower records and intelligence intercepts that they claim placed Cohen in Prague in summer 2016.

Gordon also suggested that the four anonymous sources he and Stone cite in their article also did not see the intelligence for themselves, meaning that the report is based on third-hand information.

“Is there anything that you were able to physically see for yourselves?” MSNBC host Joy Reid asked Gordon.

“I wish we had. We held out for a while for that, and it came a time when we thought we had a critical mass. It is a competitive business,” Gordon said.

When asked if he has seen the intercepts, Gordon responded, “No.”

He said that his sources were told that the intercepts exist.

Da Spectator: The Prague delusion - The Central European city is the last stop for the resistance fantasy


Many months ago, when Michael Cohen first came to the attention of CNN, Bill Kristol, and other acolytes in the anti-Trump sorority, a rumor was floated that he had been in Prague in 2016 and had spoken to unnamed but highly placed ‘Russians’ either to hand over the US government to Vladimir Putin or to assure Putin’s connivance in making Donald Trump President.

A notable flaw in this theory was that Michael Cohen had never visited Prague, not then, not ever.

If you think that is a disabling flaw, however, you do not appreciate the robust goad to invention that hysteria provides. That fact that Michael Cohen has been shown not to have been in Prague is merely a fact. What is that against the ardent heart’s desire to Get Trump and cancel the effects of the 2016 election?


First, to cut to the chase, the case I made in April 2018 applies here. This information cannot be from the source you immediately imagine — i.e., a U.S. intelligence agency tracking Michael Cohen’s communications — if it comes with only a general timeframe and not exact dates of detection. Nor could it come directly from any other credible source; e.g., British GCHQ, another European intelligence agency, the police in Prague. It isn’t possible to detect Michael Cohen’s cell phone interacting with microwave towers in Prague and not have a time-hack.

All of which leads Tom Maguire at Just One Minute to come up with the same theory I had a couple of days ago in Stuck In Prague:


Suppose Russian Intelligence decided to exploit Hillary's paranoia and opportunism by spoofing a meeting with Cohen, hoping to spark a Obama-approved investigation of his political opposition with resulting finger-pointing, division, and de-legitimization. Mission Accomplished! 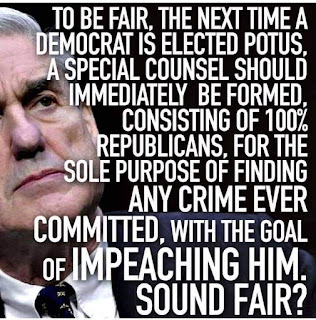 Ed Morrissey at Hot Air: Hmmm: Mueller Files Early Response On Magical Mystery Subpoena. Apparently the Mueller team did not appreciate the Court putting a stop to one of their coercion tactics.


Will the Supreme Court issue a ruling on Robert Mueller’s magical mystery subpoena before the ball drops in Times Square on Monday night? Politico’s Josh Gerstein reports that the government got its response submitted to the court three full days ahead of an expedited deadline, although it might not have come directly from Mueller. The seal on the case is so encompassing that it’s tough to tell the players without a scorecard … and a decoder ring
. . .
Unfortunately, whoever submitted the response to the challenge requested that the case remain under seal. That means we won’t get a chance to find out the identity of the subpoena target nor the reason for Mueller’s interest at least until the Supreme Court decides the matter. We won’t even know if this part of the case features any nude selfies, although that may be for the best depending on who got targeted for that picture.


Federal and state investigators are scrutinizing the employment documents of immigrants without legal status who allegedly worked at President Donald Trump's golf club in New Jersey, according to their attorney.

Anibal Romero, a Newark attorney who represents five undocumented immigrants who say they worked at the Trump National Golf Club in Bedminster, said in an interview Saturday that he met with investigators from the New Jersey state attorney general's office and two FBI agents in November, before the workers began to go public with their stories.

Romero said he turned over fake green cards and Social Security numbers that supervisors at the golf club allegedly gave one of his clients, Victorina Morales, a 44-year-old Guatemalan national. He also gave investigators the pay stubs of Sandra Diaz, a Costa Rican native who now has legal status but said she was undocumented when she worked at the club for three years.


The FBI agents told him they would "coordinate" with the New Jersey state attorney general's office, Romero said.

The materials collected by law enforcement agencies, first reported by the New York Daily News, indicate that investigators may be launching a probe into the hiring practices of the president's golf club.

A spokeswoman for New Jersey Attorney General Gurbir Grewal said the office's policy is "to neither confirm nor deny investigations." The FBI declined to comment.

So, suddenly, someone in San Francisco thinks it's bad to hire illegal aliens?
Posted by Fritz at 9:24 AM