In advance, Trump softened the enemy defenses with a barrage of anti personnel tweets. Da Beast: Trump Goes Off On Mueller, Comey, Rosenstein Ahead of New Russia Bombshells.

Then, the main event. Sentencing memo's for Michael Cohen were received from the Mueller's attack dogs, and the Southern District of New York (read New York City). Ace: Sentencing Memo on Michael Cohen Released; Claims Cohen Did Not Cooperate With Investigators, Recommends a "Substantial" Term of Imprisonment. Mueller:


"He also has gone to significant lengths to assist the investigation. He has met with the SCO on seven occasions, voluntarily provided the SCO with information about his own conduct and that of others..."
. . .
"The government does not take a position with respect to a particular sentence to be imposed but submits that it is appropriate for any sentence of incarceration to be served concurrently."


"Cohen repeatedly declined to provide full information about the scope of any additional criminal conduct in which he may have engaged or had knowledge." . . . "Cohen only met with the Office about the participation of others in the campaign finance crimes to which Cohen had already pleaded guilty. Cohen specifically declined to be debriefed on other uncharged criminal conduct, if any, in his past." . . ."A Substantial Term of Imprisonment Is Warranted" 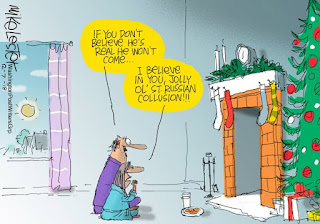 Prosecutors say that by lying, Manafort violated his plea deal, which means the government shouldn’t have to hold up its end of the bargain, including agreeing to a request by Manafort for a lesser sentence.

“Manafort told multiple discernible lies — these were not instances of mere memory lapses,” prosecutors wrote.
. . .
Manafort’s lawyers are due to respond to the special counsel’s office’s filing by Dec. 12. They may not directly address the allegations, but could instead suggest a longer-term briefing schedule, seek to gather evidence, and ask the court to hold a hearing. Mueller’s office said in Friday’s filing that it was prepared to prove that Manafort lied at a hearing. US District Judge Amy Berman Jackson ultimately will have to decide if Manafort did in fact breach the agreement.

MANAFORT ACCUSED OF 'DISCERNIBLE LIES'... , MEMO..., Contacts with admin while under investigation..., 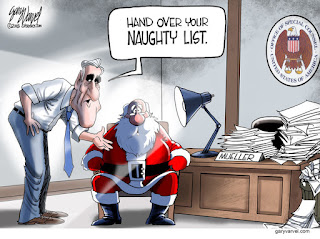 Wombat-socho's In The Mailbox: 12.06.18 has Just One Minute's Mueller Skepticism In Vanity Fair; The Resistance braces for disappointment and Volokh Conspiracy: Professor Dershowitz Responds

Bungling Bob Mueller indicted his chief witness for lying -- and then cut a no-prison deal. I keep mentioning this because it is hilarious.

But as crunch time approaches, we learn that instead of nailing President Trump -- who is as pure as Ivory Snow -- the Team Anti-America that Mueller assembled may have gathered evidence that will indict Obama's White House lawyer and a top Democrat lobbyist.  I would roll on the floor laughing but I am lazy.

"The inquiries center not only on Craig and Podesta -- a Democratic lobbyist and co-founder of the onetime lobbying powerhouse known as the Podesta Group -- but also on Vin Weber, a former GOP congressman from Minnesota. 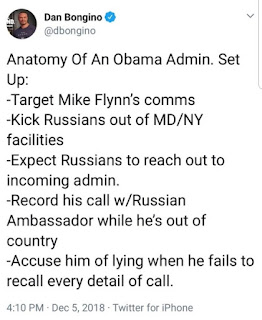 Howard J. Warner at the American Thinker: Flynn sentencing memo reveals the sham that is the Mueller investigation, NewsMax: Flynn Sentencing Memo Is Not Ominous Fox: Judge Andrew Napolitano: Why I don't believe that Mueller is on a fishing expedition (or is about to go home). CNN: The frantic scramble before Mueller got the job

In the days immediately after Comey was fired, McCabe pushed for the appointment of a special counsel but Rosenstein seemed hesitant, despite many calls to do so.

On May 11, two days after Comey was fired, Rosenstein briefed Republican Senate Intelligence Chairman Richard Burr of North Carolina and the panel's top Democrat, Virginia Sen. Mark Warner, who were running their own Russia investigation. According to contemporaneous text messages between FBI officials, "Warner conveyed that he wanted (a) special counsel" and Rosenstein "said he took that under advisement."

McCabe and Rosenstein later met with the full "Gang of Eight," the Republican and Democratic congressional leaders and intelligence committee heads, the day Mueller was appointed.

Separately, Comey was orchestrating his own campaign to create public outcry for a special counsel. The former FBI director had a key memo about his interactions with Trump leaked to The New York Times, which published an article that Trump had asked Comey to go easy on Flynn on May 16. Mueller was appointed the next day.

It is not clear why the FBI first moved to open a case just before the appointment of a special counsel. However, the investigation of the President could have been seen as an impetus for having an independent team investigate given the sensitivities. At the time, those pushing for special counsel were focused on protecting the Russia investigation from further efforts by Trump to curtail it.


House Republicans were left frustrated after former FBI Director James Comey's lawyers prevented him from answering a number of key questions during Friday’s closed-door testimony before the House Judiciary and Oversight committees, according to reports.

The committees are expected to release a transcript of the deposition as early as this weekend.

Even while the questioning was still underway, GOP lawmakers were telling reporters that "they weren’t satisfied and might try to bring him back another day," the AP reported. Following his testimony, Comey said he would return to answer more questions on December 17.

He should spend those two weeks in the House's hoosegow.


Comey had two attorneys with him, Issa said, one of whom was a DOJ attorney who advised him "time and time again" not to answer key questions about their investigation into FBI malfeasance in 2016. He told Fox News that Comey followed the lawyer's advice with “gleeful acceptance.”


A long email chain that included James Comey and key Russia probe investigators is a damning bit of evidence against the former FBI Director according to House Intelligence sources who spoke with John Solomon. It has only recently been obtained.

The documents are classified and House Intelligence Committee Chair Devin Nunes added this chain of emails to the other 12 documents he wants de-classified.

In early to mid-October of 2016, the emails show potential abuses of the Foreign Intelligence Surveillance Act (FISA) that the majority of members of Congress have not been allowed to see as they investigate FISA abuse.

This point in October was BEFORE they obtained the FISA warrant to spy on Carter Page, a Trump campaign adviser. The FBI had concerns about the dossier but did not reveal them to the court

The communications show the FBI knew there were serious intelligence community concerns about the reliability of the main evidence used to support it, namely the Christopher Steele dossier.

The FBI has continually said they didn’t know this before they secured the warrant.


It will be really interesting to see the details of James Wolfe’s sentencing memo, because some (not us) have speculated Wolfe’s minimal charges were due to cooperation with the DOJ on larger constructs. According to the original indictment, James Wolfe leaked “classified” and “top secret” information from the Senate Intelligence Committee to the media. However, Wolfe was only charged with one count of lying to the FBI.

CTH suspects the reason for the minimal charges, is specifically because the corrupt DOJ (Rosenstein) is providing cover to the corrupt SSCI (Warner/Feinstein/Burr); and Wolfe has not been a cooperating witness – because he was never asked to cooperate in an investigation the DOJ never intended to pursue.

Remember, James Wolfe was the Senate security chief found literally sleeping with the media, and leaking secret Senate documents, including a copy of the Carter Page FISA warrant, to his mistress.

Did you hear that Trump nominated William Barr, Bush 41's old AG to be the new "permanent" AG?.  Bill Barr 1991: The DOJ Cannot Tolerate Political Interference With The Enforcement Of The Law Democrats immediately lost any love they had for Bush the elder:


Sen. Charles E. Schumer (D-N.Y.) said in a statement that Barr would “have a steep hill to climb in order to be confirmed by the Senate.”

Well, Barr has said that Comey deserved to be fired for stepping into the Lynche's shoes as AG, and that he thought it showed bad judgment for Mueller to pick a solidly anti-Trump team (but as we've seen, the team already existed; they picked Mueller to be their titular head).

I assume he'll be confirmed with pro-forma opposition from Senate democrats.
Posted by Fritz at 9:30 AM