Arrghh, too much again! Let's wade right in. It's pretty clear that the House Democrats want to impeach Trump, and Mueller wants to find a pretext. Red State: President Trump Is Going To Be Impeached The Question Is How Much Damage It Does Answer? They don't care; it's revenge for the Clintons, first for impeaching Bill, and second for beating Hill. Mediaite:  Watergate Journo Bernstein: ‘For The First Time In His Life’ Trump ‘Is Cornered’ Due to Mueller Probe. S. Noble: Democrats Plan for the President’s Impeachment & Imprisonment  Like much of politics, they'll make it up as they go along. Powerline: A potential theory of impeachment

If the New York Times is right, Mueller’s theory of wrongdoing by President Trump boils down to “defraud[ing] voters.” This theory is worthy of ridicule. . . . 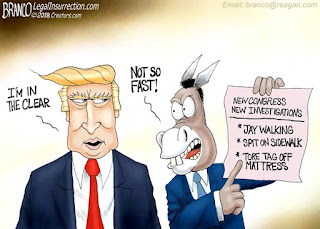 WaEx, Byron York: Sudden shift in get-Trump talk; now it's campaign finance, not Russia. By any means necessary.  Peter van Buren at the American Conservative: Mueller’s Investigation is Missing One Thing: A Crime. Show me the man, and I'll make you a crime.


And that’s the giveaway to Muller’s final report. There was no base crime as the starting point of the investigation. With Watergate, there was the break-in at Democratic National Headquarters. With Russiagate you had…Trump winning the election. (Remember too that the FBI concluded forever ago that the DNC hack crime was done by the Russians, no Mueller needed.) 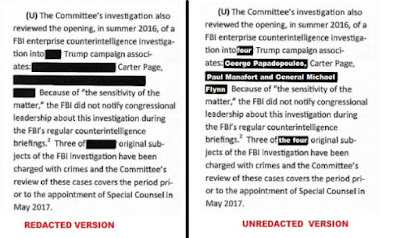 The transcript from the first James Comey interview with the joint house committee is rather revealing for several measures. One of the more interesting aspects surrounds Comey claiming the FBI never investigated the Trump campaign; and yet also claiming four Trump campaign officials had FBI investigative files opened on them simultaneously.

Apparently, Comey wants everyone to believe it was a coincidence or something.

Additionally, within his ‘interview’ Comey confirmed our previous hunch on a very specific redaction within the Nunes memo:

Daniel John Sobieski at Flopping Aces: Perjurer Comey Lied About Flynn, FISA, Long-standing Lucrative Mueller Friendship. But it's not illegal when they do it. Liz Shield at PJ Media, Good Monday morning.  "Tell me some more how I am a conspiracy theorist and there's no anti-Trump deep state"

Ace has the best headline: Nonpartisan Unbiased Lifelong Republican Reverend Jim Comey: We Have Use "Every Breath We Have" To Push Trump Out of Office.

There are only two ways to explain this:

Either he was already incredibly biased against Trump at the start of of his "investigation" and therefore should have recused himself, or started unbiased but became outraged, radicalized, and insane because Trump decided he wasn't doing a good job and fired him.

Neither is very reassuring about this "investigation," the FBI, or the permanent Derp State of bureaucratic Washington.

Don Surber: Obama spied on Trump illegally, and Comey went along with it.


Solomon wrote in The Hill, "The failures of Comey’s remarkably turbulent and short tenure as FBI director were on display again Friday on Capitol Hill, when he was interviewed in a closed-door session by two House committees. Republican lawmakers were aghast at his sudden lack of recollection of key events.

"He didn’t seem to know that his own FBI was using No. 4 Justice Department official Bruce Ohr as a conduit to keep collecting intelligence from Christopher Steele after the British intel operative was fired by the bureau for leaking and lying. In fact, Comey didn’t seem to remember knowing that Steele had been terminated, according to sources in the room."

He was paid off to keep his mouth shut through (ironically) a book deal. Just like Stormy Daniels, Christine Ford, the Clintons and of course, Ma and Pa Obama.

ABC: Maria Butina, accused Russian agent, reaches plea deal with prosecutors that includes cooperation. Two points to note. First, this is not a Mueller prosecution. Second, she is pleading guilty to basically being an unregistered lobbyist, not a spy.

American Greatness, Will the Leakers in the Flynn Case Escape Justice? Probably, but I would be all for waterboarding David Ignatius to find out who it is. It's almost certainly in the CIA.

AllahPundit, Rubio: If Trump Pardons Manafort, We Might Need A National Debate About Amending The Pardon Power. The art of conversation has been lost. 538, Why It Might Be Impossible To Overturn A Presidential Pardon. Because the pardon power is in the Constitution, and the Congress can't touch it. The Supreme Court would probably dodge it.