Yep, still happening. First, Powerline tells us What we have learned so far (3)

A transcript [of former FBI Director James Comey’s testimony to two House Committees in] the closed-door hearing [last week] shows Comey confirmed that he evaded standard protocol – which would have required the FBI to work through the White House Counsel’s Office and Justice Department leadership – when he sent two FBI agents to question Flynn in the first days of the Trump administration. [We posted the transcript here.]

Comey boasted that excluding Justice Department and White House lawyers from the questioning of Flynn is “something we, I, probably wouldn’t have done or maybe gotten away with in a more organized investigation, a more organized administration.”
. . .
Many observers have asked why Flynn would lie about a detail involving his discussions of sanctions with Russia’s ambassador. After all, it was his job as the incoming national security adviser to make contact with important foreign governments.

Flynn would also know, as a former head of the Defense Intelligence Agency, that the FBI regularly monitors the electronic communications of foreign diplomats.

But the overlooked question is this: Why did Comey and the FBI go to such extreme lengths to catch Flynn in a lie, when he had violated no federal law?

Under questioning before the House Judiciary Committee, Comey claimed that the FBI has the duty to “understand why it appeared to be the case that the National Security adviser was making false statements about his conversations with the Russians to the Vice President of the United States.”

But as Gowdy and others made clear, it is not the FBI’s job to make sure politicians tell the truth to each other. If it was, the FBI would be so busy it would never get to its real mission of investigating federal crimes.

Dr. John at Flopping Aces,  Sorry, Virginia, there is no Huber Claus. Maybe by next Christmas. Jonathon Turley at Da Hill tries to explain The Steele Dossier and the perils of political insurance policies


Throughout the campaign, and for many weeks after, the Clinton campaign denied any involvement in the creation of the dossier that was later used to secure a secret surveillance warrant against Trump associates during the Obama administration. Journalists later discovered that the Clinton campaign hid the payments to Fusion as a “legal fees” among the $5.6 million paid to the law firm. New York Times reporter Ken Vogel at the time said that Clinton lawyer Marc Elias had “vigorously” denied involvement in the anti-Trump dossier. When Vogel tried to report the story, he said, Elias “pushed back vigorously, saying ‘You (or your sources) are wrong.’” Times reporter Maggie Haberman likewise wrote: “Folks involved in funding this lied about it, and with sanctimony, for a year.” Even when Clinton campaign chairman John Podesta was questioned by Congress on the matter, he denied any contractual agreement with Fusion GPS. Sitting beside him was Elias, who helped devise contract.

Later, confronted with the evidence, Clinton and her campaign finally admitted that the dossier was a campaign-funded document that was pushed by Steele and others to the media.

In one of his answers to an interrogatory, Steele explained: “Fusion’s immediate client was law firm Perkins Coie. It engaged Fusion to obtain information necessary for Perkins Coie LLP to provide legal advice on the potential impact of Russian involvement on the legal validity of the outcome of the 2016 U.S. Presidential election. Based on that advice, parties such as the Democratic National Committee and HFACC Inc. (also known as ‘Hillary for America’) could consider steps they would be legally entitled to take to challenge the validity of the outcome of that election.”

Steele’s testimony suggests that the dossier was not just a political hit job but a type of insurance for a catastrophic political event.
. . .
The submission of at least one of Mueller’s reports may be just weeks away. Regardless of whether he finds crimes, it was important for this investigation to reach its proper conclusions. Yet, no matter how it ends, concerns will remain over how it began ... as a political insurance plan.

And Trump's election was that catastrophic political event at least in their minds. At Da Hill, Schiff: Democrats will subpoena Mueller report if Trump tries to hide it. Fortunately, the Obama DOJ established the precedent of ignoring congressional subpoenas. 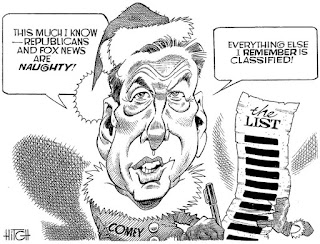 From The Lid, James Comey Lies About Shutdown Payroll, Gets Smacked Around On Twitter. It won't matter, he's shameless.


FBI families will spend Christmas without a paycheck. This president promised Mexico would pay for the wall but innocent people are now paying the price for another lie. Our thoughts are with hardworking public servants and their families.
— James Comey (@Comey) December 23, 2018


Per OMB guidance, checks for Pay Period 26 (December 9-22) will be processed as usual. Which means federal employees will get their normal direct deposit between December 28 and January 3.

It's the paychecks *after* that, starting with Pay Period 1, that are stopped. https://t.co/RT1wroDWWr
— Gabriel Malor (@gabrielmalor) December 23, 2018


I really wish you would fade away. You have done more to destroy the reputation of the FBI than any man in history.
— Mark (@MoeMalde) December 24, 2018