The Left Hand of Sharkness


Australian researchers recently bred Port Jackson sharks in a tank warmed to a temperature likely to occur at the end of the century if climate change continues unabated. These warmer waters made the sharks right-handed.

Australian scientists went snorkeling for shark eggs, then incubated those eggs in a special tank designed to simulate the hot, end-of-century temperatures expected to prevail if climate change continues unabated. Half of the sharks died within a month. The other half became right-handed.

The team of biologists from Macquarie University in Sydney knew from previous research that warming ocean temperatures alter the way fish grow and develop. The researchers wanted to find out whether these changes would also affect fish behavior — specifically, whether sharks raised in a tank warmed to projected end-of-century temperatures would show a preference for swimming one direction or another when faced with a Y-shaped pathway. Basically, could global warming make sharks right- or left-handed? 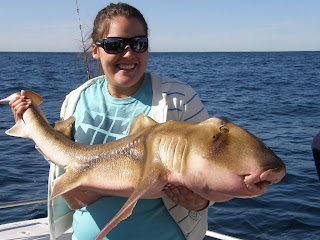 And why would we be tempted to ask that question?


Sharks, you may be tempted to point out, don’t actually have hands (they have fins, which are genetically not so far off from human arms). So, when scientists talk about the right or left “handedness” of sharks and other marine creatures, they’re talking about lateralization: the tendency for one half of an animal’s brain to automatically control certain behaviors. With simple, automated behaviors (say, your preference for writing with your right or left hand), this theoretically frees up mental energy for an animal to perform more-complex cognitive functions. In fish, lateralization might mean a default preference for swimming a certain way, which can help those fish forage for food or form schools.

“Since behavioral lateralization is an expression of brain function, it can be used as a barometer of normal brain development and function in some contexts,” the researchers wrote in a study published this summer in the journal Symmetry. “Namely, exposure or development under climate change conditions.” 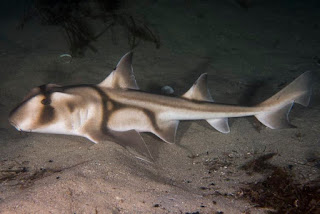 
To test whether warmer waters could force a shark to become lateralized, the researchers collected a clutch of Port Jackson shark eggs from the waters off of eastern Australia. The scientists incubated 12 eggs in a tank warmed to the current ambient temperature of the bay (about 70 degrees Fahrenheit, or 20.6 degrees Celsius) and 12 others in a tank that was gradually warmed to 74.5 degrees F (23.6 degrees C) to simulate those predicted end-of-century ocean temperatures.

Five sharks incubated in the elevated temperatures died within a month of hatching. To test whether the remaining sharks had developed lateralization, the team placed each of those animals in a long tank with a Y-shaped partition at one end. Behind the partition was a food reward; sharks just had to decide whether to swim to the right or left side of the Y to reach their snack.

The authors found that sharks incubated in the elevated temperatures showed a strong preference for turning right. The sharks in the control group showed no preference one way or the other.

Read the rest of the story here.

Sounds like a pretty hokey study. Small sample size (7 sharks). So you take cold water sharks, raise their temperature artificially, killing almost half of them in the process, and are surprised that the remaining sharks act funny? In the real world, the sharks would simply move to cooler waters.

The Wombat has Rule 5 Sunday: Eliza Dushku up at The Other McCain.
Posted by Fritz at 10:07 AM