Crabs and Oysters, Oh My!

From the annals of all the thing climate change might, or might not cause, two articles by way of Watts Up With That. First, from the UK, Climate change poses significant threat to nutritional benefits of oysters


The nutritional qualities of shellfish could be significantly reduced by future ocean acidification and warming, a new study suggests.

Research has previously shown that climate change could threaten future production, safety and quality by negatively impacting the fitness of marine species.

Now scientists from the University of Plymouth, in a study published in Marine Environmental Research, have demonstrated the potential for negative nutritional effects within economically and commercially valuable species.

The research focussed on the Pacific oyster (Magallana gigas) and the native flat oyster (Ostrea edulis), with results showing that increased temperatures and CO2 levels could significantly reduce the former’s levels of proteins, lipids and carbohydrates.

With seafood being the source of more than 15% of animal protein consumed globally, scientists say the aquaculture industry may wish to consider a shift in focus toward species that are most robust to climate change and less prone to deterioration in quality.

Dr Anaëlle Lemasson, a former PhD student at the University, led the research having previously shown that although the physiology of the Pacific oyster can be negatively impacted by future climate change, its taste might not be adversely affected.

She said: “Identifying changes in nutritional quality, as well as species most at risk, is crucial if societies are to secure food production. Our previous research had suggested there could be negative effects in the conditions predicted to occur in 2050 and 2100. However the fact that Pacific oysters, which currently accounts for around 90% of UK oyster production, can be affected could be a cause for concern.”

A fun fact is that while oysters are their juiciest and most succulent in cool months (all the months with "R" in them), oysters do most of their growing in the warmer months, and are thinner and waterier because those are the months they spawn in. During cool months, when lower temperatures restrict their metabolism, and rate of growth, oysters pack on the "fat" (in their case, mostly glycogen, a molecule often called animal starch), for growth and gamete production in the warmer months. I doubt that water temperatures in the UK are going high enough in winter to make much of a difference. 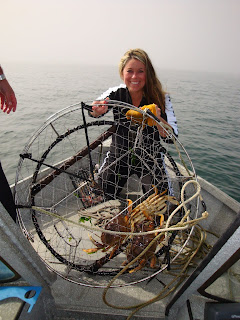 Second, from the left coast, Fishermen Sue Big Oil For Its Role In Climate Change


On Nov. 14, fishermen in California and Oregon joined the legal fray by filing suit against 30 companies, mainly oil producers. The Pacific Coast Federation of Fishermen’s Associations, the plaintiff, contends that the fossil fuel industry is at direct fault and must be held accountable for recent warming-related damages to the West Coast’s prized Dungeness crab fishery, which catches millions of the tender-fleshed crustacean most years, and coastal chefs turn the critters into classics like Crab Louie and Crab Cioppino.

The fishermen’s lawsuit appears to be the first time food producers have sued the fossil fuel industry for allegedly harming the environment.

Since 2014, the northeast Pacific Ocean has experienced several dramatic marine heatwaves. The higher temperatures have caused blooms of toxic algae that, by producing the neurotoxin domoic acid, can make Dungeness crab and other shellfish unsafe to eat. In the fall of 2015, state officials in California and Oregon delayed the opening of crab season by several months, until testing finally showed domoic acid levels had dipped back to safe levels. Several similar closures have occurred since, including this year. 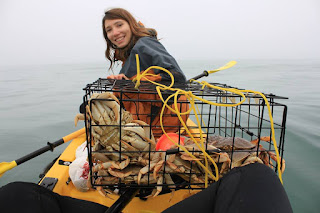 
Noah Oppenheim, the executive director of the Pacific Coast Federation of Fishermen’s Associations, says the 2015-2016 crab fishing closure resulted in direct financial losses that caused some boats in the fleet of about 1,000 to leave the fishery. Subsequent closures, also caused by domoic acid concerns, have further strained the industry, which in California and Oregon is worth about $445 million, Oppenheim says. 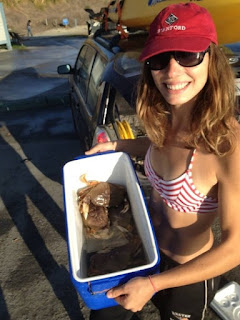 Why did algae evolve domoic acid before global warming?

Dungeness crab fishermen in California have been allocated about $15 million, according to Oppenheim, of a $200 million federal disaster relief package, approved earlier this year to help fishermen in the fallout of several fishery disasters, including salmon run failures in northern California. Oppenheim says crab fishermen “appreciate the help” from taxpayers but that the general public should not be on the hook for damages resulting from warming oceans. 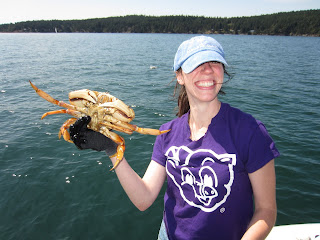 2014-2016 was the period of a large (but by no means unprecedented) El Nino event, a climatic pattern that produces warm water intrusions along the United States Pacific Coast. In contrast, we had El Ninsnowmaggedocoplypse, a cold, and snowy winter.

“The financial harm should be covered by those perpetrating it,” he says.

Sources within the oil industry would not discuss the lawsuit. Exxon’s corporate media relations manager Scott J. Silvestri emailed The Salt a statement:

“Reducing greenhouse gas emissions is a global issue and requires global participation and actions,” he wrote. “Lawsuits like this – filed by trial attorneys against an industry that provides products we all rely upon to power the economy and enable our domestic life – simply do not do that.”

Sean Comey, the senior advisor of policy, government and public affairs with Chevron Corporation, says in an email that the crabbers’ lawsuit “is without merit and counterproductive to real solutions to climate change.” He says fossil fuel production “has been lawful and encouraged by governments” and is “vital to the global economy.”

I would expect, therefore, that the fisherman are using electric crab boats? Because using diesel or gasoline would be harmful to the fishery.

Wombat-socho has Rule 5 Sunday: Babe In Toyland out on time at The Other McCain (shouldn't that be the remaining McCain?).
Posted by Fritz at 6:36 PM